Nowadays, ultrasound scans are quite common in hospitals. Especially, foetuses of pregnant women are frequently scanned using ultrasound to check if the foetus is growing without any medical complications. The term “sonogram” is also one that is used in the context of ultrasound scans. The main difference between sonogram and ultrasound is that ultrasound refers to both a type of sound wave whose frequency is too high for it to be audible to humans and also to a type of medical examination where ultrasound waves are used to investigate the internal organs or foetuses of humans or animals. In contrast, a sonogram is an image produced as a result of an examination using ultrasound.

Ultrasound is widely used in medicine to scan internal organs or foetuses. In these scans, ultrasound pulses are sent into the patient’s body using a transducer. The sound wave enters the body and travels through the body. When the sound wave meets a boundary (for instance, a boundary between two organs), the wave is partially reflected back towards the transducer. The strength of the reflection depends on the nature of the boundary.

By measuring the time between the when the pulses were emitted and when they are received back again, the distance between the different organ boundaries could be calculated. By looking at the relative strengths of the reflected pulses, the nature of the boundaries could also be determined.

What is a Sonogram

A sonogram is an image of internal organs or foetuses that can be built up using an ultrasound scan. There are two main types of ultrasound scans: A-scans and B-scans. An A-scan produces a graph that plots the amplitude of the reflected sound waves as a function of time. A B-scan collects this data over a region to produce an image using the data. The video below shows a demonstration of how this is done for the eye:

Sonograms are most frequently used to take images of foetuses. An example of such an image is shown below: 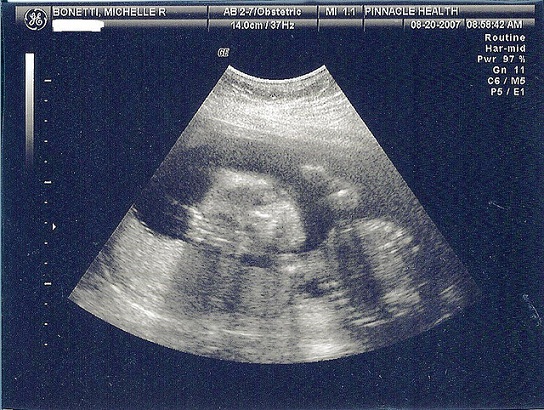 A sonogram of a foetus

At times, ultrasound scanning is referred to as “sonography“. In this sense, the term sonography refers to the scanning procedure and if an image is produced, it is still called a sonogram.

Difference Between Sonogram and Ultrasound

Ultrasound refers to either a type of sound wave that has a frequency higher than the audible frequency range for humans, or to a type of medical procedure where a body is scanned in order to glean information about the internal structure of a person or an animal.

Sonogram refers specifically to an image produced as a result of an ultrasound scan.