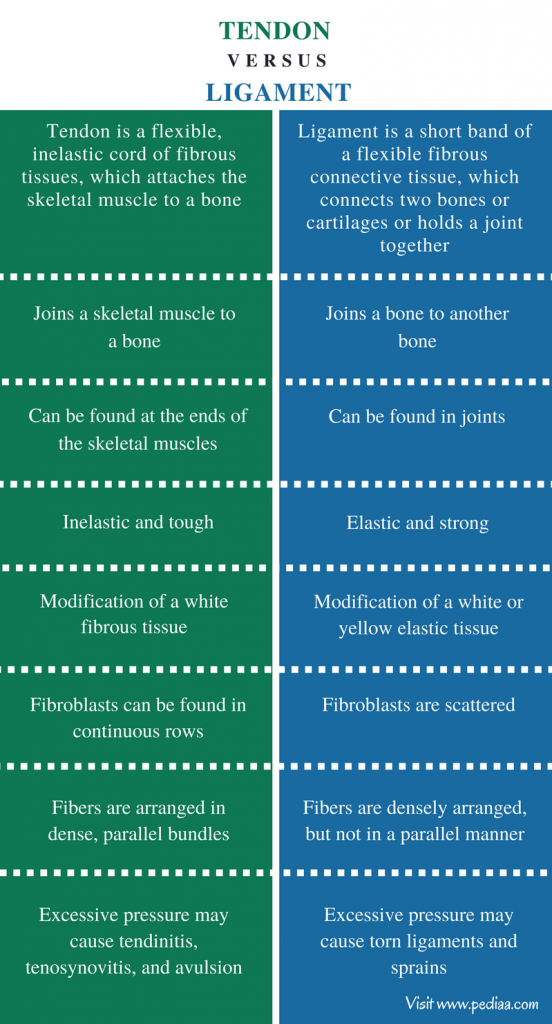 What is a Tendon

A tendon is a tough cord of dense white fibrous connective tissue, which unites muscles with a bone, transmitting the forces exerted by muscles to the bone. Tendons can be found at the end of the skeletal muscles. Tendons have the highest tensile strength among other soft tissues in the body. This tensile strength is important to withstand the stress generated during muscular contractions. The tensile strength is caused by the tissue composition and the parallel orientation of connective tissue fibers. Tendons in the hand are shown in figure 1. 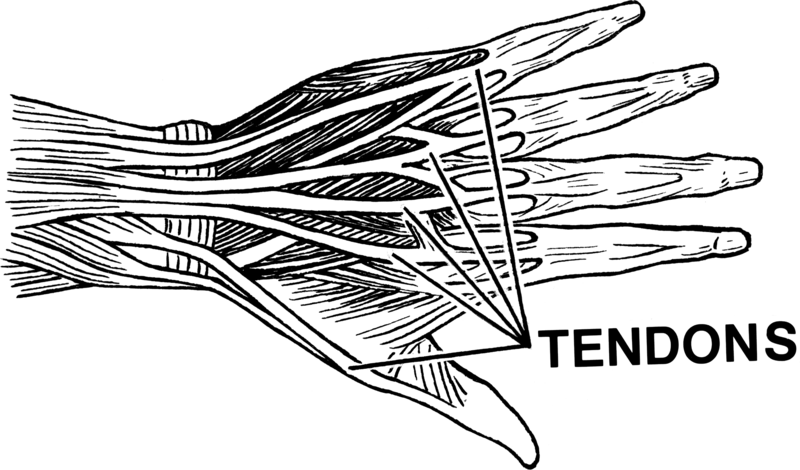 Figure 1: Tendons in the Hand

What is a Ligament

A ligament is a tough band of fibrous connective tissues that connect articular extremities of bones. The fibrous connective tissue of ligaments is made up of highly dense collagen fibers, spindle-shaped cells called fibrocytes, and a very few ground substances. The two types of ligaments are white fibrous ligaments and yellow fibrous ligaments. Since white ligament is composed of more collagen fibers, it is more sturdy and inelastic. The yellow ligament is rich in elastic fibers. 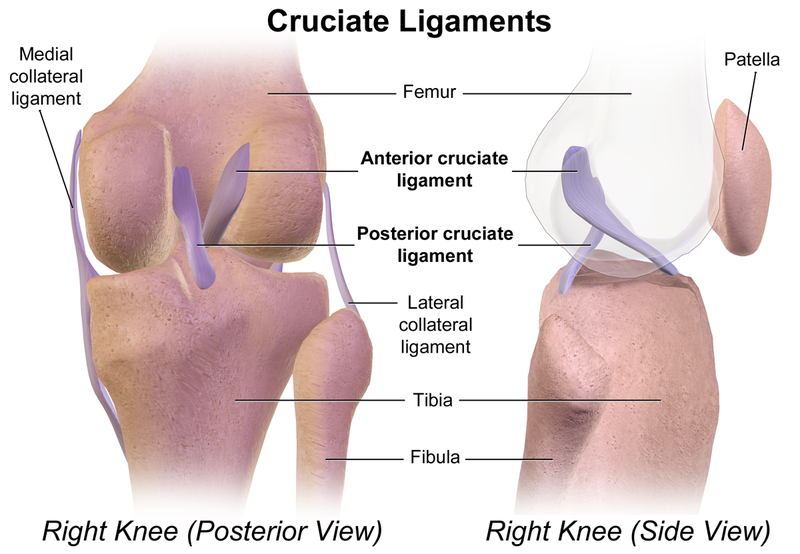 Figure 3: Ligaments in the Knee Joint

Ligaments enclose the articulated ends of bones. They also lubricate the synovial membrane. The ligaments in the knee joint are shown in figure 2.

Similarities Between Tendon and Ligament

Difference Between Tendon and Ligament

Tendon: Tendon is a flexible, inelastic cord of fibrous tissues, which attaches the skeletal muscle to a bone.

Ligament: Ligament is a short band of a flexible fibrous connective tissue, which connects two bones or cartilages or holds a joint together.

Tendon: A tendon joins a skeletal muscle to a bone.

Ligament: A ligament joins a bone to another bone.

Tendon: Tendons can be found at the ends of the skeletal muscles.

Ligament: Ligaments can be found in joints.

Tendon: A tendon is inelastic and tough.

Ligament: A ligament is elastic and strong.

Tendon: A tendon is a modification of a white fibrous tissue.

Ligament: A ligament is a modification of a white or yellow elastic tissue. Ligaments contain collagen fibers.

Tendon: Fibroblasts can be found in continuous rows in a tendon.

Ligament: Fibroblasts are scattered in a ligament.

Tendon: Fibers are arranged in dense, parallel bundles in a tendon.

Ligament: Fibers are densely arranged in a ligament but not in a parallel manner.

Tendon: The elongated tendon cells can be found in between the fiber bundles of the tendon.

Ligament: the elongated tendon cells can be found in between fibers of the ligament.

Tendon: Excessive pressure may cause tendinitis, tenosynovitis, and avulsion.

Ligament: Excessive pressure may cause torn ligaments and sprains.