Every polymer is degradable. They degrade in mass, strength and molecular weight with time. Most of the polymers that we already knew, have a period of 100-1000 years to degrade in fully. The specialties in biodegradable polymers are, they degrade quickly when comparing to non- biodegradable polymers and their byproducts are eco-friendly (biocompatible) such as CO2, water, methane, and inorganic compounds or biomass that is easily scavenged by microorganisms. 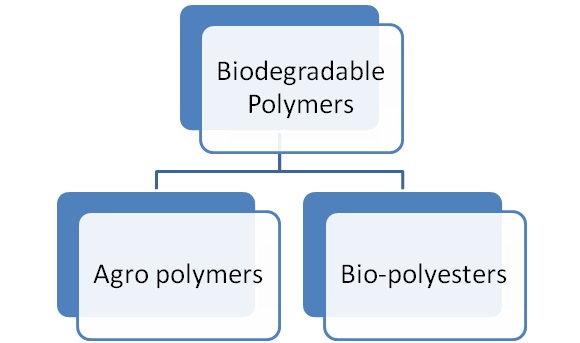 Biodegradable polymers can be categorized under two main topics according to their formation method.

The second type of agro polymers are proteins that are made out of amino acids. The most significant feature in proteins is that they are renewable. The proteins are widely used in the food industry. Soy protein, corn protein and wheat protein are among the plant proteins and Casein, Collagen, gelatin and keratin are the types of extensively used animal proteins. Lactate dehydrogenase, chymotrypsin, and fumarase are the main bacterial proteins. Even though these types of polymers are mainly used in the food industry, still the packaging industry did not find a way to replace conventional plastics with agro polymers.

Lactic acid is a well-known, widely used biopolymer in many industries. It exists in two forms as L- lactic acid and d-lactic acid. They can be produced by two different ways, either biologically or chemically. In the biological method, the carbohydrates fermentation is done by Lactobacillus ( bacteria) or fungi. Lactic acid can also be produced through chemical chain reactions. We can also experience this reaction in our body when having tired muscles. Industrially lactic acid is mainly used to produce cosmetics.

Polyhdroxyalkanoates (PHA) are a family of intracellular biopolymers synthesized by many bacteria as intracellular carbon and energy storage granules. PHAs are utilized in the industry of packaging and medical due to their biodegradability.

Biomaterials directly contact living cells. There are two typical uses in biomaterials. The first one is biomaterials as disposal products such as blood bags, catheters and syringes. The second usage is as materials supporting surgical operations. It can be either for prosthesis for tissue replacement such as lens, dental and breast replacements or as artificial organs such as artificial hearts and artificial kidneys.

Drug delivery systems use biodegradable polymers for their task. Both invasive and non-invasive methods of drug delivering can be taken into this. In this case these polymers just act as a transporter and after delivering the drug to the desired part they will quickly absorb into the body without a harmful effect. The simplest case you may have seen is the pill covers and the coatings in different colors. The drug is included inside the cover and that cover should be excreted without affecting the body. These covers and coatings are made out of biodegradable polymers.

• Biodegradable polymers are the types of polymers that degrade within a short time and their byproducts are eco-friendly.

• It is a good solution for the environmental pollution occurred due to the non-degradable plastics.

• There are two main types of biodegradable polymers.

• They are agro polymers and bio-polyesters.