Home » Science » Chemistry » What are the properties of Alkanes

Alkanes contain only Carbon and hydrogen atoms. They have only single bonds between Carbon atoms (C-C bonds). They are called “saturated hydrocarbons.” Organic molecules that are formed with only Carbon and Hydrogen atoms are called “hydrocarbons.” According to the orbital hybridization model, all the carbon atoms in Alkanes have the SP3 hybridization. They form sigma bonds with Hydrogen atoms resulting the molecular geometry like a tetrahedron.

Alkanes have the general molecular formula CnH2n+2. The smallest alkane is Methane (CH4).

Acyclic alkanes: There is no ring formation in the structure. However, it can have branched or unbranched molecular arrangements. Unbranched Alkanes are sometimes called n-alkanes. 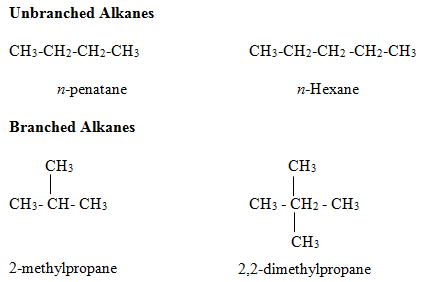 Cycloalkanes: There is a circular molecular arrangement in the structure. Cycloalkanes have the general formula CnH2n.

Alkanes are inert to many chemical reagents. “Paraffin” is an old name for hydrocarbons. It is derived from the Latin word “parumaffinis,” which means “with little affinity”. The reason is Carbon–Carbon (C-C) and Carbon–Hydrogen (C-H) bonds are quite strong. It is very difficult to break their bonds unless alkanes are heated to fairly high temperatures. The C-H bonds are also strong,  because Carbon and Hydrogen atoms have nearly the same electronegativity values.

Alkanes can readily burn in the air. Reaction between Alkanes with excess Oxygen is called “combustion.” In this reaction, alkanes convert to Carbon dioxide (CO2) and water.

The combustion reactions are exothermic, which means they give off heat. Therefore, alkanes can be used as a source of energy.

Alkanes exist in all three forms: as gases, liquids and solids. Methane, Ethane, propane, and butane are gases in room temperature. The unbranched structures of pentane, hexane, and heptane are liquids. Alkanes with higher molecular weight are solids.

Alkanes are a non-polar organic compound. Water is a polar solvent, so alkanes do not dissolve in water. They are said to be “hydrophobic” (means ‘water hating’) compounds. They are dissolved in non-polar or weakly polar organic solvents. Alkanes are used as good lubricants and preservatives for the metals because, they protect the metal surface from reaching water; it prevents corrosion.

For unbranched alkanes, the boiling point smoothly increases as the number of Carbon atoms and the molecular weight are increasing. Larger molecules have a larger surface area providing a greater ability to form van der waals interactions (London force interactions). Though these are weak intermolecular forces, they raise the boiling points and thus prevent vapourisation.

In general, branched alkanes have higher melting points than n-alkane with the same number of Carbon atoms. Branched structure gives a more compact 3D-structure. It easily packs into a solid structure with a high melting point.

Alkanes are chemically stable and usually do not involve in chemical reactions. They are insoluble in polar solvents and soluble in non-polar or weakly polar organic solvents. Alkanes are less dense than water.

Alkanes show isomerism; there are several molecular structures for one molecular formula. Their physical and chemical properties change with the structure.

WHAT ARE THE PROPERTIES OF ALKENES