Home » Science » Geology » What is Earth’s Crust Made of

As human beings who live on the planet Earth we should know what is Earth’s Crust made of. We live on the surface of the earth and everything that we see or use seems to be over this surface. However, earth is not a flat surface, but a spherical planet that is made up of many layers. The innermost layer at the centre of earth is called Core. It is the hottest part of the earth and contains metals in a molten state. While crust is the outermost layer, there is another layer in between this crust and the core. It is called the mantle that is made up of rocks and magma in a semi-solid state. There is no air and water in the core and the mantle and they are too hot for organisms to survive. It is the composition of earth’s crust that is of great importance for the world.

What is Earth’s Crust made of – Facts

Earth’s Crust does not have uniform thickness at all places

The crust of the earth is a thin layer made of different types of rocks. You can think of it in terms of the skin of an apple as this crust has a mass less than 1% of the total mass of earth. The thickness of this crust is not uniform at all places. It is more than 80 km at some places while being less than a kilometer at other places. It is not surprising that the crust is thinnest below the oceans while it is thickest in the continents. Most of the rocks found in this crust are basalt and granite. Silicates make up most of the earth’s crust with a lot of oxygen mixed with them. You would be surprised to know that nearly half of the crust is oxygen. 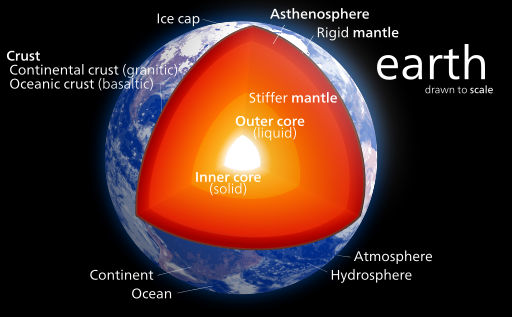 Oxygen is the most abundant element in earth’s crust

As far as chemical composition of earth’s crust is concerned, there are about 12 elements that make up almost 99% of the crust. Oxygen is the most abundant (47%) of these elements with silicon (27%) taking the second place. Some of the other most important constituents of earth’s crust are aluminum, iron, calcium, sodium, potassium, and magnesium. There is no way to know the exact percentage of these elements in earth’s crust as the deepest mine that has been dug goes down to not more 4km beneath the surface of the earth.

Oxygen is the only element that is found in almost all the types of rocks in the crust of the earth. Another interesting fact about the chemical composition of the rocks found in this crust is that nearly all of them contain silicates. Some of the most common of these silicates are feldspars, quartz, mica, pyroxenes, and amphiboles. Less than 10% of the rocks of the crust are classified as non-silicates. They are referred to as sulfides, oxides, and carbonates.