Home » Business » Economics » What is PPF in Economics

Every economy performs with a limited amount of resources, but expects to produce goods and services to satisfy unlimited needs and wants of the individuals. Hence, it is a great importance to allocate these limited resources across an unlimited amount of needs and wants, which is identified as a primary concern of any economy. Production Possibility Frontier (PPF), also known as Production Possibility Curve (PPC) is a concept that discusses this economic problem and illustrates how to make choices in a scarcity situation. This model graphically represents a hypothetical situation of how to make a choice between two goods.

Concept of PPF in Economics

PPF primarily represents a hypothetical boundary between the maximum combination of goods and services that an economy can produce with the available resources and technology. This model is based on three main assumptions.

Example: Assume that a particular economy produces two types of goods: machines and food. Accordingly, the following graph represents the maximum combination of these two goods that can be produced using the scarce resources.

In the following Production Possibility Curve, the graph represents the maximum combination of two goods that an economy can produce utilizing resources and technology optimally. Therefore, the society has to make the choice somewhere within or under the curve. Let’s discuss different areas that are important under PPF concepts. 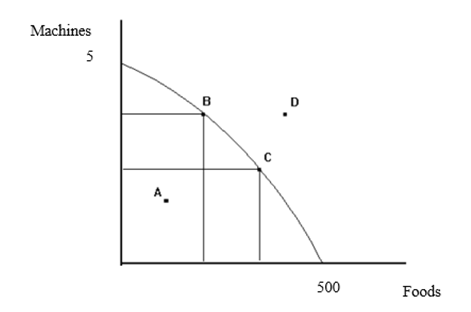 Point A: This is an achievable product combination for an economy with the existing amount of resources and technology. However, this is not an efficient product combination as the society can obtain more goods from both products without sacrificing another good.

Point B and C: These two points are achievable product combinations that can be produced by the existing resources and technology of the economy. These two points are efficient points on the PPF. Point B indicates a choice of more machines and less food whilst point C indicates the reverse. Moreover, if the society needs to move from point B to point C, a certain amount of a product has to be sacrificed. This is identified as the trade-off between machines and food items. On the other hand, since the society has to give up one choice for another, PPF represents the scarcity of resources as well.

PPF can either be shifted to inwards or outwards.

Outward Shift: If a PPF shifts outward to the existing PPF, it indicates that the economy is growing. This may be a result of inventing new technology, an increase in the amount of resources, etc.

Inward Shift: If a PPF shifts inwards, it indicates that the economy is shrinking, resulting in non-optimal resource allocation and loss of productivity. This might be a result of natural disaster or war etc. 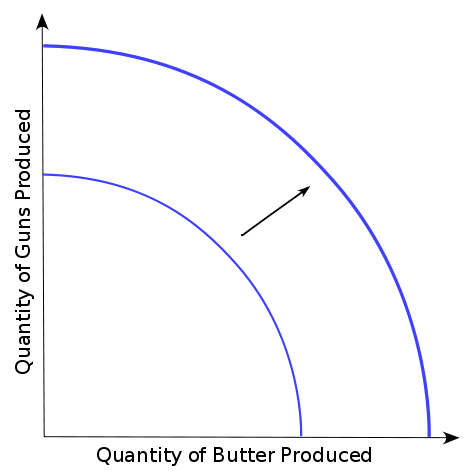 Consequently, if the economy decides to produce one additional unit of the machine, the marginal cost would be, 100 units of food items (100/1).

PPF is a concept that explains the maximum combination of output an economy can produce if it uses its resources and technology in an optimum manner. It is a graphical representation, and the area under the curve represents feasible production quantity of the economy. The concept primarily relies on several assumptions; it assumes that  the economy operates with optimal efficiency, resources and technology are fixed, and that only two types of goods are produced. Furthermore, the PPF concept describes several economic phenomena such as scarcity of resources, opportunity cost, economic growth, etc.