The main difference between 16S rRNA and 16S rDNA is that 16S rRNA is a component of the small subunit or 30S subunit in the prokaryotic ribosome, whereas 16SrDNA is the gene which codes 16S rRNA. Furthermore, 16S rRNA takes parts in the binding to the Shine-Dalgarno sequence on mRNA to be translated while 16S rDNA undergo transcription to produce its gene product, which is the 16S rRNA. Moreover, prokaryotes have multiple sequences of 16S rDNA per genome, and the 16S rDNA is conserved among different species of bacteria and archaea.

16S rRNA and 16S rDNA are two types of nucleotide sequences that occur in prokaryotes. Generally, they are responsible for facilitating the translation of prokaryotic mRNA. 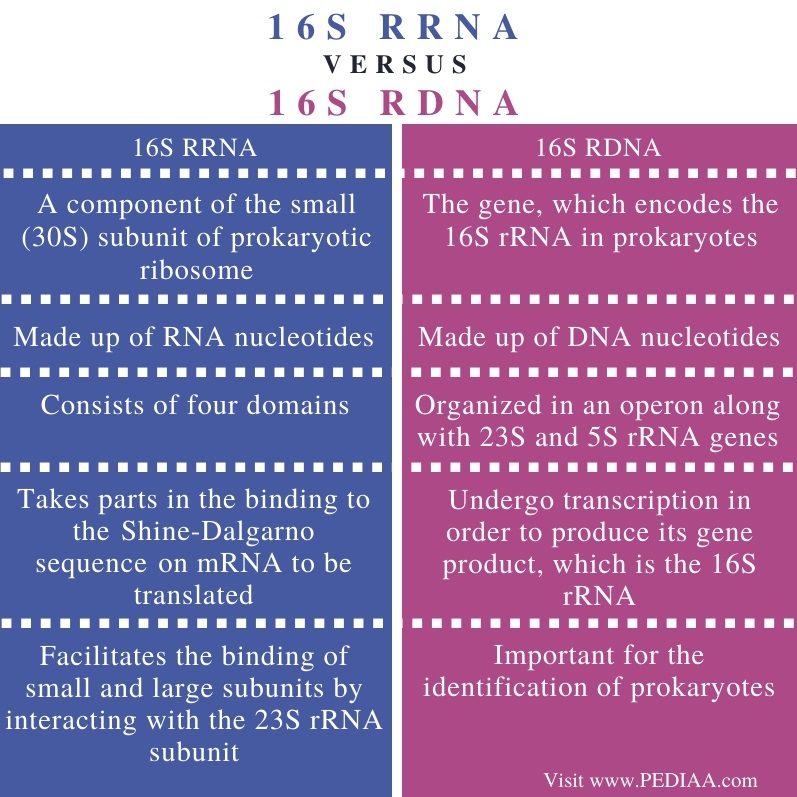 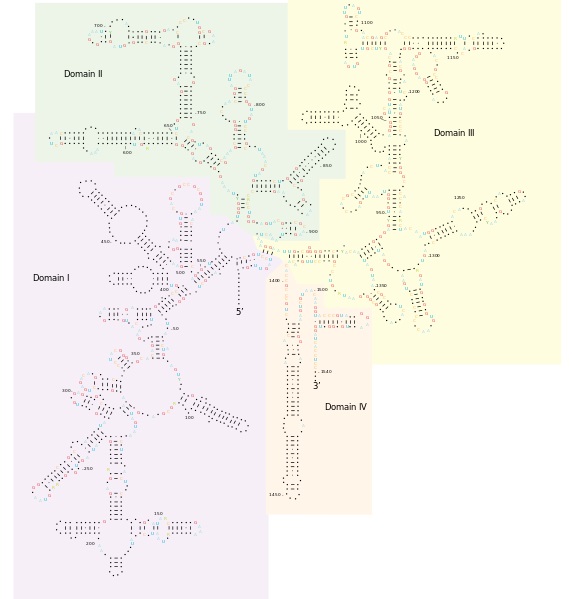 Furthermore, the three-dimensional structure of the 16S rRNA consists of four domains. Also, the 3′ end of the 16S rRNA contains anti-Shine-Dalgarno sequence, which can bind to the Shine-Dalgarno sequence of the mRNA to be translated by the ribosome. Generally, on the mRNA, this sequence occurs around the eight bases upstream of the start codon, AUG. On the other hand, 16S rRNA is responsible for stabilizing the pairing of codon and anticodon in the A-site of the ribosome.

16S rDNA is the gene that encodes 16S rRNA in prokaryotes. However, as most of the functionally-related prokaryotic genes are organized into operons, 16S rDNA also occurs in an operon along with the other two genes responsible for ribosome synthesis. Basically, these other genes are 23S rDNA and 5S rDNA genes. On the other hand, there can be more than one copy of 16S rDNA in the genome of a bacterium.

16S rRNA refers to a component of the small (30S) subunit of prokaryotic ribosome while 16S rDNA refers to the gene which encodes the 16S rRNA in prokaryotes.

While 16S rRNA consists of four domains, 16S rDNA is organized in an operon along with 23S and 5S rRNA genes.

16S rRNA takes parts in binding to the Shine-Dalgarno sequence on mRNA to be translated while 16S rDNA undergo transcription to produce its gene product, which is the 16S rRNA.

Furthermore, 16S rRNA facilitates the binding of small and large subunits by interacting with the 23S rRNA subunit while the 16S rDNA sequence is important for the identification of prokaryotes.

16S rRNA is the type of rRNA which makes up the small subunit of the prokaryotic ribosome. It has a structural role in binding with the large subunit of the prokaryotic ribosome. It also binds to the Shine-Dalgarno sequence on mRNA to be translated, initiating translation. The 16S rDNA, on the other hand, is the gene sequence in the genome, encoding 16S rRNA. Generally, this gene occurs cooperatively with the 23S and 5S rRNA genes in the same operon. Moreover, multiple copies of the same gene sequence may occur in the genome of prokaryotes. Therefore, the main difference between 16S rRNA and 16S rDNA is their function.