Binary fission and conjugation are two methods of reproduction in lower organisms. Generally, both methods produce a particular type of offspring. 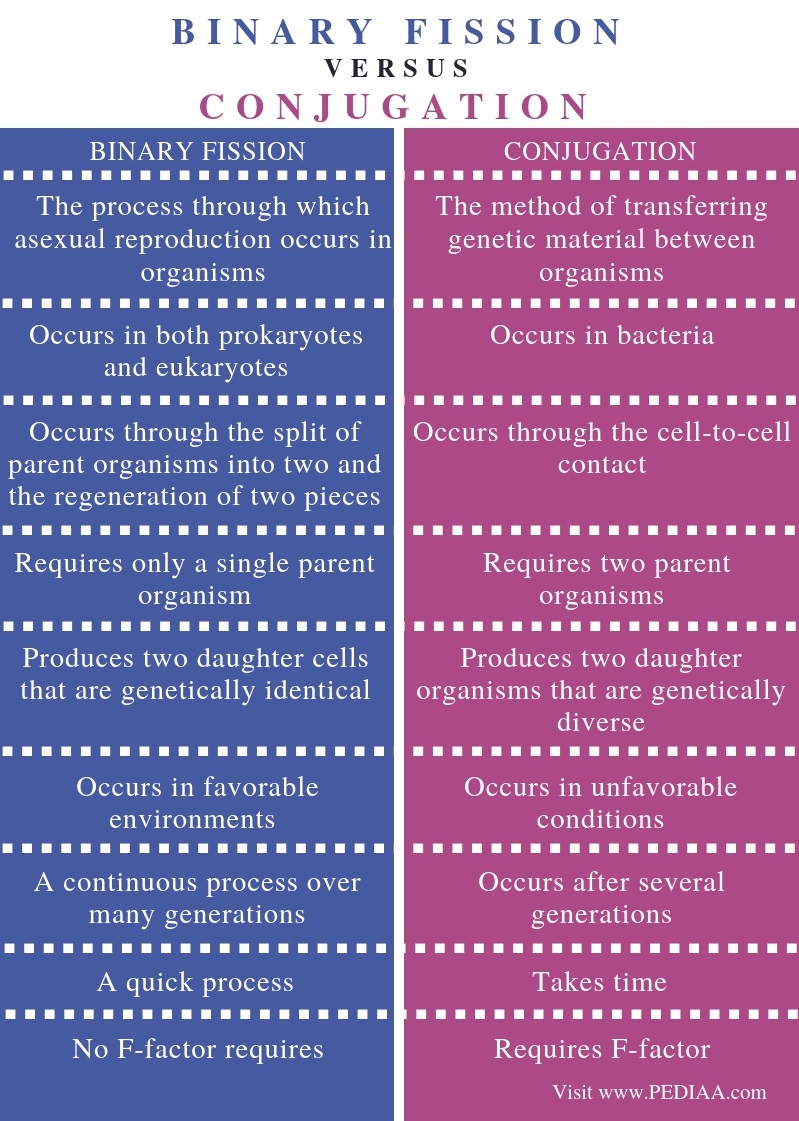 What is Binary Fission

Binary fission is a type of asexual reproduction which occurs in prokaryotes, organelles, as well as unicellular eukaryotes. Prokaryotes such as bacteria an archaea undergo binary fission. In bacteria, a single chromosome undergoes replication followed by the attachment of the two DNA molecules into separate locations in the cytoplasm. In the meanwhile, the parent cell increases its size. Finally, the parent cell splits into two through the formation of the ‘Z-ring’. Furthermore, the two resultant cells have identical genetic material.

Binary fission is the method of reproduction in organelles such as mitochondria and chloroplasts. They also use bacteria-like fission as these organelles are derived from the endosymbiosis of bacteria. In contrast, binary fission in unicellular eukaryotes occurs in four methods. They are:

Conjugation is one of the methods of horizontal gene transfer, mainly in bacteria. However, transduction and transformation are the other methods of horizontal gene transfer in bacteria. Generally, conjugation occurs through the direct contact of two bacterial cells through a pilus. Here, genes for the antibiotic resistance, xenobiotic tolerance, etc. are transferred from one to the second bacterium. Therefore, this transformation of genes is beneficial to the recipient bacterium. 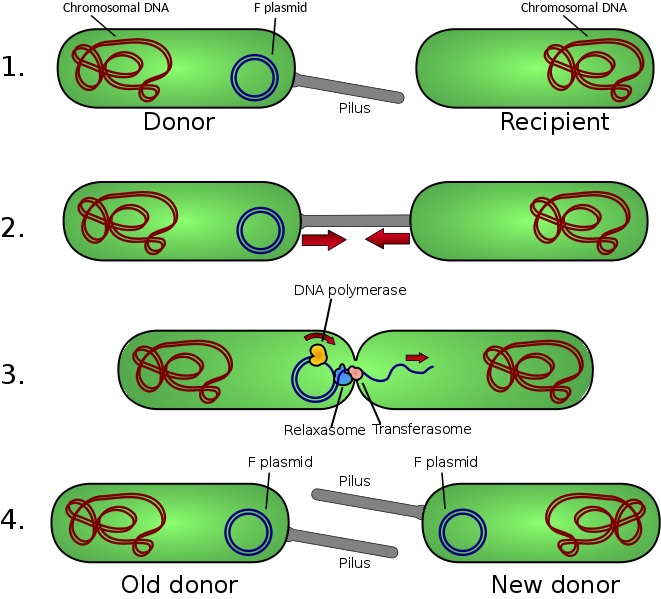 Similarities Between Binary Fission and Conjugation

Difference Between Binary Fission and Conjugation

Binary fission is a continuous process over many generations, while conjugation occurs after several generations.

While binary fission is a quick process, conjugation takes time.

No F-factor is required for binary fission while conjugation requires F-factor.

Binary fission is a type of asexual reproduction used by both eukaryotes and prokaryotes. It is also responsible for the production of two genetically identical daughter organisms by splitting the parent organism into two. In contrast, conjugation is a type of horizontal gene transfer in prokaryotes. Generally, it occurs through the formation of cell-to-cell contact through a pilus. However, it is not a type of sexual reproduction. Therefore, the main difference between binary fission and conjugation is the method of transferring genetic material.