Cestodes and nematodes are two types of parasitic worms or helminths in the intestine. Generally, both types are endoparasites.

Cestodes or tapeworms are a class of parasitic worms that belong to the class Cestoda under the phylum Platyhelminthes. Generally, they have a flat, ribbon-like body with a single anterior holdfast organ called scolex and numerous segments called proglottids. Also, they do not have a digestive system, and therefore, they directly absorb nutrients through the tegument, which is the neodermal cuticle. In addition to these, gas exchange takes place through the tegument. 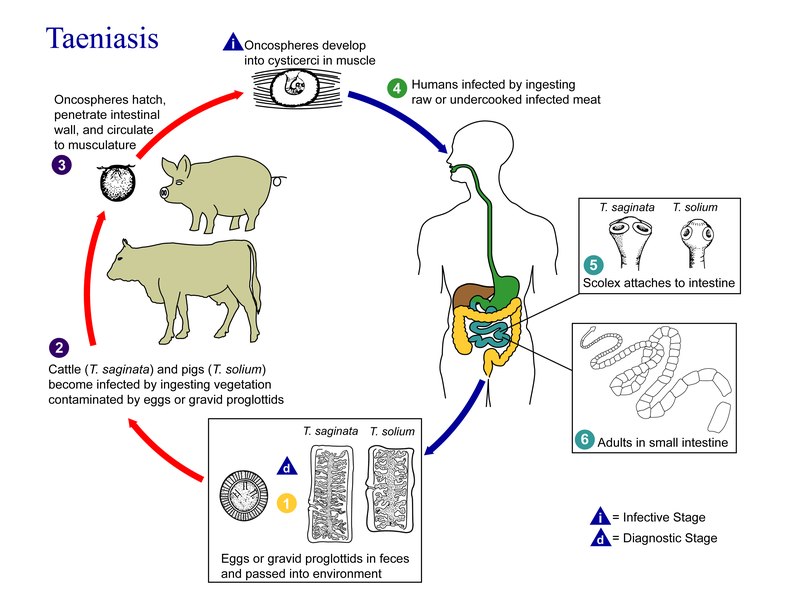 Furthermore, cestodes are acoelomates without a body cavity. Significantly, their flat body facilitates the perfusion of all tissues. On the other hand, cestodes are hermaphrodites; each segment of the body contain both male and female sex organs. Some of the examples of cestodes include Taenia solium (pig tapeworm), Taenia saginata (beef tapeworm), Diphyllobothrium latum (fish tapeworm), and Echinococcus granulosus (dog tapeworm).

Nematodes or roundworms are a diverse group of worms that belong to the phylum Nematoda. Generally, they live freely in freshwater, saltwater, and soil while others are parasitic in animals, including vertebrates and plants. For instance, nematodes have a long thin unsegmented tube-like body. Also, they are pseudocoelomates with a fluid-filled body cavity, acting as a hydrostatic skeleton providing rigidity. 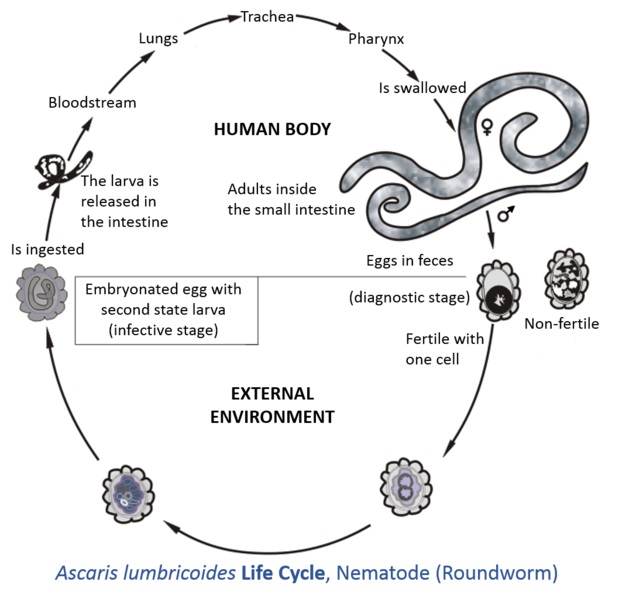 Moreover, nematodes have an anterior mouth and a longitudinal digestive tract. Significantly, in the head, they have lips, teeth, filariform extremities, and dentary plates for both attachment and sucking liquids from walls of the digestive system of the host. In the meanwhile, their digestive system lacks a stomach. On the other hand, the body of nematodes is covered by a thick, collagenous cuticle. Basically, some of the examples of parasitic roundworms are ascarids (Ascaris), filarias, hookworms, pinworms (Enterobius), and whipworms (Trichuris trichiura).

Similarities Between Cestodes and Nematodes

Difference Between Cestodes and Nematodes

Cestodes refer to a class of parasitic worms that are ribbon-like, multisegmented and dwell as adults entirely in the human small intestine while nematodes refer to another class of worms with elongates, a cylindrical body and either free-living or parasitic in animals and plants.

Cestodes have a long, ribbon-like, dorsoventrally flattened body while nematodes have a cylindrical body tapered at each end.

Cestodes have a neodermal cuticle called tegument while nematodes have a thick, collagenous cuticle.

Cestodes have the scolex, is typically a four-sided knob, armed with suckers or hooks or both while nematodes have either three or six lips, which often bear a series of teeth on their inner edges.

Mouthparts of cestodes help to attach to the intestine of the definitive host while the mouthparts of nematodes are responsible for sucking liquids.

Weight loss, tiredness, diarrhea, and vomiting are the symptoms of tapeworm infection while nematodes cause infections in the lungs.

Cestodes segments can be identified in the feces while nematodes can be revealed by the fecal flotation exam.

Cestodes are the tapeworms with a dorsoventrally flat body. Therefore, they belong to the phylum Platyhelminthes. Significantly, cestodes do not have a digestive system, but, they directly absorb nutrients from the intestine of the host. In contrast, nematodes are roundworms of the phylum Nematoda. Generally, they have a cylindrical body. However, most of the nematodes are free-living while some are parasitic. Usually, those parasitic nematodes have sucking mouthparts to absorb food from the host. Also, they have a digestive system with two ends. Therefore, the main difference between cestodes and nematodes is their anatomy and type of parasitism.