Home » General » What is the Difference Between Crampons and Microspikes

The main difference between crampons and microspikes is that crampons are ideal for extreme ice and snow, while microspikes are better when you are dealing with a small amount of snow and ice. 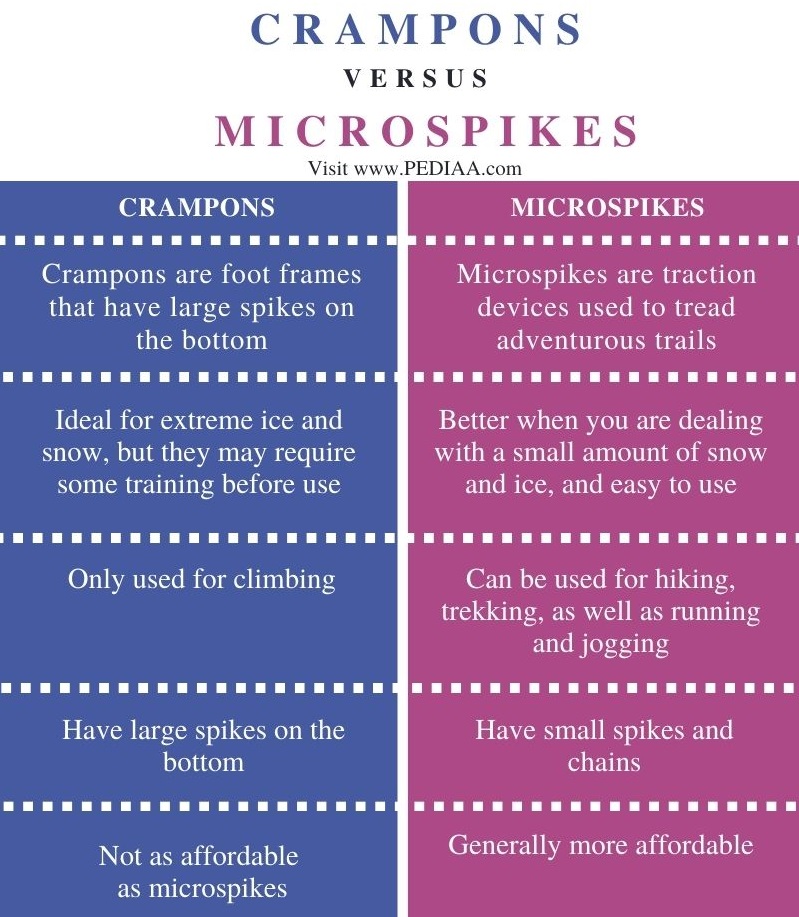 Crampons are foot frames that have large spikes on the bottom. We can simply describe them as pointer versions of snowshoes and skies. This pointy design allows them to dig into ice and snow. A crampon typically has 10-12 points. However, some ice-climbing crampons may contain up to 14 points. In general, 10 points face downwards and, in crampons with 12 points, 2 points stick out the front. Having front points helps in climbing steeper ground.

Traditionally, crampons were designed for ice-climbing. They are attached to the footwear and help the wearer to improve grip while travelling in risky terrains of ice and snow, like snow slopes, ice fields, and glaciers. Hikers, climbers, and backpackers use crampons.

Crampons are usually made of two materials: steel and aluminum. Steel crampons are a good option if you are going on general technical mountaineering in steep and icy terrain. Aluminum crampons, on the other hand, are lightweight and are perfect for alpine climbs. But they will wear out quickly if you use them on rocky terrain.

Microspikes are traction devices we use to tread adventurous trails. We wear them over trekking footwear for extra traction. They are ideal for hiking trails covered in snow or ice. Microspikes have small spikes and chains. They are designed with a concept similar to that using chains over tires to improve vehicle traction.

Microspikes usually have heat-treated stainless steel spikes and welded stainless steel chains. The spikes are resistant to corrosion, durable, and dig into the icy terrain aggressively, while the chains provide extra traction in the snow while being exceptionally flexible.

Furthermore, microspikes usually tend to be more affordable and fit with non-boot footwear, like trail running shoes. You can even enjoy a jog or run in microspikes. They are also safe to use when the trail is muddy or rocky.

Difference Between Crampons and Microspikes

Crampons are foot frames that have large spikes on the bottom, while microspikes are traction devices used to tread adventurous trails.

Crampons are ideal for extreme ice and snow, while microspikes are better when you are dealing with a small amount of snow and ice. Moreover, microspikes are easy to use, whereas crampons may require some training.

Crampons are only used for climbing. However, you can use microspikes for hiking, trekking, as well as running and jogging.

While crampons have large spikes on the bottom, microspikes have small spikes and chains.