The main difference between E Coli and salmonella is that E. coli is a type of commensal bacteria that commonly lives in the lower intestine of warm-blooded animals whereas Salmonella is a facultative, intracellular pathogen in both warm-blooded and cold-blooded animals. Although most E. coli strains are harmless, some can cause serious food poisoning through food contamination. Salmonella, on the other hand, can cause typhoid fever, and paratyphoid fever through food-borne infection.

E. coli and Salmonella are Gram-negative bacteria of the family Enterobacteriaceae. Generally, they are rod-shaped, non-spore-forming, facultative anaerobes. Their pathogenic species use the faecal-oral contamination route for spreading. 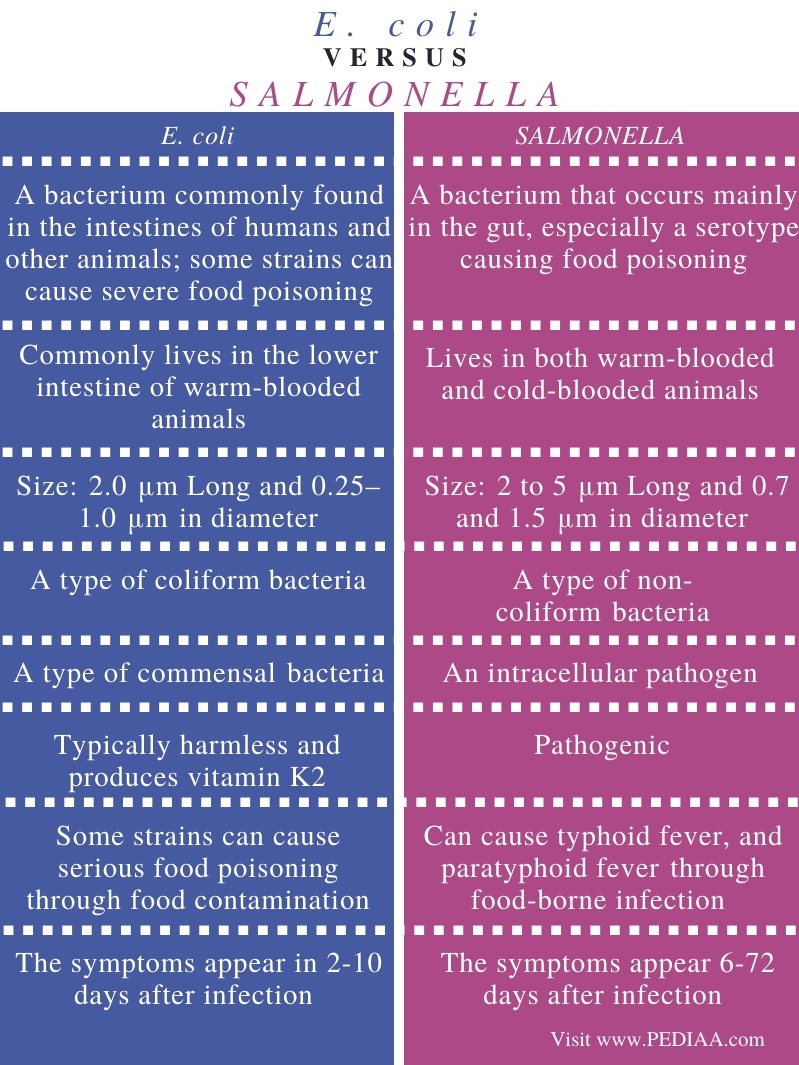 What is E. coli

E. coli (Escherichia coli) is a Gram-negative bacterium of the family Enterobacteriaceae. Therefore, it is a rod-shaped bacterium that is a facultative anaerobe. Thus, E. coli can switch between aerobic respiration and fermentation according to the presence and absence of oxygen. It is also a type of coliform bacteria. The two main characteristic features of a coliform bacterium include living in the intestine as an ecological resident and the ability to ferment lactic acid, producing gas. 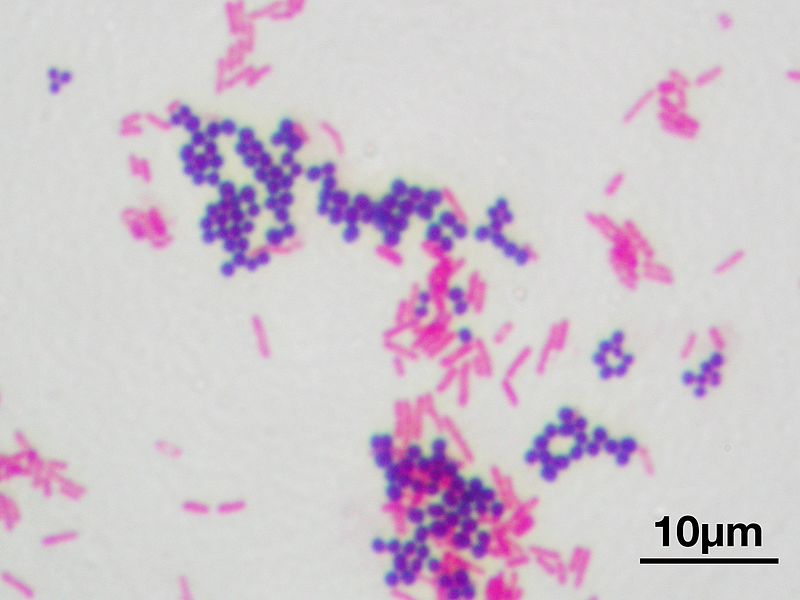 Furthermore, E. coli is a commensal that produces beneficial effects such as the production of vitamin K2. It also prevents the colonization of the pathogenic bacteria in the intestine. It is a harmless, normal part of the microbiota of the gut. E. coli is expelled into the environment along with the faecal matter. In rare cases, food contamination can allow some serotypes of E. coli to cause serious food poisoning.

Salmonella is a pathogenic bacterium in the family Enterobacteriaceae. It is a rod-shaped, Gram-negative bacterium and a facultative anaerobe. Along with E. coli, Salmonella is a type of campylobacteria that occurs in the gut of the infected individuals. In addition to these, the common symptoms of campylobacter bacteria infections include diarrhoea, stomach pain or cramps, flu-like symptoms, nausea, and vomiting. Generally, campylobacter bacteria appear in 1-10 days of infection, and the symptoms last for less than 10 days. 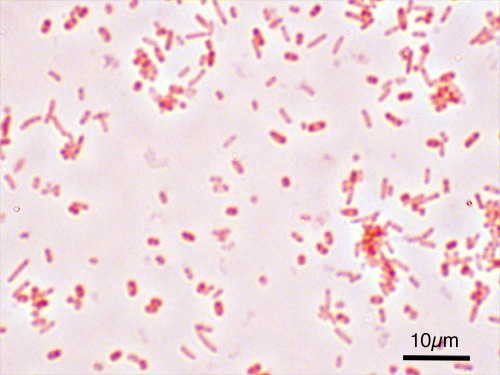 Moreover, there are two species of Salmonella. They are Salmonella enterica and Salmonella bongori. The former infects warm-blooded animals while the latter infects cold-blooded animals, particularly reptiles. Moreover, nontyphoidal Salmonella can be invasive and cause paratyphoid fever, which requires immediate treatment with antibiotics. In contrast, typhoid subtypes of Salmonella cause typhoid and paratyphoid fever. Most importantly, typhoid fever can generate life-threatening conditions such as hypovolemic shock and septic shock as the typhoid form invades the bloodstream and the septic form invades organs and secretes endotoxins.

Similarities Between E. coli and Salmonella

Difference Between E. coli and Salmonella

Type of the Host

E. coli is a type of commensal bacteria, while Salmonella is an intracellular pathogen.

Effect on the Host

While E. coli is typically harmless and produces vitamin K2, Salmonella is pathogenic.

E. coli is a type of Gram-negative, rod-shaped bacteria that live in the intestine of animals. Therefore, it is a facultative anaerobe and produces vitamin K2. It is a commensal, usually harmless to the host. However, some strains can cause food poisoning. Salmonella is also a type of Gram-negative, rod-shaped bacteria that belong to the same family. However, it is an intracellular pathogen that causes typhoid and paratyphoid fever. Hence, the main difference E Coli and Salmonella is their mode of living.