Generally, we use both examples and samples to support evidence and show the qualities of a specific group. Although their function is quite similar to each other, there is a clear-cut difference between example and sample. 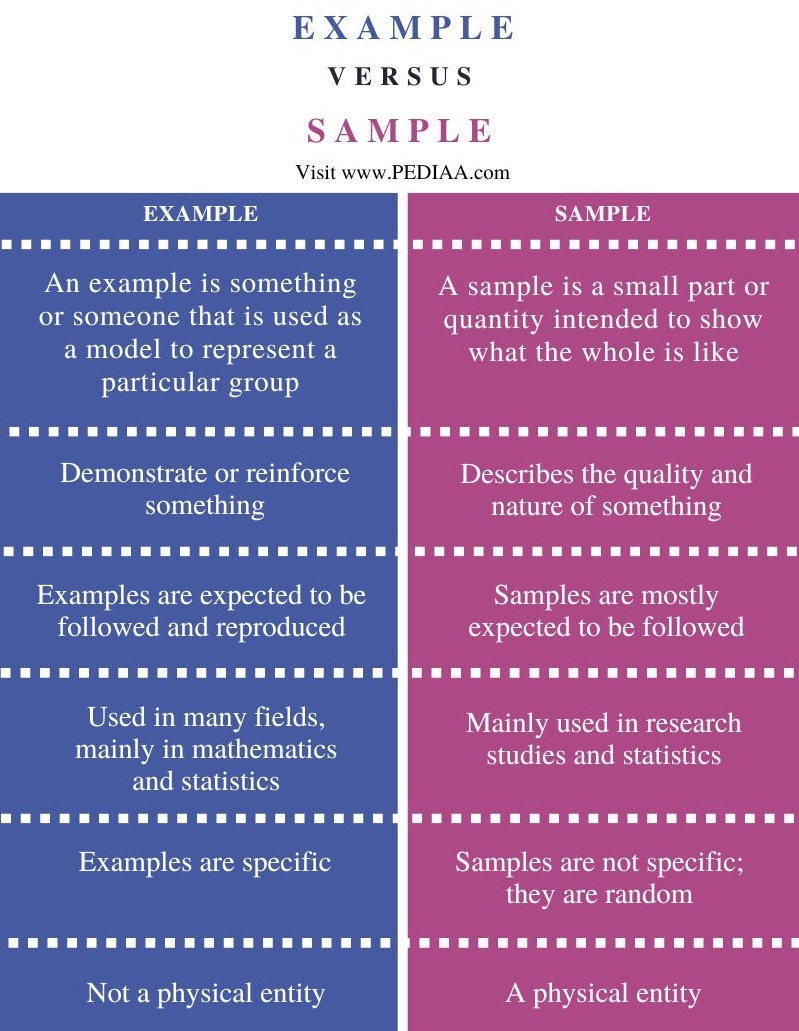 What is an Example

An example is something or someone that is used as a model to represent a particular group. An example is used to show one out of the number of things or to show part of something. In addition, an example shows a particular class of objects or styles having many typical features of such a class or style. We use examples to illustrate or reinforce facts. We also use examples to give evidence and support the facts presented in an essay or a speech.

There are different forms of presenting examples. One of them is citing a particular incident; the other one includes illustrations. The use of these forms will be different according to the usage. The examples that are used in a particular instance are specific, and they are almost identical to the thing they represent. At the same time, examples are used in situations where a demonstrative part cannot be recreated or reconstructed in a given situation. We mostly use examples in subject areas like mathematics and statistics.

What is a Sample

We use the word sample to refer to a model or specimen. It refers to a small piece or part of something that shows what the whole looks like. Basically, we use samples to describe the qualities of things as a whole. Furthermore, researchers use samples in quantitative research studies to describe the part of a target population. We also use samples in statistics. Generally, a sample is not specific, and it is random.

Samples used in research studies can be observed using the five senses: sight, touch, taste, smell, and hearing. We also use samples in a scientific context, for example in laboratories. Since a sample provides a model, users have the opportunity to follow the model and get the work done. A sample is considered a physical entity, and a sample is also a small piece or part out of a big amount.

Similarity Between Example and Sample

Differences Between Example and Sample

An example is something or someone that is used as a model to represent a particular group, whereas a sample is a small part or quantity intended to show what the whole is like.

Although the purpose of an example is to illustrate or reinforce something, a sample describes the quality and nature of something.

Examples are used in many fields, whereas samples are mainly used in research studies and statistics.

The main difference between example and sample is their purpose; examples demonstrate and reinforce facts while samples  describe quality or nature of something.