Home » Science » Biology » What is the Difference Between Hyperplasia and Neoplasia

Hyperplasia and neoplasia are two abnormal processes which result in an increase in tissue size. Generally, the term “-plasia” refers to cancerous or pre-cancerous cells. 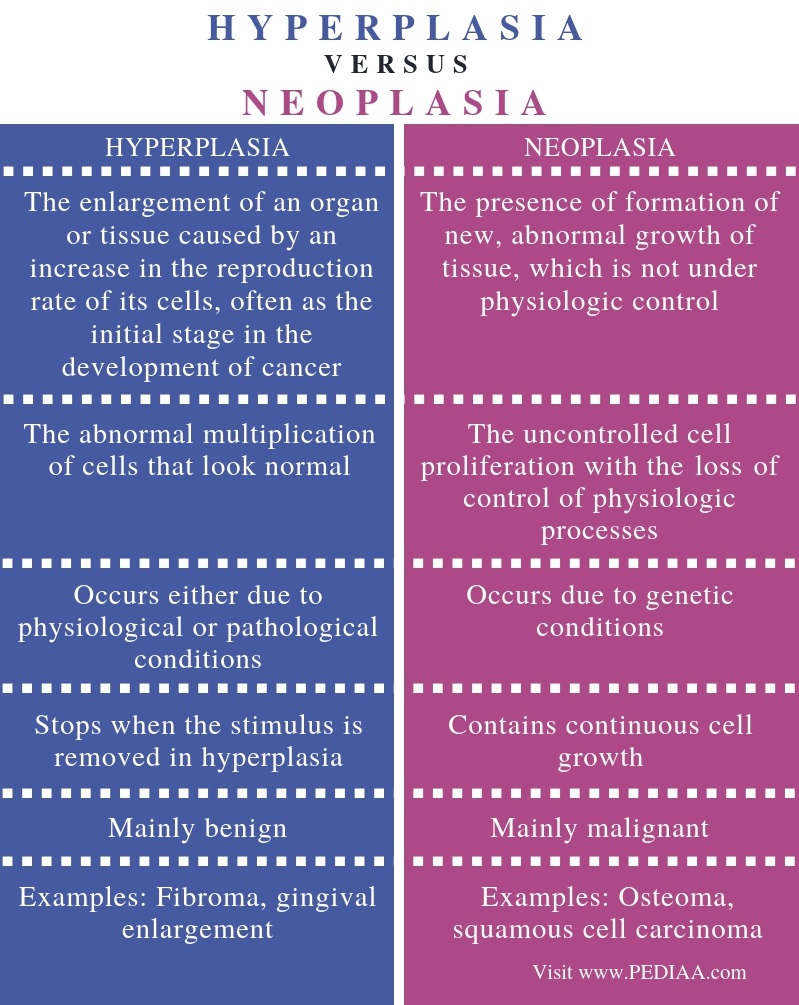 Hyperplasia is the abnormal increase in cell number due to constantly dividing cells in a tissue. Although these cells are normal in morphology and physiology, they result in organ enlargement or tumor formation, which is benign. Generally, due to the proliferation of cells in a physiological manner, hyperplasia is reversible with the removal of the stimulus. Furthermore, some causes of hyperplasia include increased stress, hormonal dysfunctions, chronic inflammatory response, compensation for damage or disease elsewhere. 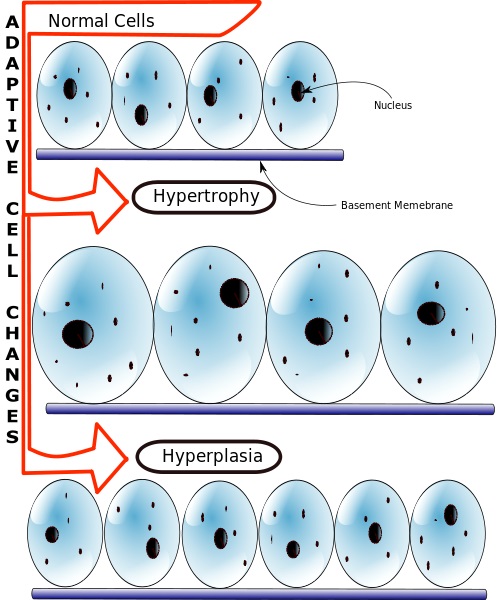 Sometimes, hyperplasia can be completely a natural process, which is harmless; for example, multiplication of milk-secreting glandular cells in the breast. However, hyperplasia may also cause medical problems, which are mainly non-cancerous. For instance, an infant that consumes too much sugar in its first year of life can develop hyperplasia in adipocytes. Later, it has a higher risk for hyperplastic obesity with a normal quantity of adipocytes, but each of those fat cells is abnormally large in size.

Neoplasia is the abnormal increase in the number of cell with physiologic changes. Generally, genetic changes cause neoplasia. Therefore, this results in uncontrollable cell proliferation, which may lead to cancer. Neoplasm is a cancer-causing tumor. Moreover, the neoplastic epithelium is called carcinoma. However, when a neoplasm has started, it is not reversible. 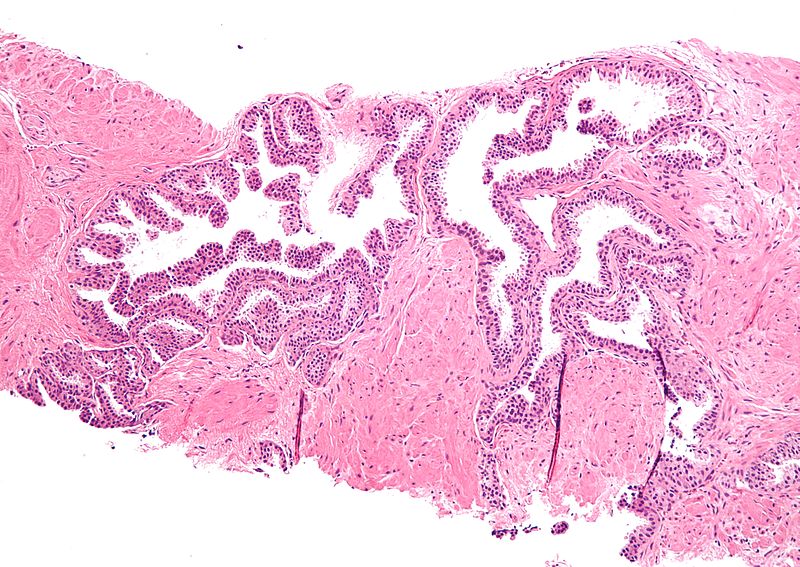 The term ‘tumor‘ is often used synonymously with neoplasm. However, the tumor also refers to other uncontrolled cell growths with a physiological or pathological origin. All neoplasms are not cancerous as melanocytic nevi (skin moles), uterine fibroids, etc. are benign.

Similarities Between Hyperplasia and Neoplasia

Difference Between Hyperplasia and Neoplasia

Hyperplasia refers to the enlargement of an organ or tissue caused by an increase in the reproduction rate of its cells, often as the initial stage in the development of cancer while neoplasia refers to the presence of formation of new, abnormal growth of tissue, which is not under physiologic control.

Hyperplasia is the abnormal multiplication of cells that look normal while neoplasia is the uncontrolled cell proliferation with the loss of control of physiologic processes. Thus, this is the basic difference between hyperplasia and neoplasia.

Hyperplasia is an abnormal growth of tissue in size due to the increased proliferation of cells. However, these cells are normal and increase proliferation either due to physiological or pathological conditions. Therefore, when the stimulus is stopped, the abnormal growth is reversible. On the other hand, neoplasia is another type of abnormal cell growth of tissue due to the increase in cell number. However, it occurs due to genetic changes. Therefore, proliferating cells are abnormal and have physiologic changes. Moreover, abnormal proliferation is not reversible with the removal of the stimulus. Hyperplasia is normally benign while neoplasia is normally malignant. Therefore, the main difference between hyperplasia and neoplasia is the type of cell growth.