The main difference between IgG IgM IgA IgE and IgD is their structure and function. IgG has the highest opsonization and neutralization activities; IgM is the first antibody transiently increased upon antigen invasion; IgA is expressed in mucosal tissues; IgE is involved in allergy whereas IgD functions as an antigen receptor on activated B cells. Furthermore, IgG, IgE, and IgD remain as monomer antigens, IgA remains either as a dimer or trimer while IgM remains as a pentamer. Moreover, IgA has two subclasses while IgG has four subclasses.

IgG, IgM, IgA, IgE, and IgD are the five classes of immunoglobulins in placental mammals. They are also known as antibody isotypes. 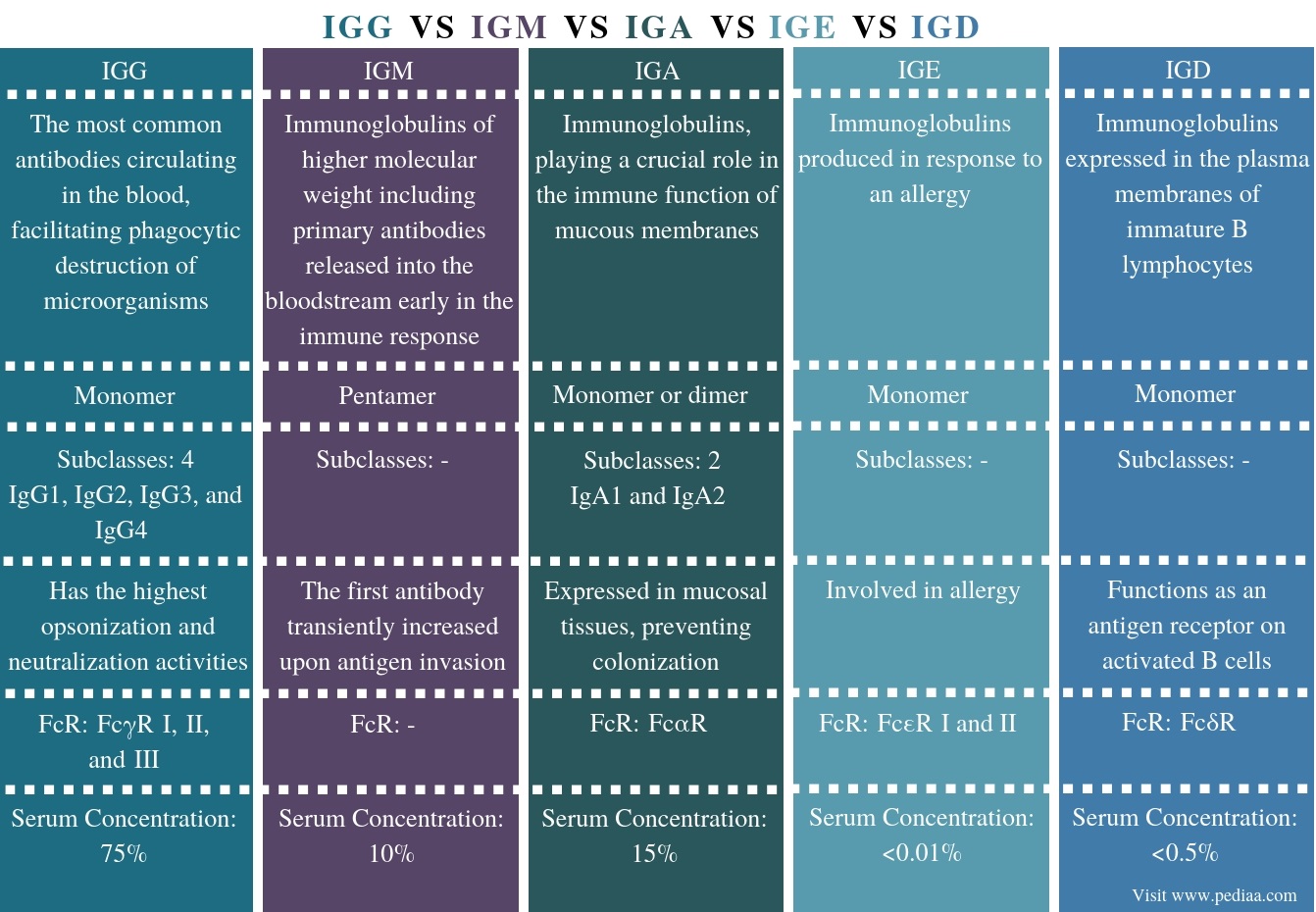 IgG is the predominant form of immunoglobulins (75% in the serum) with the longest serum half-life. Generally, the main function of IgG is to provide the main humoral immune response against pathogens that invade the body. It also plays a key role in the secondary immune response. 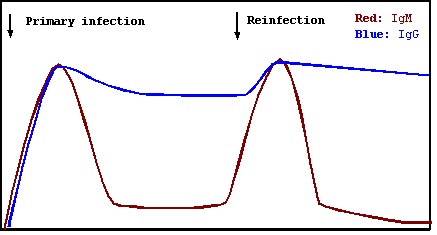 Usually, the binding of IgG to pathogens causes immobilization and agglutination of pathogens through opsonization. Also, it activates the classical pathway of the complement system while neutralizing toxins. In addition, IgG plays a critical role in antibody-dependent cell-mediated cytotoxicity.  IgG is the only form of antibody that is capable of crossing the placenta in order to provide passive immunity to the fetus. IgG has four subclasses. They are IgG1, IgG2, IgG3, and IgG4.

IgM is the first form of immunoglobulins expressed during the development of B cells in the primary immune response. Moreover, it is the largest form of antibody and occurs as a pentamer. Generally, IgM binds to the complement component C1, activating the classical pathway which leads to opsonization. 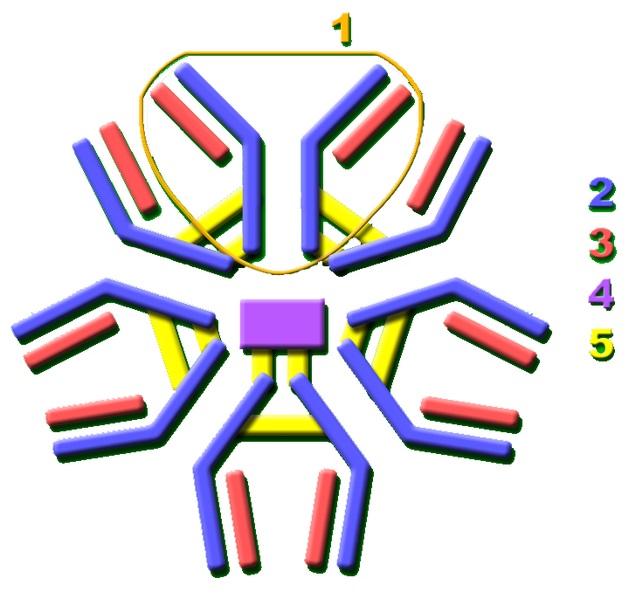 However, due to the larger size, IgM tends to stay inside blood vessels. Also, it has a lower affinity towards antigens in comparison to IgG. However, IgM has 10 antigen-binding sites due to its pentameric structure. Therefore, its avidity or the overall binding strength is higher than that of the IgG.

IgA is the form of immunoglobulins which functions in the mucous membranes. Generally, it occurs in mucous secretions including tears, sweat, saliva, colostrum, and the secretions of the gastrointestinal, respiratory, and genitourinary tracts. It accounts for 15% of the serum antibodies. In addition, IgA occurs either in monomeric or dimeric forms. 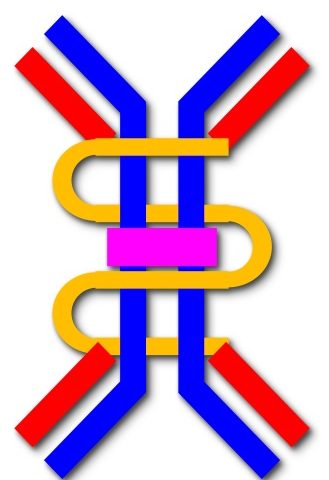 Generally, the dimeric form of IgA is the most prominent and it is a form of secretory IgA. Furthermore, IgA initiates inflammatory responses by interacting with immune effector cells. The two forms of IgA are IgA1 and IgA2 while IgA1 is the predominant form in the serum.

IgE is the form of immunoglobulin with the lowest serum concentration as well as the shortest half-life in the serum. However, it is a very potent antibody associated with allergic reactions and hypersensitivity. It also responds to parasitic worm infections.

Generally, IgE has a higher affinity towards the FcεRI receptor on mast cells, eosinophils, basophils, and Langerhans cells. Therefore, the binding of IgE to allergens triggers the release of histamine from mast cells and basophils, involving in allergy.

IgD is another type of immunoglobulins with lower serum concentration. It has a shorter half-life in the serum due to the presence of a hinge region, which undergoes proteolysis. Generally, the main function of IgD is to serve as an antigen receptor on naive B cells. 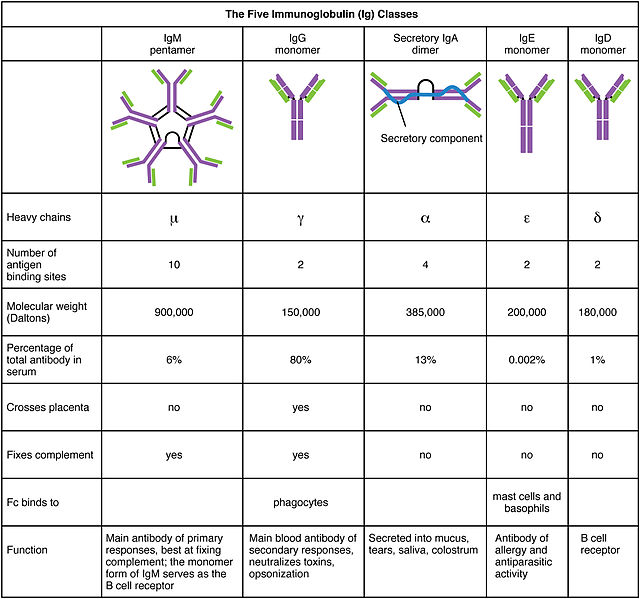 Although its function is unknown, IgD activates mast cells and basophils to produce antimicrobial factors.

IgG, IgE, and IgD remain as monomer antigens, and IgA remains either as a monomer or dimer while IgM remains as a pentamer.

IgA has two subclasses and IgG has four subclasses while the rest of the antibodies have a single class.

Moreover, IgG has the highest opsonization and neutralization activities, IgM is the first antibody transiently increased upon antigen invasion, IgA is expressed in mucosal tissues, preventing colonization, IgE is involved in allergy while IgD functions as an antigen receptor on activated B cells.

IgG is a monomer responsible for the destruction of pathogens through phagocytosis. On the other hand, IgM is the heaviest immunoglobulin type, occurring as pentamers. Also, they are the primary antibodies produced in response to an immune response. IgA is either monomer, dimer or trimer, occurring in mucous membranes. However, IgE is a monomer produced in response to an allergy. Moreover, IgD is also a monomer, functioning as an antigen receptor on activated B cells. Therefore, the main difference between IgG, IgM, IgA, IgE, and IgD is their structure and function.