Basically, in western blot, proteins undergo denaturation and size separation by gel electrophoresis. Subsequently, the separated protein bands are transferred to a carrier membrane such as nitrocellulose or PVDF in a process known as blotting. Ultimately, antibodies conjugated with fluorescent, radioactive labels or reporter enzymes take part in the recognition of specific proteins on the membrane.

Immunoblot is the most often used technique in molecular biology as well as immunogenetics to detect specific proteins in a sample. Generally, this technique is more specifically named as ‘immunoblot’ due to the usage of anti for the detection of proteins. 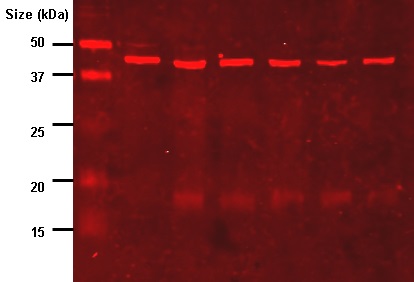 Moreover, the laboratory of Harry Towbin at the Friedrich Miescher Institute in Basel, Switzerland developed the method. Here, the principles of immunoblot include equal loading of proteins, separation of proteins by molecular weight, electrophoretic transfer of proteins to a suitable membrane, and probing of antibodies.

Usually, it is important to have an equal concentration of proteins per each sample in the immunoblot. Basically, the three components of each sample are the protein extract, cell lysis buffer, and sample buffer. Here, cell lysis buffer is important for the normalization of the protein extract to the desired protein concentration. Further, sample buffer or Laemmli buffer is unique for immunoblot sample preparation. It contains reagents, which play a function in SDS-PAGE. Also, it contains Tris-HCl pH 6.80 glycerol, SDS, beta-mercaptoethanol, and bromophenol blue.

The Tris-HCl pH 6.80 works in conjugation with the discontinuous buffer system. Also, glycerol adds density to the sample while loading. In addition to these, SDS is a potent ionic detergent, coating denatured proteins with an equal anion to mass ratio. Thus, this masks the charge, size, and shape of the protein, allowing the separation of proteins as a function of its molecular weight. Meanwhile, the beta-mercaptoethanol reduces the disulfide bonds, which retain the shape of the protein to a certain extent. Further, the bromophenol blue serves as the dye front during gel electrophoresis.

Separation of Proteins By Molecular Weight

Normally, multiple methods of blotting involve in the electrophoretic transfer of proteins on to different membranes. However, their principle is similar, which is the migration of the negatively-charged samples towards the anode.

In this process, nitrocellulose was the gold-standard as the membrane until the advent of PVDF membranes. Importantly, these membranes have a higher protein binding capacity with respect to the former.

Ultimately, two types of antibodies take part in the probing and analysis. They are primary and secondary antibodies. Now, proteins are on the membrane. Therefore, primary antibodies directly bind to the specific regions of proteins on the membrane. Meanwhile, the secondary antibodies indirectly bind to specific proteins by means of primary antibodies. Importantly, blocking is the procedure, which coats the remaining surface area on the membrane prior to antibody probing. Thus, this reduces the background, eliminating false positives. Also, the blocking buffer contains either casein or bovine serum albumin (BSA); all have a low affinity towards the sample proteins. Besides, washing steps after the incubation of the membrane with each of the two antibody types is also important for the reduction of background.

Moreover, secondary antibodies typically conjugate with a component-specific for the analysis. Here, this component can be either a radioactive isotope, fluorophore or more commonly a reporter enzyme such as horseradish peroxidase (HRP) or alkaline phosphatase (AP). Importantly, the use of enzymes in the analysis in the chemiluminescence method permits the detection of the bound antibodies on the membrane through colorimetric analysis.

Finally, the visualization of bands on the membrane verifies the presence of the specific proteins to the used primary antibodies.

Typically, in biochemistry, immunoblot is extensively important for the qualitative detection of a single protein or a protein modification. Also, the size and the color intensity of the band provide a semi-qualitative analysis. Therefore, immunoblot is important in the verification of protein production after cloning.

What is Western Blot

‘Western blot’ is another name for immunoblot, which detects specific proteins in a sample. However, the term ‘western blot’ was coined by W. Neal Burnette in 1981 after the eponymous southern blot for DNA. Meanwhile, the Southern blot was developed by British biologist Edwin Southern to detect specific DNA sequences on a membrane blot. Also, ‘northern blot’ is the technique for the detection of RNA developed in 1977 by James Alwine, David Kemp, and George Stark at Stanford University, with contributions from Gerhard Heinrich.

Difference Between Immunoblot and Western Blot

Immunoblot is the technique in molecular biology to detect specific proteins in the sample with the use of antibodies. Thus, due to the usage of antibodies for the detection purpose, the more correct name for the technique is immunoblot. However, it is also known as ‘western blot’ in order to represent the opposite technique, which is Southern blot, detecting specific DNA sequences in the blot. Concerning the process, immunoblot involves the size separation of denatured proteins on a gel followed by transferring the resultant fragments into a membrane. Finally, labeled antibodies bind to the specific proteins on the membrane. Therefore, based on this account, there is no significant difference between immunoblot and western blot in terms of principle, methodology or applications.