Although both polar and tundra regions refer to the environmental systems with very cold climates, they are different from each other in that polar regions have icy landscapes with no plants or trees while tundra regions may have some plantation on the ground. 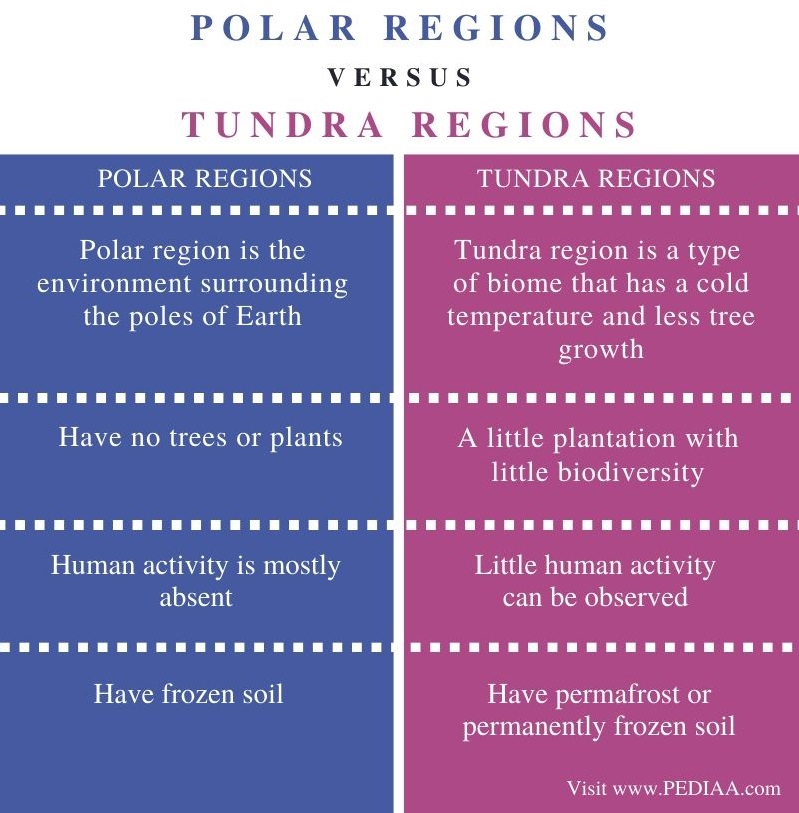 What are Polar Regions

Polar regions receive a considerably less amount of solar radiation. It is because compared to the other regions of Earth, the solar radiation comes towards these regions in an oblique angle and this energy coming from a low level of sunlight spreads through a large area. Also, this sunlight travels comparatively a long distance through the atmosphere, which causes most of the energy coming from the sun to be absorbed by the atmospheric components.

The main characteristics of polar regions are extremely cold temperature, heavy glaciation, extreme variations in daylight hours, etc. For example, in the summertime, these regions get a 24 hour time period of daylight, but in mid-winter times, there is complete darkness. 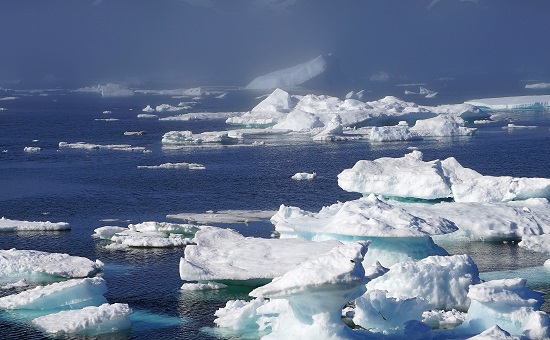 The southern polar region has no human habitation. But there are research stations established by the United States and some other countries. Along the Antarctic coastal regions, there is a complex ecosystem. We can observe some animals that are able to live in extremely cold climates such as penguins, blue whales, krill, etc.

What are Tundra Regions

Tundra regions are a type of biome that has a cold temperature and less tree growth. Trees and other vegetations are hindered by low temperature. The name Tundra has a Russian origin, meaning “uplands with treeless mountain tracts”. The vegetation in tundra include shrubs, sedges, grasses, and mosses. There can also be lichens. In some tundra regions, we can observe some scattered trees as well. Generally, the soil in the tundra region mainly contains nitrogen and phosphorous. There are three major types of tundra regions: Arctic tundra, Alpine tundra, and Antarctic tundra.

Arctic tundra is in Northern hemisphere of Earth, while Antarctic tundra is in the Southern hemisphere. The subsoil in these regions is permafrost, or sometimes it is permanently frozen. These areas have a human habitat. However, tundra regions near the poles have frozen soil that makes it unsuitable for the plant growth. Some rocky land areas support small shrubs like moss, lichen, and heath. Therefore, the biodiversity in these regions is very low. Moreover, these regions are very windy areas and have a little human activity. As a result, there is very low amount of environmental pollution.

Difference Between Polar and Tundra Regions

Polar regions have no trees or plants while a little plantation with little biodiversity can be observed in tundra regions.

Human activity is mostly absent in polar regions while in tundras, one can observe a little human activity

Polar regions have frozen soil while tundras have permafrost or permanently frozen soil.