The main difference between quiche and soufflé is that a quiche is a French savory tart with a rich custard filling blended with ingredients such as onion, cheese, or bacon, while a soufflé is a relatively lightly baked French dish that has a fluffier texture than quiche.

A soufflé usually gets this fluffier texture as a result of beaten egg whites, which we add to the soufflé mixture along with the other ingredients such as egg yolks, white sauce, cheese, fruit juices, chocolate sauce, vanilla cream, etc. Although we can serve soufflés as both sweet and savory dishes, quiche is traditionally a savory dish.

What is a Soufflé

A soufflé is a baked dish that is served both as a sweet dessert blended with berries or chocolate sauce or as a savory dish mixed with vegetables, meat, fish, or cheese. This is a dish with a French origin. In the French language “souffler,” means “to blow.” Whether you are making a sweet soufflé or a savory soufflé, first you have to separate the egg whites and egg yolks. Then you have to beat the egg whites until stiff comes to a head form and forms the airy tops. Then you have to beat the egg yolks and mix them with other ingredients in order to make the soufflé. When we bake the soufflé, air bubbles within the egg whites expand, making the soufflé puff up and mount the dish.

When making a sweet soufflé, we usually mix sugar with egg whites. Most often, we serve sweet soufflés along with a sweet sauce such as berry puree or crème anglaise. Generally, we puncture the soufflé and pour the sauce inside. Another delicious way of serving a hot soufflé is to serve it on the side of a cold item such as ice cream. On the other hand, when it comes to savory soufflés,  we usually add ingredients such as vegetables, fish, or meat blended with creamy cheeses, hot sauces, and spices.

What is a Quiche

Quiche is a savory French tart. We make the pastry crust for quiche tart by incorporating butter, flour, and water. Then we usually fill this pastry crust with a savory egg custard blended with cheese, herbs, veggies, seafood, or meats. Quiche is also popular all around the world as a brunch dish. 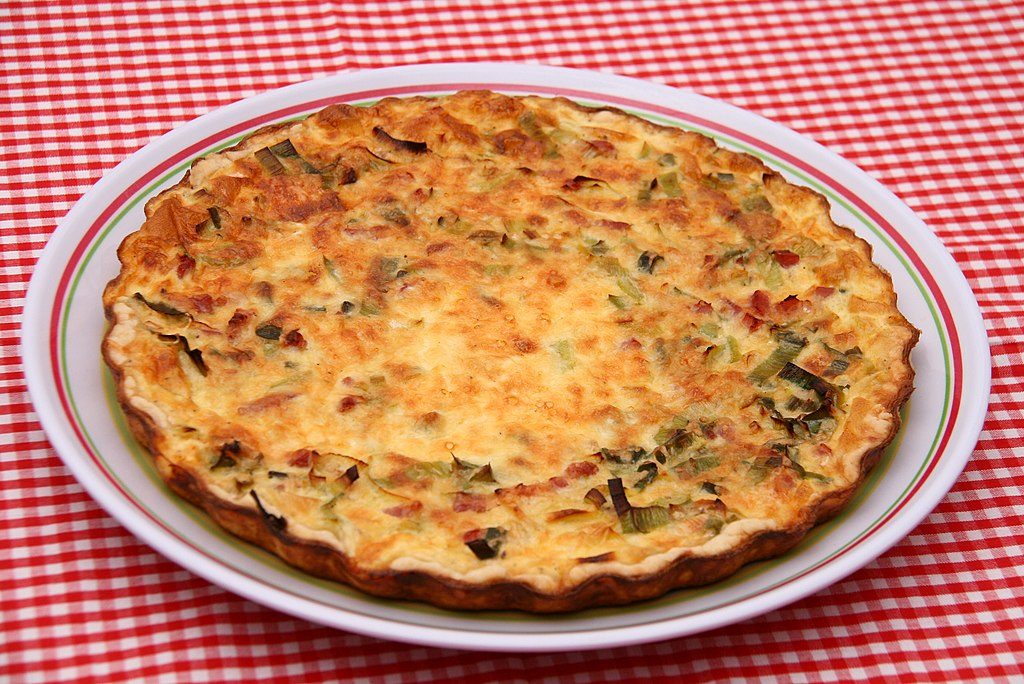 Ham and cheese quiches are some of the most popular quiche versions available in restaurants. A quiche usually comes with a rich crust. However,  when comparing with soufflé, it is less eggy. Quiche is a dish that is totally oven-baked. There are many variations of quiche dishes. Some of the commonly available types include quiche Lorraine, spinach quiche, broccoli or asparagus quiche, and mushroom quiche.

Similarities Between Quiche and Soufflé

Difference Between Quiche and Soufflé

A quiche is a French savory tart with a rich custard filling blended with ingredients such as onion, cheese, or bacon, while a soufflé is a  relatively light-baked French sweet or savory dish that has a fluffier texture than quiche.

Soufflé has a  fluffier texture than quiche.

A quiche comes with a savory pastry crust, but a soufflé doesn’t have any crust.

Both soufflés and quiches are usually baked at similar temperatures. However, when we are making a quiche, we have to pre-bake its pie crust. Therefore, the cooking time of a quiche dish is comparatively longer.

The main difference between quiche and soufflé is that a quiche is a French savory tart with a rich custard filling blended with ingredients such as onion, cheese, or bacon, while a soufflé is a relatively lightly baked French dish that has a fluffier texture than quiche.