Sinusoids and capillaries are the smallest types of blood vessels in the vascular system. Generally, their main function is to facilitate the interchange of nutrients and wastes between blood and organs. 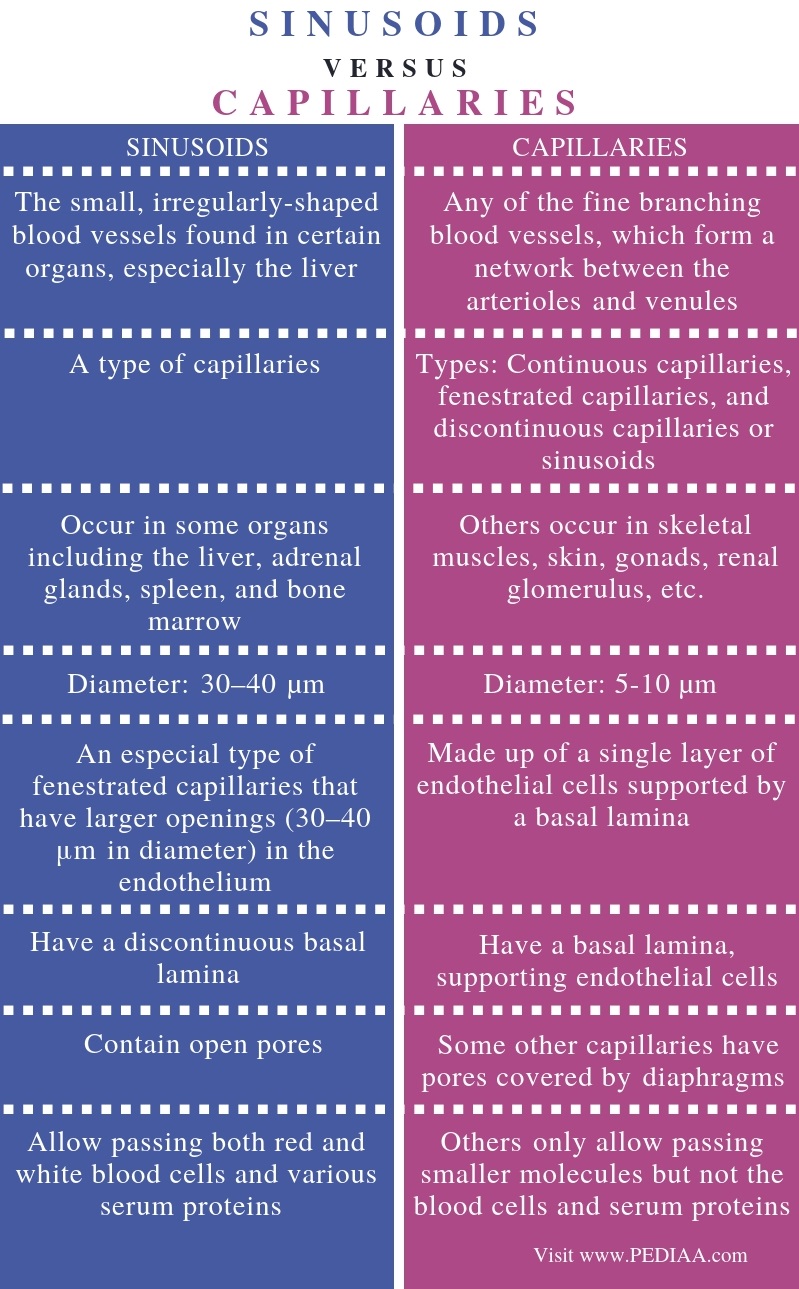 Furthermore, the large pores of the sinusoids allow passing blood cells, including red and white blood cells out of the blood. Moreover, they allow escaping serum proteins from the blood. In the liver, sinusoids serve as a location for mixing oxygen-rich blood from the hepatic artery and nutrient-rich blood from the portal vein. Also, Kupffer cells that line the sinusoids in the liver plays a vital function in immunity. 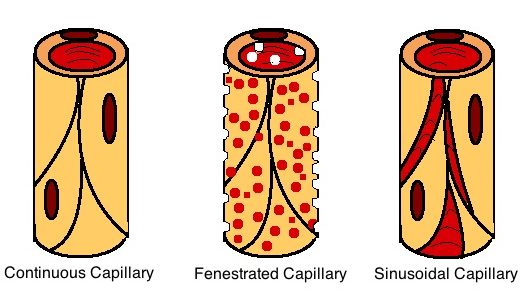 Similarities Between Sinusoids and Capillaries

Difference Between Sinusoids and Capillaries

Sinusoids refer to the small, irregularly-shaped blood vessels found in certain organs, especially the liver, while capillaries refer to any of the fine branching blood vessels, which form a network between the arterioles and venules. Thus, this is the main difference between sinusoids and capillaries.

Sinusoids occur in some organs, including the liver, adrenal glands, spleen, and bone marrow, while other capillaries occur in skeletal muscles, skin, gonads, renal glomerulus, etc.

Furthermore, sinusoids are an especial type of fenestrated capillaries that have larger openings (30–40 μm in diameter) in the endothelium, while capillaries made up of a single layer of endothelial cells supported by a basal lamina.

Besides, sinusoids contain open pores while some other capillaries have pores covered by diaphragms.

In brief, sinusoids are an especial type of blood capillaries characterized by the presence of a discontinuous basal lamina and large, open-pores between endothelial cells. Moreover, they mainly occur in the liver, spleen, and bone marrow. Due to their structure, they allow passing blood vessels and serum proteins out of the circular system. On the other hand, capillaries are the smallest blood vessels in the vascular system. Apart from sinusoids, the other two types of capillaries are continuous capillaries and fenestrated capillaries. Basically, continuous capillaries occur in many tissues, including skeletal muscles, and other organs while fenestrated capillaries occur in the renal glomerulus. However, they only allow passing small molecules out of the plasma. Therefore, the main difference between sinusoids is the occurrence, structure, and function.

1. “Hepatic structure2” By Originally by Frevert U, Engelmann S, Zougbédé S, Stange J, Ng B, et al. Converted to SVG by Viacheslav Vtyurin who was hired to do so – Based on the research article “Intravital Observation of Plasmodium berghei Sporozoite Infection of the Liver”, PLoS Biology, doi:10.1371/journal.pbio.0030192.g011 (CC BY 2.5) via Commons Wikimedia
2. “Different Types of Capillaries” By Elizabeth2424 – Own work (CC BY-SA 3.0) via Commons Wikimedia