The main difference between siRNA and shRNA is that siRNA is a form of short, dsRNA with 2 nucleotides as 3’ end overhangs that activate RNA interference (RNAi) whereas shRNA contains a loop structure that is processed to siRNA. Furthermore, siRNA is transient by means of the effect per dose, optimally suiting for certain medical disorders while shRNA constructs can be optimized using the endogenous processing machinery for high potency and sustainable effects using low copy numbers. Moreover, the manufacturing process of siRNA is simple while optimized shRNA results in less off-target effects.

Small interfering RNA (siRNA) and short hairpin RNA (shRNA) are two types of regulatory RNA involved in the silencing pathways of the RNA interference pathway, which leads to the degradation of target mRNAs in a sequence-specific manner, depending upon complementary binding of the target mRNA.

Small interfering RNA or siRNA is a type of double-stranded RNA molecule which is small in size; about 21 to 25 nucleotides in length. It is one of the key approaches to RNA interference (RNAi) pathway, which uses the formation of double-stranded RNA for gene silencing. Generally, the RNAi pathway is responsible for the knockdown of proteins as a post-transcriptional regulation of gene expression. 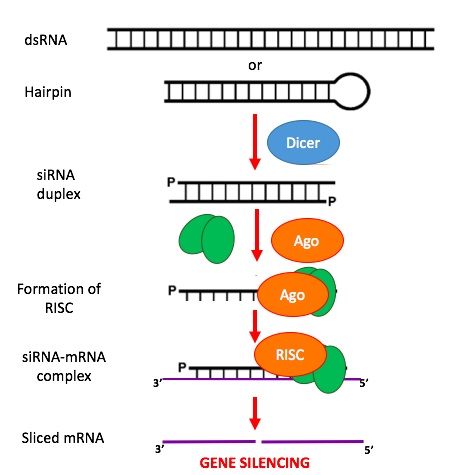 Furthermore, the cleavage of long RNA duplexes results in the formation of siRNAs. Here, the Dicer, a dsRNA-specific RNase III enzyme, forms a complex with the double-stranded RNA. This enzyme cleaves the dsRNA into siRNAs, leaving an overhang of two nucleotides at the 3’ end. After that, these siRNAs form complexes with RISC (RNA-induced silencing complex) which is responsible for the degradation of the sense strand from the RNA duplex.

Short hairpin RNA or shRNA is a type of comparatively long RNA molecule with a region which forms a hairpin loop. Generally, shRNA is an artificial molecule formed inside the cell with the introduction of corresponding RNA genes to the cell through a vector. Actually, it mimics the miRNA molecules involved in the formation of RNA duplexes naturally inside the cell. 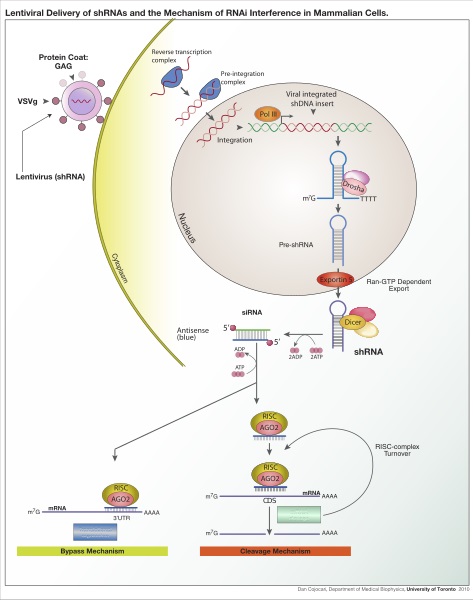 In addition, the stem region of the shRNA is formed by the hybridization with the target mRNA molecule. After forming the duplex, the Dicer binds to the complex and cleaves the duplex into siRNA molecules. These siRNA molecules bond with the RISC and degrades the sense strand in the same way as mentioned above.

Similarities Between siRNA and shRNA

Difference Between siRNA and shRNA

Moreover, siRNA is a double-stranded RNA molecule usually 21 to 25 nucleotides in length while shRNA is about 80 base pairs in length and includes a region of internal hybridization, which creates a hairpin structure. Hence, this is also a difference between siRNA and shRNA.

Also, another difference between siRNA and shRNA is that siRNA is short while shRNA are comparatively long.

Besides, siRNA forms dsRNA with a 3’ end overhangs of 2 nucleotides, which activates RNA interference (RNAi) while shRNA contains a loop structure which is processed to siRNA.

Additionally, relationship with miRNA is also a difference between siRNA and shRNA. siRNA are produced by the processing of miRNA either by DICER or DROSHA proteins endogenously while shRNA mimics miRNA.

siRNA is transient by means of the effect per dose while shRNA is more sustainable.

Potency is another difference between siRNA and shRNA. siRNA has a low potency while shRNA has a high potency.

The manufacturing process of siRNA is simple while optimized shRNA results in less off-target effects embedded in a miRNA scaffold.

siRNA or small interfering RNA is a type of non-coding, regulatory RNA involved in the sequence-specific degradation of target mRNA in the RNA interference pathway. It is a short RNA molecule that forms an RNA duplex with the target. Also, it is resulted by the endogenous processing of miRNA. In contrast, shRNA or short hairpin RNA is a type of artificial RNA, which mimics miRNA. It is degraded into siRNA by the same cellular mechanisms used by the degradation of miRNA. Generally, shRNA is longer than siRNA and contains a hairpin loop. However, the main difference between siRNA and shRNA is their method of sequence-specific degradation of target mRNA in RNAi.