The main difference between stoat and weasel is that stoats are larger than weasels and have a longer tail with a black tip, while weasels have a small and chubby tail. 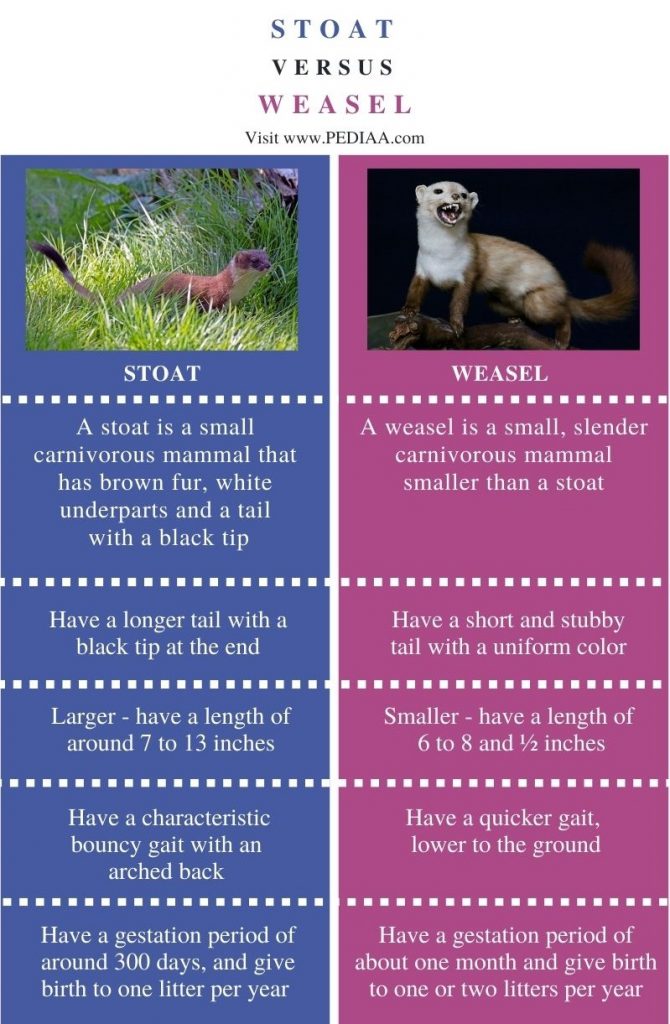 Stoat is a mustelid that is native to the northern part of North America and Eurasia. They have long, low-slung bodies with small, triangular heads. They are somewhat similar in appearance to ferrets and weasels. Adult stoats generally weigh between 6 and 9 ounces, and their length is around 7 to 13 inches. Adult males are about 1/4th larger than females. Although they are small animals, they are energetic predators. They prey on rabbits and small rodents. Their body shape is well adapted to follow prey into narrow tunnels or burrows. Adult stoats can even kill rabbits that are larger than themselves by biting the base of rabbit skulls. These animals are active both day and night. We can easily spot them in open habitats like grasslands and sand dunes. 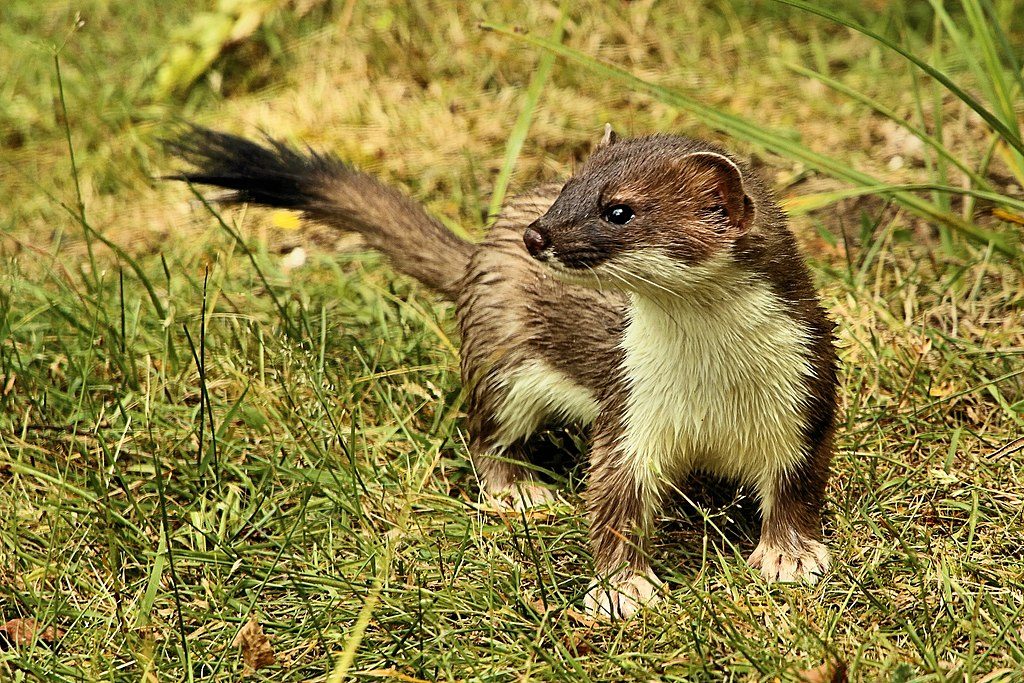 Stoats usually have brown fur with a white bib and underbelly and a black tip on the end of the tail. Their tails tend to be longer than that of weasels. During the winter, they grow a white coat. This also happens if they live in cold climates. This coat is called ermine and is treasured by trappers and hunters. However, stoats living in warmer climates do not change their color at all. In addition, stoats mate in the summer, but females can delay the implantation of the fertilized eggs for almost a year. Generally, they one litter with 6 – 12 kits per year.

Weasels are small carnivorous mammals that are similar to stoats. They also belong to the same family as stoats: the family Mustelidae. Weasels are found in all continents in the world except Australia and harsh polar regions. There are many weasel species varying in size, color, and behavior, depending on their location. The European weasel or the common weasel is the most common weasel species. 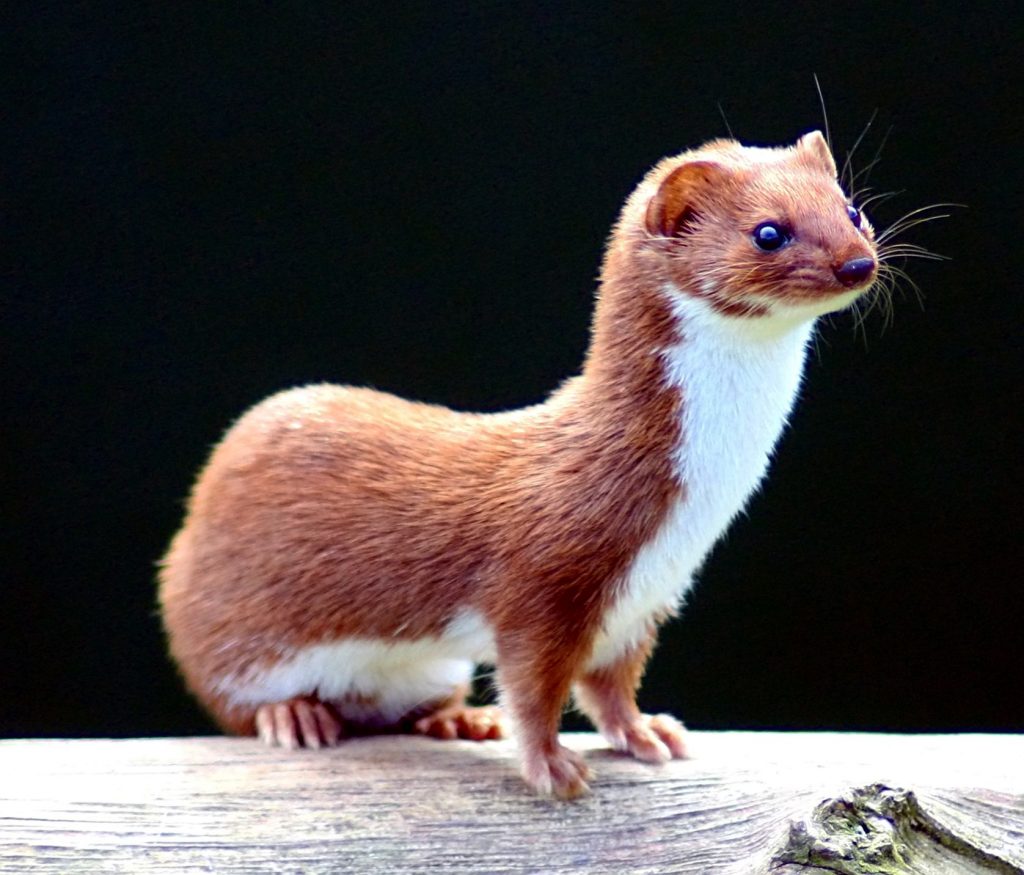 Weasels are the smallest predators in the world. They can vary in length from 6 to 8 and 1⁄2 inches, and males are always bigger than females. Weasels are even smaller than stoats. They have long and slender bodies, which makes it easier for them to follow prey into narrow spaces. Moreover, weasels generally have brown or red upper coats with white bellies. In some locations, stoats grow a white coat during the winter. Furthermore, weasels have shorter tails than stoats – with a size around 1 – 2 inches.

In addition, weasels are usually active during the night and sleep during the day. Female weasels have one or two litters in a year, and a litter may have up to 15 offspring. Their gestation period is about a month.

Difference Between Stoat and Weasel

Stoats have a longer tail with a black tip at the end, whereas weasels have a short and stubby tail with a uniform color.

Stoats are larger than weasels. Adult stoats have a length of around 7 to 13 inches, while weasels have a  length from 6 to 8 and 1⁄2 inches.

While stoats have a characteristic bouncy gait with an arched back, weasels have a quicker gait, lower to the ground.

Since both stoats and weasels have a similar appearance, most people find it difficult to identify the difference between the two. However, the easiest way to identify the difference between stoat and weasel is by looking at their tails. Stoats have a longer tail with a black tip, while weasels have a small and chubby tail. In addition, stoats are larger than weasels.