Suet and lard are two types of animal fats that have many similarities and are often used interchangeably. Both have several interesting culinary uses. However, there are several differences between these two animal fats. 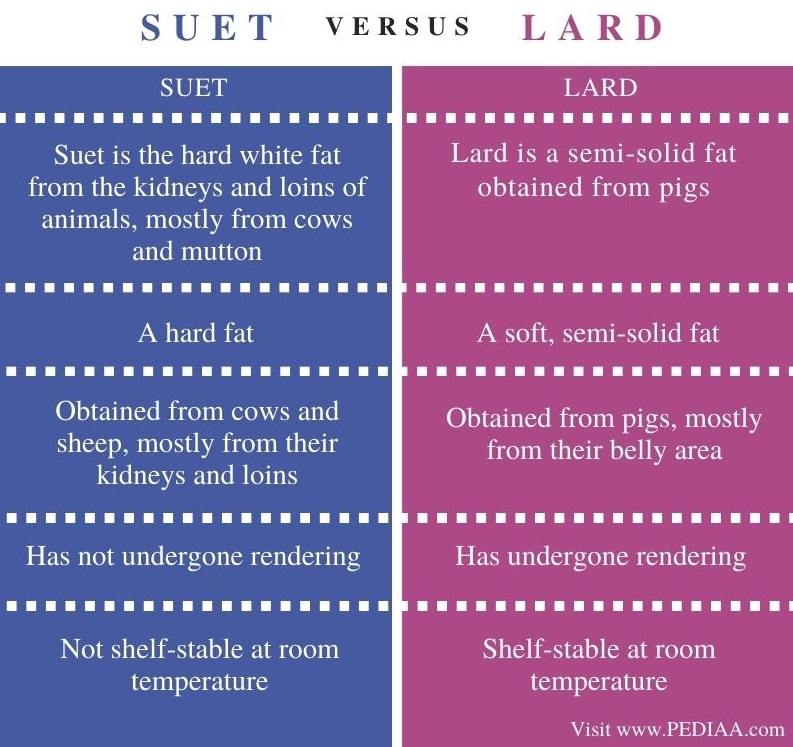 Suet is the hard white fat from the kidneys and loins of animals, mostly from cows and mutton. Once this fat is removed, it goes through clarifying, chopping and then boiling in water. This removes any impurities from meat. After cooling, the water and fat sperate, and we call the remaining fat suet. The melting point of suet is between 45 °C and 50 °C, and its congelation is between 37 °C and 40 °C.  Since it has a high smoke point, it is perfect for deep frying and making pastries.

Suet is mainly used to make tallow, although it is also used for traditional puddings like Christmas pudding. Suet is made into tallow through rendering. This process involves melting and prolonged simmering, followed by straining and cooling. In addition to these uses, suet can also be used to make soap and candles.

Also, note that vegetarian suet is not actually made from animal fat – it’s often made from vegetable oils.

Lard is a semi-solid white fat we obtain pig fat. Lard can be made from any part of the pig that has a high concentration of fatty tissues. Moreover, lard is very similar to suet and often has similar uses. They are also used as substitutes for each other.

There are two methods to render lard: dry rendering and wet rendering. Dry rendering involves exposing the fat to direct high heat in the absence of water while wet rendering method involves steaming or boiling the fat at a high temperature, which results in lard floating in the mixture due to its insolubility in water. The rendering process and the part of the pig from which the fat was taken can affect the texture, taste and flavour of the lard. In fact, properly rendered lard is almost odourless and tasteless. 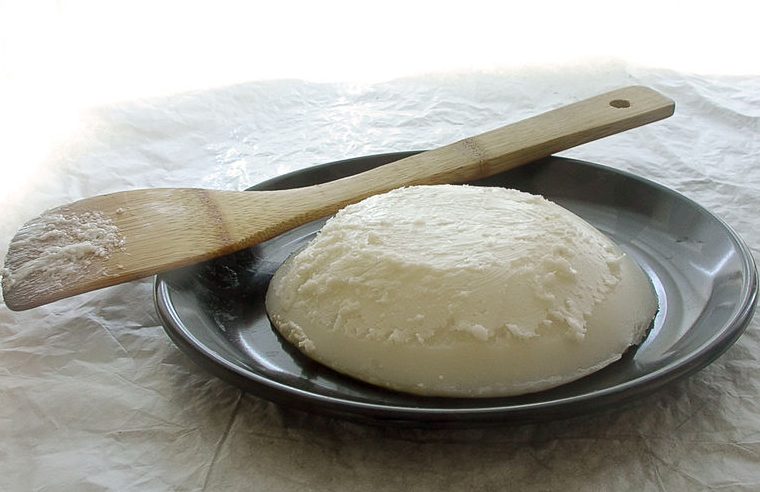 Like suet, lard has several culinary uses. In pastry making, chefs sometimes use lard as a substitute for butter. Moreover, owing to its high smoke point, lard is ideal for deep frying. We can also use it as a spread, just like butter or dripping. In addition, lard has industrial uses in the production of cosmetics, as well as in the creation of bio-fuel.

Difference Between Suet and Lard

Suet is the hard white fat from the kidneys and loins of animals, mostly from cows and mutton, while lard is a semi-solid fat obtained from pigs.

While suet is a hard fat, lard is a soft, semi-solid fat.

Moreover, suet is used in traditional steamed British puddings and pastries, pies and mincemeat dishes, while lard is used as a spread like butter, and as a shortening for pastries and pie crusts.

1. Lemm, Elaine. “What Is Suet and How Is It Used?” The Spruce Eats, Available here.