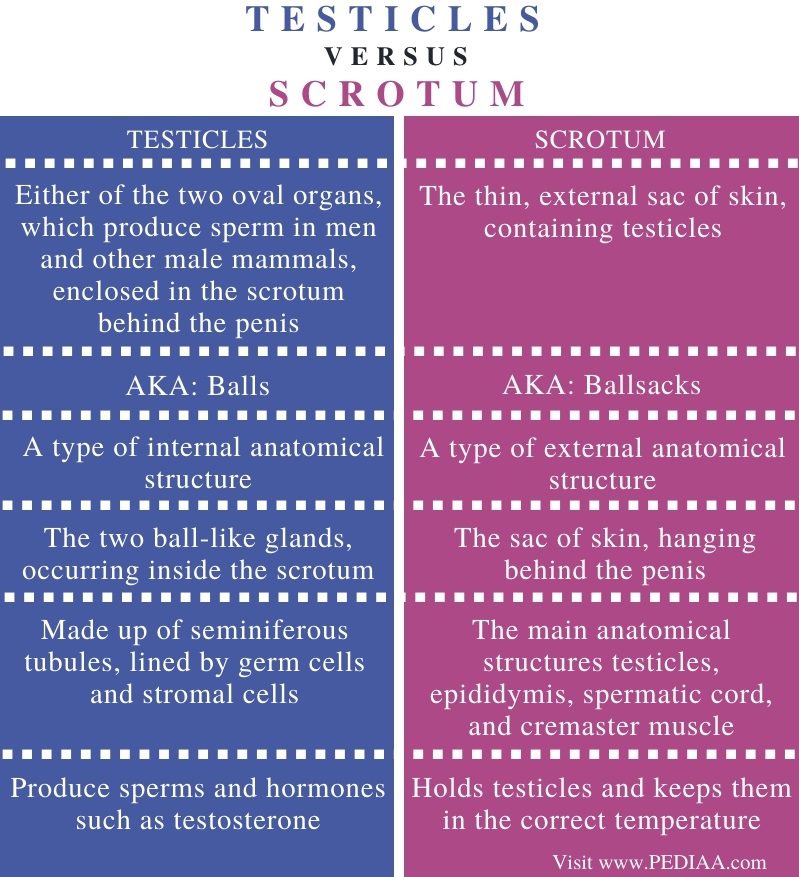 Testicles, testis, or balls are the gonads, or the reproductive glands, of the male reproductive system and is homologous to the ovary in females. Also, the main function of them is to produce sperms and androgens, as testosterone.

In humans, two testicles, which are 5 cm long and egg-shaped, occur inside the sac of skin called the scrotum. Also, two, tough, and fibrous tissue layers or tunica cover each testicle in which the outer layer is tunica vaginalis, while the inner layer is tunica albuginea. Furthermore, each testicle contains lobules with tiny, U-shaped tubes called seminiferous tubules. Usually, about 800 seminiferous tubules occur per testicle being tightly coiled.

Moreover, germ cells and stromal cells are the two types of cells that line the seminiferous tubules. Of these, germ cells undergo spermatogenesis, the process of producing sperms by undergoing meiosis and maturation. Meantime, Sertoli cells and Leydig cells are the two types of stromal cells. Here, Sertoli cells support the germ cells by helping make and transport sperms. And, Leydig cells produce androgens; mainly testosterone responsible for the maintenance of secondary sexual characteristics and the development and functioning of reproductive organs in males. 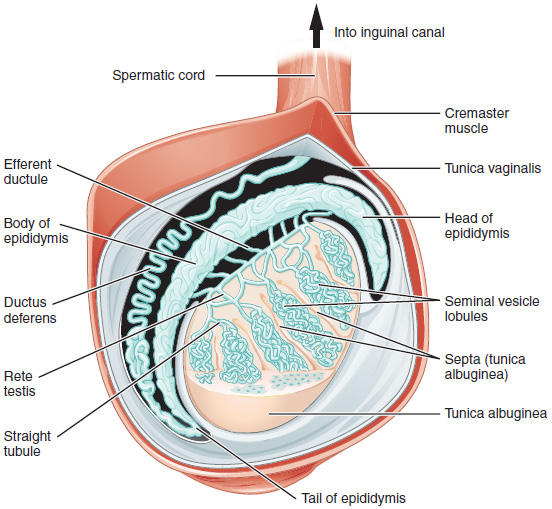 Additionally, rete testis is a series of uncoiled, interconnected channel to which the seminiferous tubules open. Also, it connects to a tightly coiled tube called the epididymis, which ultimately joins to a long, large duct called the vas deferens. In this, the epididymis stores sperm cells so they can completely mature. Later, mature sperms travel through the vas deferens while mixing with the fluids made by the seminal vesicles and the prostate gland, creating semen along the way.

What is the Scrotum

Scrotum, or ballsack, is the sac of skin that holds and encloses testicles in males. Anatomically, it sits next to the upper thighs, hanging behind the penis. The spermatic cord, containing a tough connective tissue and muscles holds testicles in the scrotum. Also, one testis inside the scrotum is lower than the other to avoid compression. Moreover, at puberty, hairs grow outside and cover it. Besides, it tightens during the penile erection and when exposed to cold temperature.

The scrotum is a distention of the perineum and carries some abdominal tissues into its cavity including the testicular artery, testicular vein, and pampiniform plexus. In this, perineal raphe is the line down the middle of the scrotum, dividing it into two. Also, it joins with the internal septum, which is the scrotal septum, and divides the scrotum into two from inside. Furthermore, the four anatomical structures, which occur inside the scrotum are the cremaster muscle, epididymis, spermatic cord, and the testis. Of these, the cremaster muscle surrounds the testicles and the spermatic cord. Apart from the cremaster muscle, dartos fascia is another type of muscle in the skin of the scrotum. The main function of these muscles is to move testicles away from and towards the body depending on the environmental temperature. Usually, at high temperatures, the scrotum hangs lower.

Furthermore, as mentioned above, epididymis stores sperms until maturation. As a rule, testicles produce sperms. In general, sperm maturation takes around 80 to 90 days. And, these sperms survive at a temperature slightly lower than the body temperature. Typically, scrotum keeps testicles around 35 degrees of Celsius. Because, higher temperatures affect the process of spermatogenesis. Besides, the spermatic cord holds testicles in the scrotum. In addition to these, the scrotum contains blood vessels, lymphatic vessels, nerves, and vas deferens, the tube that moves sperm out of the epididymis into ejaculatory ducts.

Similarities Between Testicles and Scrotum

Difference Between Testicles and Scrotum

Testicles refer to either of the two oval organs that produce sperm in men and other male mammals, and it is enclosed in the scrotum behind the penis. Here, the scrotum refers to the thin, external sac of skin, containing testicles.

Testicles are the two ball-like glands, occurring inside the scrotum, while scrotum is the sac of skin, hanging behind the penis.

Testicles are made up of seminiferous tubules, lined by germ cells and stromal cells, but the main anatomical structures inside the scrotum are the testicles, epididymis, spermatic cord, and cremaster muscle.

Testicles produce sperms and hormones such as testosterone, while scrotum holds testicles and keeps them in the correct temperature.