Home » Science » Biology » What is the Process of Mitosis

This article attempts to provide you a complete answer to the question ‘what is the process of mitosis.’ Cell cycle is mainly divided into two sections namely, (a) interphase, which includes G 1, S and G2, and (b) M phase that includes mitosis and cytokinesis. Mitosis is one of the most astonishing biological processes that occurs only in eukaryotic cells. Mitosis is defined as the process by which the separation of duplicated chromosomes forms two identical sets of chromosomes. Interphase is known as the preparation phase for mitosis. The changes occur in the cell during the interphase are vital for the completion of mitosis. Mitosis is followed by the cytokinesis, where the division of the cytoplasm takes place to form two separate daughter cells. Even though mitosis is a continuous process, biologists have divided the entire process into five phases for their easiness. Those five phases are prophase, prometaphase, metaphase, anaphase and telophase. 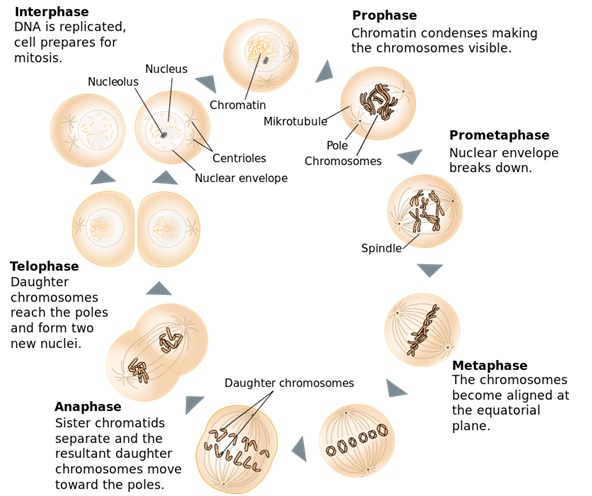 Prophase is the first phase of mitosis, during which the chromosomes condense and appear as two sister chromatids that are held together at the centromere. At the same time, the mitotic spindle starts to form and nuclear envelope begins to break down during this phase. The condensed chromosomes can be clearly observed through a light microscope with the highest magnification during this phase.

During the prometaphase, microtubules (spindle fibers) get attached to each sister chromatid of chromosome. Each chromosome is aligned in a way that enables the attachment of two microtubules from opposite poles to kinetochores of sister chromatids. The bipolar attachment of microtubule is crucial during this process. The third major event happening during the prometaphase is the movement of chromosomes toward the equator of the cell. Researchers proposed two mechanisms to explain these chromosome movements: (a) force produced by the assembly and disassembly of microtubules, and (b) force produced by the motor proteins located at the kinetochore and poles.

During the metaphase, all chromosomes lineup at the equator of the cell. The imaginary plane where all the chromosomes are arrayed is called the metaphase plate. The cell is prepared to separate the sister chromatids during this stage. Hence, metaphase is an important transitional phase in which all the checkings are done before moving to the next step.

When compared to other stages, anaphase is the shortest phase in which the chromatids separation takes place. At the beginning of the anaphase, cohesion proteins concentrated at centromere are degraded. This action helps to separate the sister chromatids from each other. After the degradation of proteins, the sister chromatids are pulled toward the opposite poles by microtubules. In this phase, there are two movements that take place namely, anaphase A, during which the kinetochores (where microtubule is attached to sister chromatid) are pulled toward the poles and anaphase B, during which, the poles move away from each other.

Telophase is the last stage of mitosis. During this phase, the clustering and decondensing of chromosomes at the opposite poles occur. At the same time, nuclear membranes start to re-form around the chromosome clusters and spindle apparatus disassembles to form cytoskeleton of daughter cells.

All these phases are crucial for the completion of mitosis in eukaryotic cells and out of most is the anaphase, because it is the phase where actual separation of sister chromatids takes place.