Abbasid and Umayyad caliphates (a caliphate is an Islamic form of government led by a caliph) are two of the four major Arab caliphates in the Islamic world, that were established after the death of Muhammad. The main difference between Abbasid and Umayyad empire is the developments that took place in the Islamic culture during them;  Abbasid is considered as the golden age of Islamic culture since it saw numerous developments in art, literature, architecture, science and technology.

This article will look at,

3. What is the difference between Abbasid and Umayyad Empire?

What is Abbasid Empire

Abbasid was the third Islamic caliphate that was established after the death of the Islamic prophet Muhammad. This caliphate was founded by the descendants of Muhammad’s uncle Abbas ibn Abd al-Muttalib (566–653 CE). The name of this dynasty is derived from this person’s name.

Abbasid dynasty came to power by overthrowing the Umayyad Empire. This dynasty ruled from 750-1258. The Abbasids took the support of Persians to overthrow the Umayyad caliphate. When the new caliphate was established the capital was moved from Damascus to Baghdad. This geographical shift helped to integrate the Persian and Arabic cultures.

Abbasid caliphate emphasized the value of knowledge. This dynasty is also considered to be the golden age of Islamic culture with regard to art, architecture, literature, science and technology. However, the status of women in the society became negatively affected in this age. During the preceding caliphates, women enjoyed a higher position in the society, but during Abbasid, practices such as veiling and cloistering came into being, lowering the position of women in the society.

The power of Abbasid caliphate came to an end with the sack of Baghdad by the Mongols in 1258. However, the Abbasid line continued to have religious authority until after the Ottoman conquest of Egypt.

Coin of the Abbasid Caliph al-Ma’mun

What is Umayyad Empire

Umayyad Empire or caliphate was the second major Arab caliphate that succeeded the prophet Muhammad. This was established by a powerful family from Mecca. However, Umayyad caliphate only ruled from 661 to 750.

The capital city of the Umayyad Empire was Damascus. During this period, Arab Muslims were at the top of the society; non-Arabs were considered to be inferior and were kept in lower positions. The non-Arabs in the society later supported the Abbasids to overthrow this caliphate.

During this time, the focus was mainly on military conquest; knowledge was not a major focus. Umayyad caliphate also tolerated people of other religions such as Christians and Jews. However, they had to pay a tax to continue practicing their religion. Women in Umayyad caliphate had a higher status compared to the caliphates that came after this caliphate. 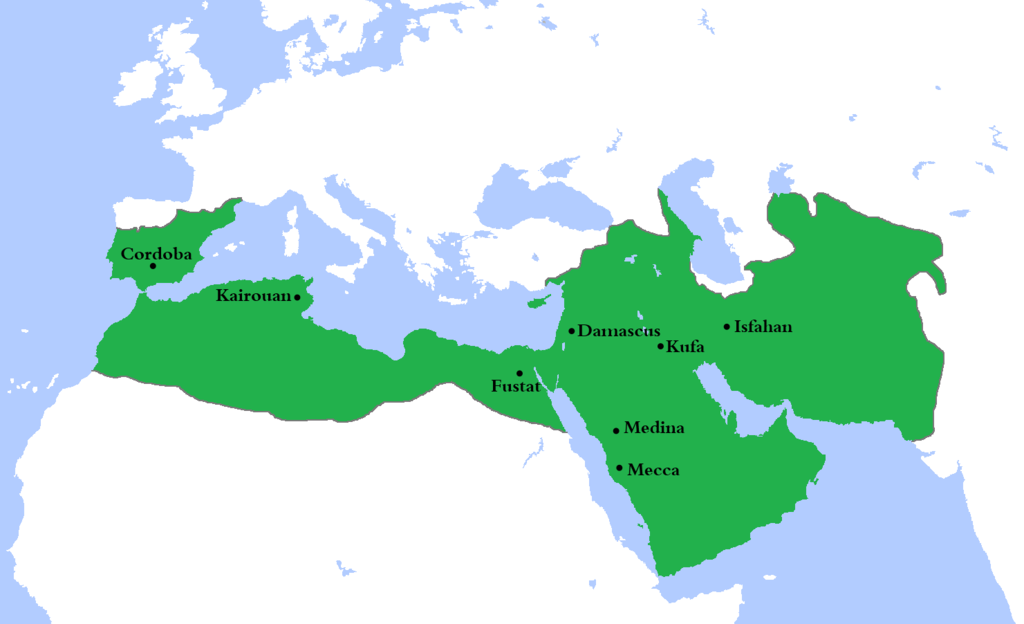 Difference Between Abbasid and Umayyad Empire

Abbasid: Abbasid Empire was founded by the descendants of Muhammad’s uncle.

Umayyad: Umayyad Empire was founded by the Umayyad family of Mecca.

Abbasid: Abbasid is the third caliphate.

Umayyad: Umayyad is the second caliphate.

Treatment of other Ethnicities

Abbasid: Non-Arabic Muslims were given special privileges in the court.

Tolerance of other Religions

Abbasid: Many non-Muslims converted to Islam.

Umayyad: Other religions such as Christianity and Judaism were tolerated.

Abbasid: The capital was Baghdad.

Umayyad: The capital was Damascus.

Abbasid: Women lost their status in the society.

Umayyad: Women enjoyed a high status in the society compared to Abbasid caliphate.

Abbasid: Abbasid is considered the golden age of the Islamic culture; there were many developments in art, literature, architecture, science and technology.

“Umayyad750ADloc” By Gabagool – Own work (CC BY 3.0) via Commons Wikimedia