Muscles are made up of proteins. Actin and myosin are two proteins in muscles, involved in the muscle contraction in animals. They control the voluntary muscular movements of the body in concert with the regulatory proteins known as tropomyosin, troponin, and meromyosin. Actin and myosin proteins form filaments arranged in the myofibrils in a longitudinal manner. The main difference between actin and myosin is that actin forms a thin filament whereas myosin forms a thick filament. The sliding over of the two filaments over one another in a series of repetitive events leads to the contraction of the muscles. 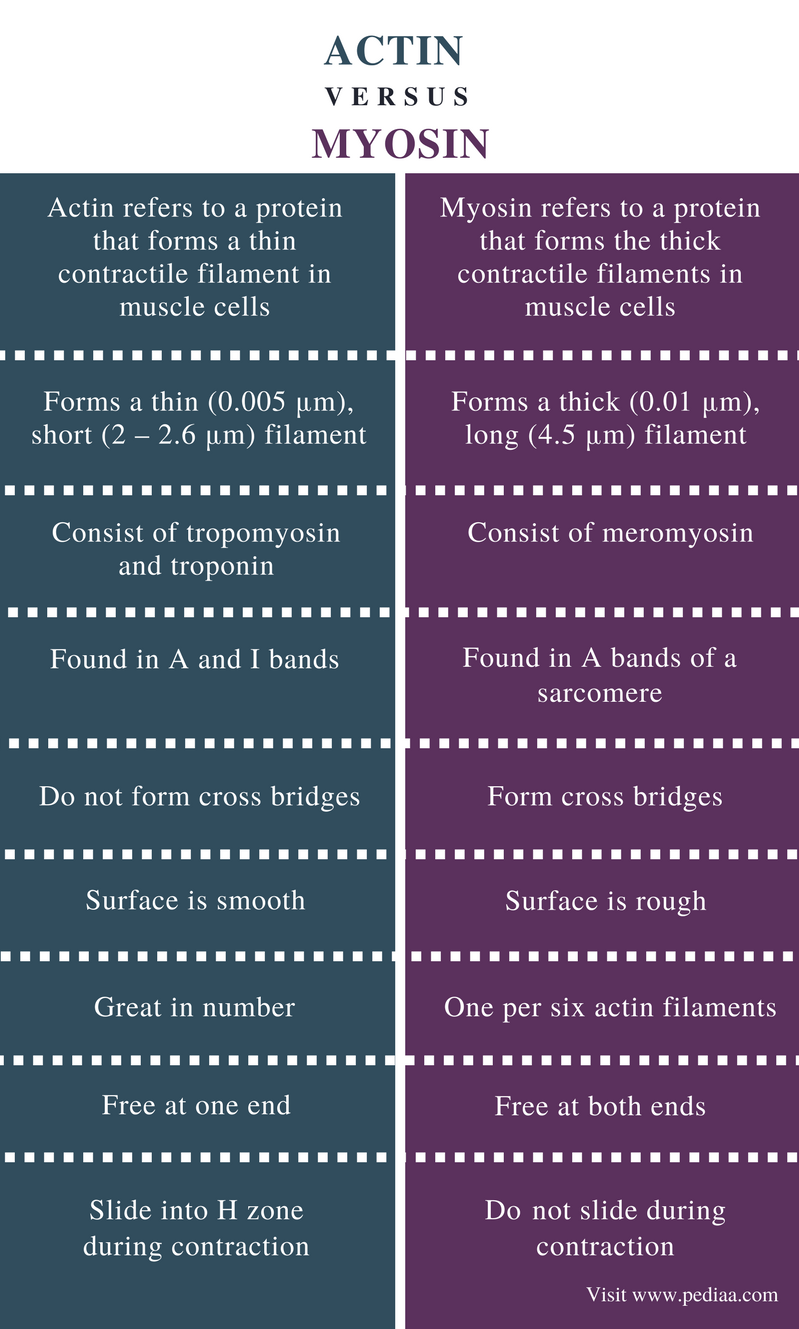 Actin refers to a protein that forms a thin contractile filament in muscle cells. It is the most abundant protein in eukaryotic cells. Actin is a highly conserved protein. The two forms of the actin are monomeric (G-actin) and filamentous (F-actin). Under physiological conditions, the G-actin is readily polymerized to form F-actin by using the energy from ATP. The formation of a thin actin filament is shown in figure 1. 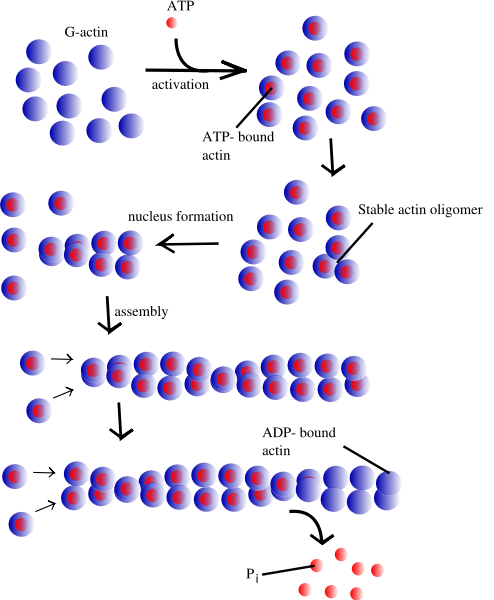 Though the polymerization of actin filaments starts from both ends of the filament, the rate of the polymerization in each end is not equal. This results in an intrinsic polarity in the filament. The rapidly-polymerizing end is called the barbed (+) end while the slow polymerizing end is called the pointed (-) end. The association of the tropomyosin and troponin stabilizes the actin filament. The subdomains of the G-actin is shown in figure 2. 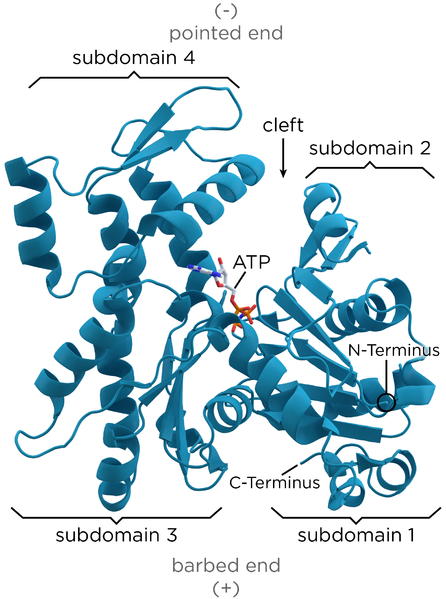 The shape and movement of the cell depend on the actin filaments. The main function of actin filaments is to form the dynamic cytoskeleton of a cell. The cytoskeleton gives structural support and links cell interior to its surroundings. Actin filaments are also involved in the formation of filopodia and Lamellipodia that aid the cell motility. Actin filaments aid in the transport of organelles to the daughter cells during mitosis. The complex of thin filaments in muscle cells generates forces, supporting the contraction of the muscles.

Myosin refers to a protein that forms the thick contractile filaments in muscle cells. All myosin molecules are composed of one or two heavy chains and several light chains. Three domains can be identified in this protein: head, neck, and tail. The head domain is globular and contains actin and ATP binding sites. The neck region contains a α-helical. The tail site contains the binding sites for different molecules. The structure of the myosin is shown in figure 3. 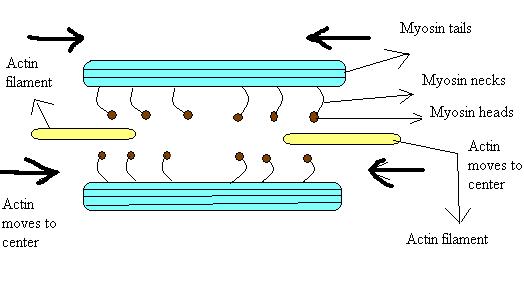 Thirteen different classes of myosin can be identified as myosin I, II, III, IV etc. The myosin I is involved in the transport of vesicles. The myosin II is responsible for the muscle contraction. The structure of a skeletal muscle is shown in figure 4. 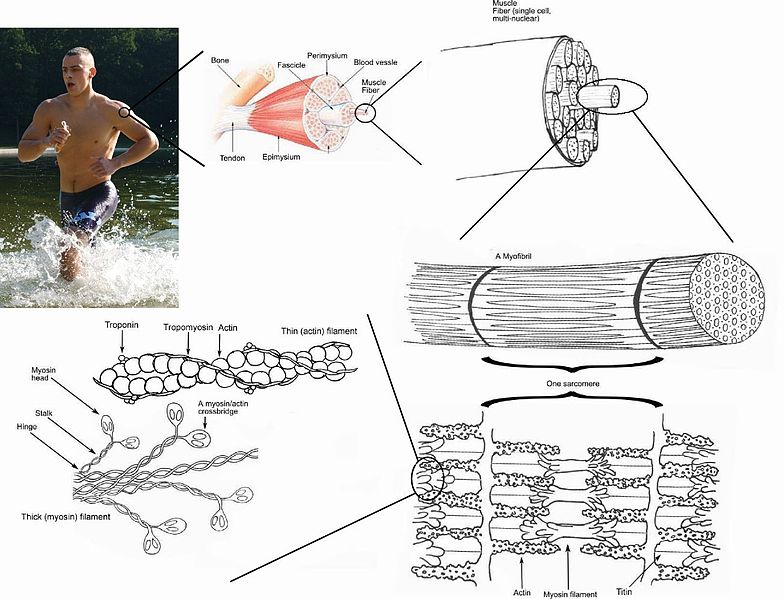 The contraction of muscles is described by the sliding filament theory. The thin actin filaments slide over a thick myosin filament, generating tension in the muscle.

Similarities Between Actin and Myosin

Difference Between Actin and Myosin

Actin: Actin refers to a protein that forms a thin contractile filament in muscle cells.

Myosin: Myosin refers to a protein that forms the thick contractile filaments in muscle cells.

Size of the Filament

Actin: Actin filaments are found in A and I bands.

Myosin: Myosin filaments are found in A bands of a sarcomere.

Actin: The surface of the actin filaments is smooth.

Myosin: The surface of the myosin filaments is rough.

Actin: Actin filaments are free at one end.

Myosin: Myosin filaments are free at both ends.

Myosin: Myosin filaments do not slide during contraction.