Proteins are an essential group of chemical macromolecules for the survival of life. They are involved in most of our bodily metabolic functions and are constructed mainly from amino acids. This article explores,

1. Relationship Between Proteins and Amino Acids

2. How are Proteins Constructed from Amino Acids

What is the Relationship Between Proteins and Amino Acids

How are Proteins Constructed from Amino Acids

As mentioned above, Proteins are a class of macromolecules. A macromolecule is a large, polymerised entity. A polymer is made of single units called monomers. Therefore, the monomers of proteins are amino acids. Amino acids are able to join in different sequences to form longer chains called peptide chains. When amino acids join with each other in the chain extensions, the type of bond they form is called a peptide bond, which is essentially an amide bond. i.e. (-[C=O]-NH-)

The basic structure of an amino acid consists of main groups around the central Carbon atom. These groups include a carboxylic acid group (-COOH), an amine group (-NH2), an alkyl group (R), and a Hydrogen atom. When the chain extension takes place for the formation of peptide chains, the amine group and the carboxylic acid group align themselves in an end-to-end fashion. The carboxylic group of one amino acid reacts with the amine group of another amino acid to form the amide bonds called peptide bonds. Amino acids differ from each other depending on the nature of their alkyl group which acts as a side chain; the other three groups around the central carbon atom is common for all amino acids. Furthermore, among the 22 proteinogenic amino acids, 9 of them are identified as essential amino acids as they cannot be synthesised by the human body with the use of other compounds. 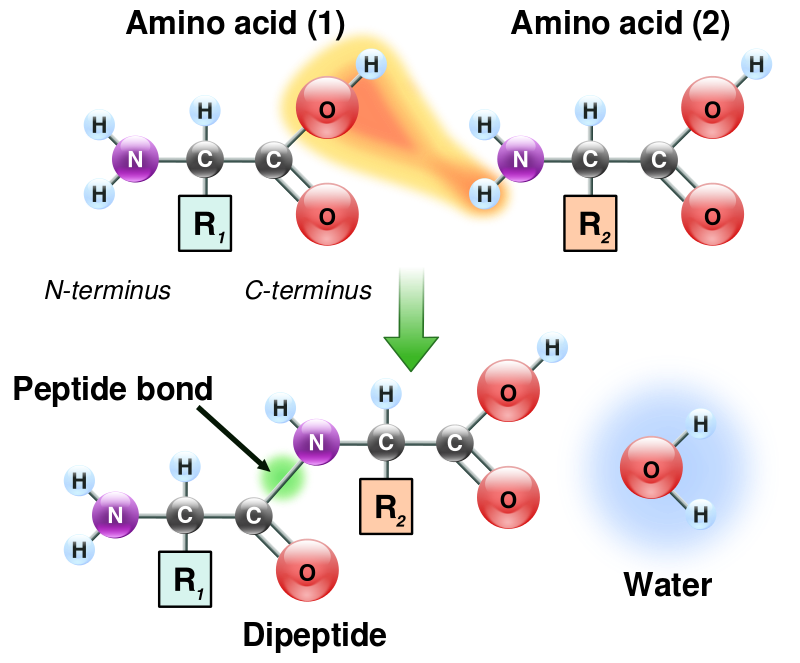 What are Peptide Bonds

When two amino acids react to form a peptide bond, the resulting unit is called a dipeptide. This single unit reaction is called a condensation reaction. When the carboxylic acid group (-COOH) of one amino acid reacts with the amine group (-NH2) of another amino acid, an amide bond/peptide bond is formed with the release of a water molecule. This condensation reaction consumes energy, and the required energy is derived by ATP produced in the human cells.

“Peptidformationball” By GYassineMrabet This vector image was created with Inkscape. – Own work (Public Domain) via Commons Wikimedia