Assonance is a literary device where the same vowel sound is repeated more than two times in nearby words in a phrase or sentence. Assonance is mostly used in the verse to add a rhyming effect not just within the poem, but also within lines. This is also called a vowel rhythm. Assonance can change the mood of the poem. A long vowel sound can decrease the energy at that point of the poem and make the mood serious while higher vowel sounds lighten the mood.

“Try to light the fire.”

“The squeaky wheel gets the grease.”

And every fleck of russet showing clear.”

(“After Apple-Picking” by Robert Frost)

“Betty Botter bought some butter, but she said, this butter’s bitter; if I put it in my batter, it will make my batter bitter…”

Many poets have used alliteration to render rhythm, flow and beauty to their poems. Alliteration makes a text, be it prose or verse, more interesting and appealing. Given below are some extracts to show the use of alliteration in literature.

“I have stood still and stopped the sound of feet.”

“The fair breeze blew, the white foam flew, The furrow followed free;  We were the first that ever burst Into that silent sea.”

(The Rime of the Ancient Mariner by Samuel Taylor Coleridge)

“Once upon a midnight dreary, while I pondered, weak and weary,

..While I nodded, nearly napping, suddenly there came a tapping

..And the silken,  sad, uncertain rustling of each purple curtain..”

(The Raven by Edgar Allan Poe)

“From forth the fatal loins of these two foes;
A pair of star-cross’d lovers take their life.”

(Romeo and Juliet by William Shakespeare)

Difference Between Assonance and Alliteration

Assonance is the repetition of vowel sounds in quick succession.

Alliteration is the repetition of consonants at the beginning of close by words.

Assonance adds a rhyming effect within the lines and assists in changing the mood.

Alliteration is used in both prose and verse, it is commonly used in tongue-twisters as well. 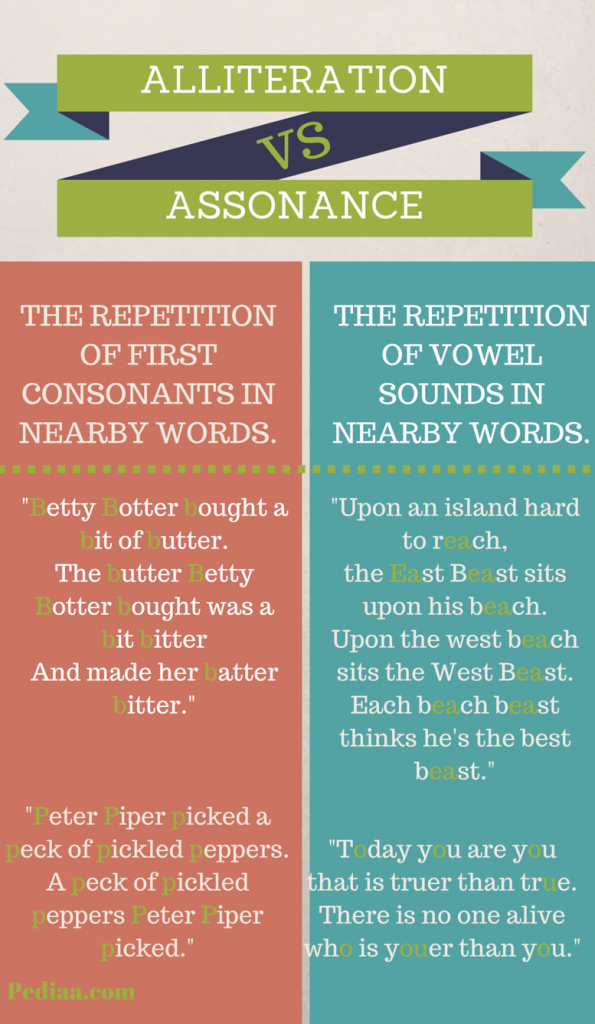