The main difference between apoptosis and autolysis is that apoptosis is a type of programmed cell death, whereas autolysis is a form of self-digestion of cells through the action of their own enzymes. Moreover, apoptosis occurs through a series of biochemical processes linked with morphological changes while autolysis is a biological process which occurs as a result of enzymatic action. 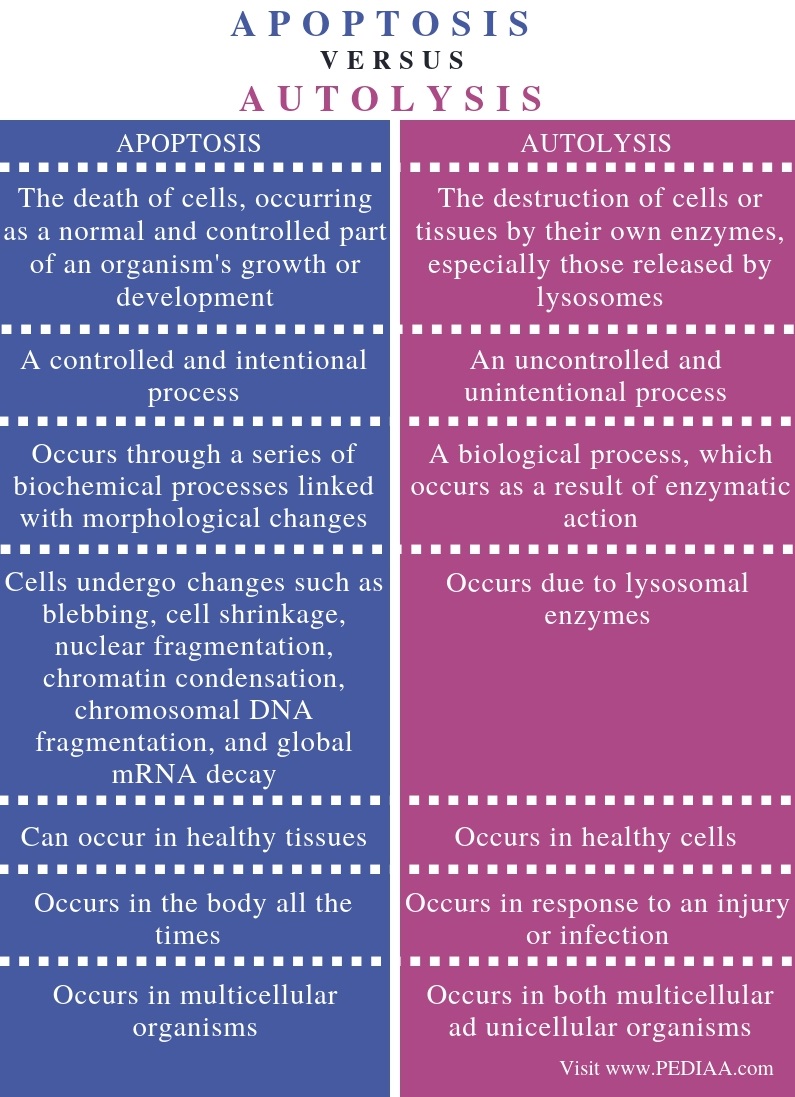 Apoptosis is a process of programmed cell death (PCD), which consists of a sequence of events leading to the death of the cell. Generally, it plays a key role in the development of the organism. It is also important for the normal process of cell ageing. Therefore, it is a part of the regular physiological activity of many healthy tissues of multicellular organisms. The other types of programmed cell death include autophagy, ferroptosis, and necroptosis. 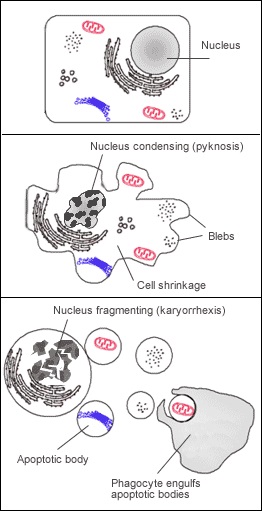 Furthermore, apoptosis occurs through a series of characteristic morphological changes in the cell. They occur due to different biochemical events of the process of apoptosis. Basically, these changes include chromatin aggregation, cytoplasmic and nuclei condensation, and the partition of the cytoplasm and nucleus into membrane-bound vesicles called apoptotic bodies. Generally, these apoptotic bodies contain intact ribosomes, mitochondria, and nuclear material. Macrophages or adjacent epithelial cells recognize the apoptotic bodies to destroy them by phagocytosis. Due to the efficient removal of apoptotic cells by phagocytosis, the immune system of the body does not elicit an inflammatory response.

Autolysis is the uncontrolled and unintentional process of cell death, initiating in response to cell injury or infection. It is also a partial contributor to the necrotic cell death in living tissues. Moreover, it is a type of self-digestion as enzymes released by the breakdown of lysosomes are responsible for the digestion of the cell. Therefore, the cell does not undergo any morphological changes in the process of cell death. 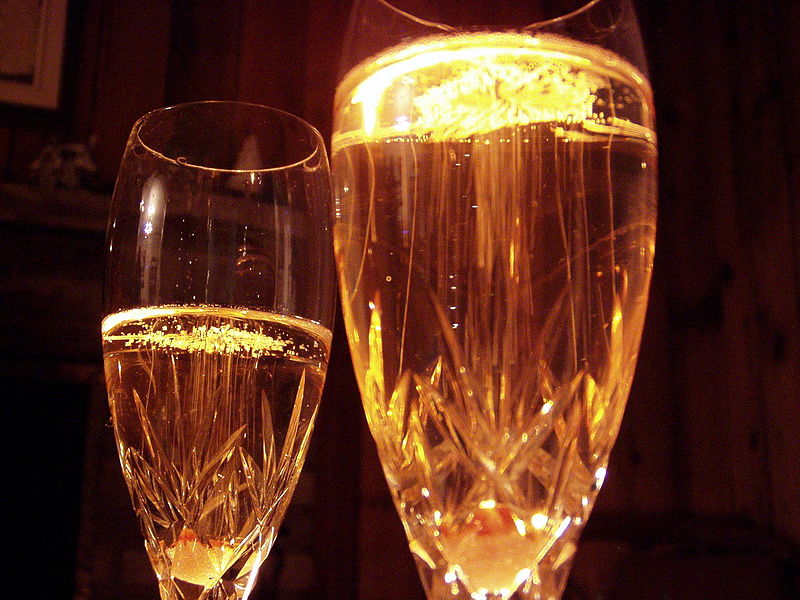 Figure 2: Many of the Flavors Associated with Premium Champagne are Influenced by the Autolysis of the Lees or Dead Yeast during Winemaking.

Moreover, autolysis has many applications in different areas. Generally,  autolytic debridement, which is the deposition of the broken down and liquified products of dead tissue as a wound dressing, is a helpful process in wound healing. Autolyzed yeast is used as a flavour enhancer in the food industry. Also, in yeast extraction, yeast cells are broken down by the addition of salt.

Similarities Between Apoptosis and Autolysis

Difference Between Apoptosis and Autolysis

Apoptosis refers to the death of cells, occurring as a normal and controlled part of an organism’s growth or development, while autolysis refers to the destruction of cells or tissues by their own enzymes, especially those released by lysosomes.

Significance of the Process

Apoptosis occurs through a series of biochemical processes linked with morphological changes while autolysis is a biological process which occurs as a result of enzymatic action.

While apoptosis can occur in healthy tissues,  autolysis occurs in healthy cells.

Apoptosis is the programmed cell death, which is an intentional and highly regulated process. Moreover, it occurs through a series of biochemical changes, which cause different morphological changes in the cell. Apoptosis occurs all the time in the body of multicellular organisms. Autolysis, on the other hand, is an uncontrolled and unintentional process, which results in cell death. Generally, it occurs in response to an injury or infection. Enzymes in lysosomes are also responsible for autolysis. Therefore, it is a type of self-digestion. Hence, the main difference between apoptosis and autolysis is the type of process.