The main difference between ASCII and Unicode is that the ASCII represents lowercase letters (a-z), uppercase letters (A-Z), digits (0-9) and symbols such as punctuation marks while the Unicode represents letters of English, Arabic, Greek etc., mathematical symbols, historical scripts, and emoji covering a wide range of characters than ASCII.

ASCII and Unicode are two encoding standards in electronic communication. They are used to represent text in computers, in telecommunication devices and other equipment. ASCII encodes 128 characters. It includes English letters, numbers from 0 to 9 and a few other symbols. On the other hand, Unicode covers a large number of characters than ASCII. It represents most written languages in the world. Unicode encodes language letters, numbers and a large number of other symbols. In brief, Unicode is a superset of ASCII. 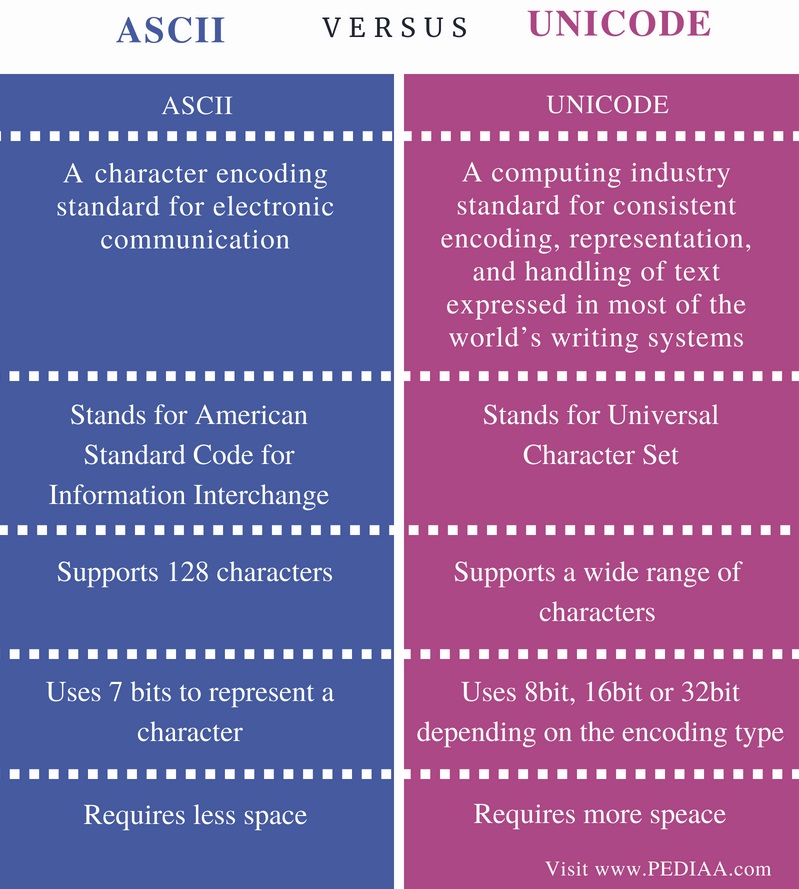 ASCII stands for American Standard Code for Information Interchange. It uses numbers to represent text. Digits (1,2,3, etc.), letters (a, b, c, etc.) and symbols (!) are called characters. When there is a piece of text, ASCII converts each character to a number. This set of numbers is easier to store into the computer memory. In simple words, assigning a number to a character is called encoding.

For example, the upper case ‘A’ is assigned the number 65. Similarly, 65 refer to the letter ‘A’. Likewise, each character has a number in ASCII. The ASCII table contains all the characters with corresponding numbers. ASCII uses 7 bits to represent a character. Therefore, it represents a maximum of 128 (27) characters. 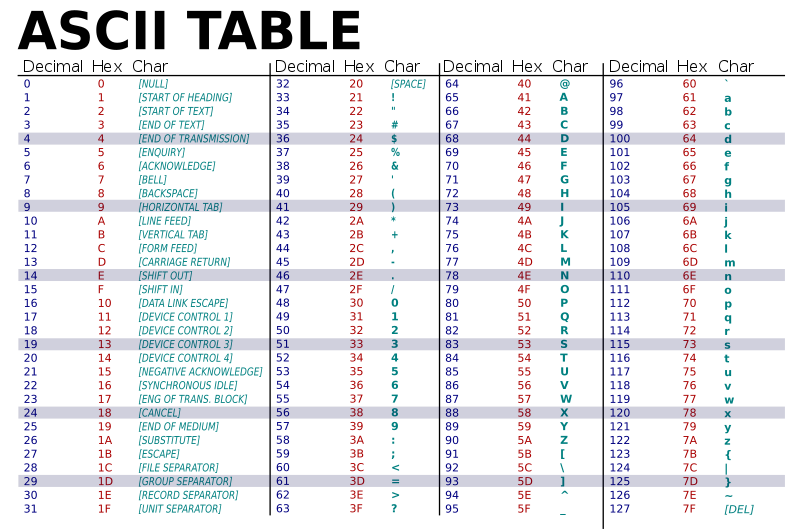 One drawback of ASCII is that it can only represent 128 characters. It does not have representations for most mathematical and other symbols.

Unicode is an alternative. It is maintained by Unicode Consortium. It covers a wide range of characters. It contains representations for letters in languages such as English, Greek, Arabic etc., mathematical symbols, emoji and many more.

There are three types of encoding available in Unicode. They are UTF-8, UTF – 16 and UTF -32. UTF uses 8 bits per character, UTF-16 uses 16 bit per character and UTF-32 uses 32 bits for a character. In UTF-8, the first 128 characters are the ASCII characters. Therefore, ASCII is valid in UTF-8. Usually, Unicode is used in internationalization and localization of computer software. This standard is also used in operating systems, XML, .NET framework and programming languages such as Java.

Relationship Between ASCII and Unicode

Unicode is a superset of ASCII.

Difference Between ASCII and Unicode

The ASCII or American Standard Code for Information Interchange is a character encoding standard for electronic communication. Unicode is a computing industry standard for consistent encoding, representation, and handling of text expressed in most of the world’s writing systems.

ASCII contains representations for digits, English letters, and other symbols. It supports 128 characters. Unicode supports a wide range of characters. This is the main difference between ASCII and Unicode.

Furthermore, the ASCII uses 7 bits to represent a character while the Unicode uses 8bit, 16bit or 32bit depending on the encoding type.

Unicode represents most written languages in the world. ASCII has its equivalent in Unicode. The difference between ASCII and Unicode is that ASCII represents lowercase letters (a-z), uppercase letters (A-Z), digits (0-9) and symbols such as punctuation marks while Unicode represents letters of English, Arabic, Greek etc. mathematical symbols, historical scripts, emoji covering a wide range of characters than ASCII.