The main difference between buttermilk and milk is that the buttermilk is a fermented milk with a slightly sour taste whereas milk is the whitish liquid produced by mammary glands.

The sourness of buttermilk comes through the lactic acid fermentation of milk. Both buttermilk and milk are rich in probiotics. Also, both are used in a variety of food products. Buttermilk is slightly thicker than milk. However, buttermilk contains fewer fats than regular milk. 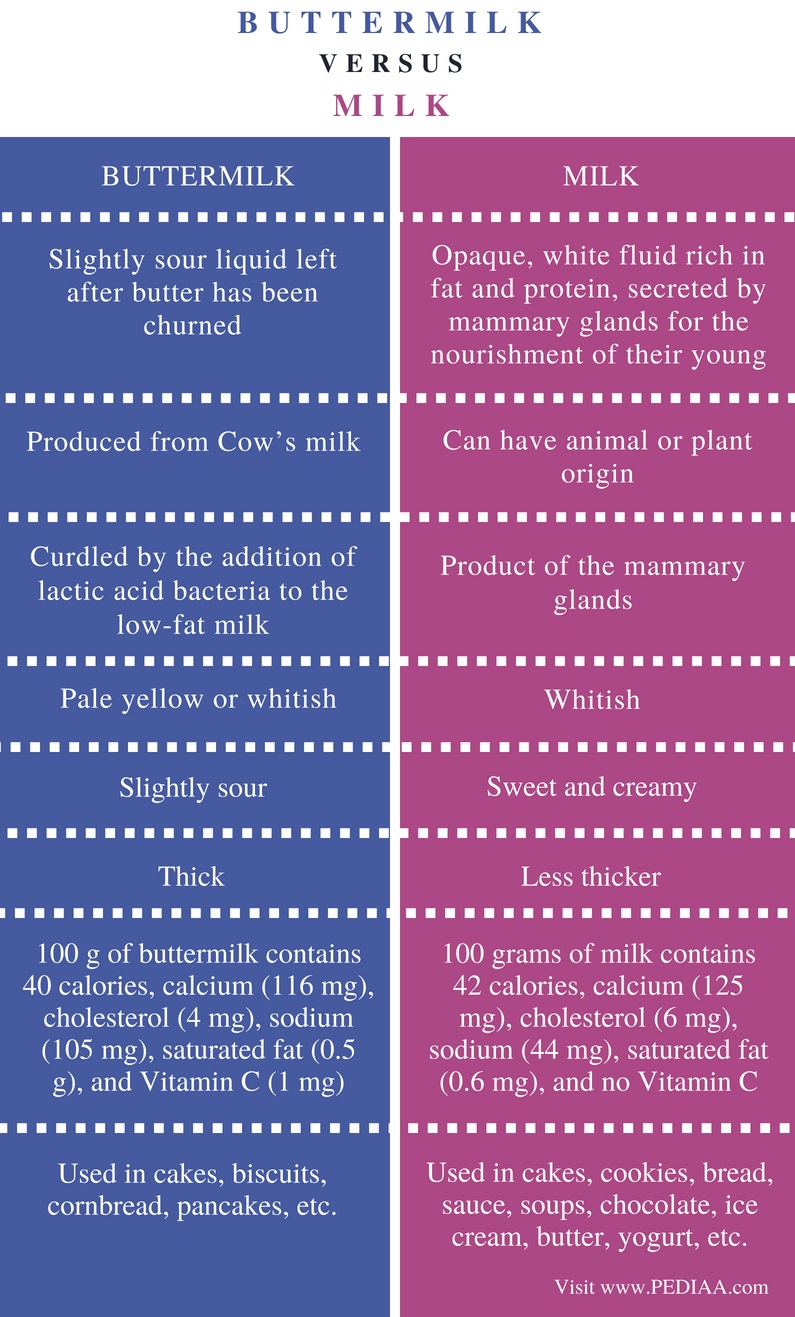 Buttermilk refers to the slightly sour liquid left after churning out butter from milk; typically, cow’s milk. It is thicker than milk and leaves a more visible residue on the glass. Also, it has two different types based on the method of production:

The manufacturing procedure is often lactic acid fermentation of cow’s milk. It causes the thickening of the milk as well as the sour or acidic taste. The thickening is due to the denaturation of milk proteins while the sour taste is due to the produced lactic acid. Two species of bacteria used in the fermentation of milk are Streptococcus lactis or Lactobacillus bulgaricus. 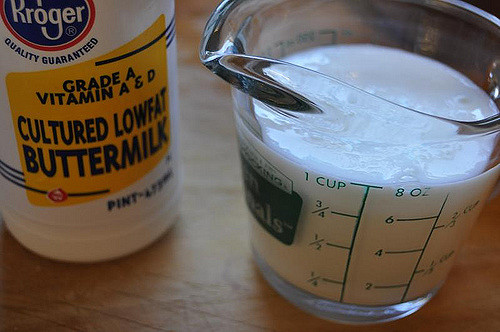 The acidity of buttermilk has its own benefits in the baking industry. Used in combination with the alkaline baking soda, it gives lightness and tenderness to baked products. Further, it has various health benefits as well. The presence of probiotics in it prevents the growth of pathogenic, gastrointestinal microorganisms. It also reduces the discomfort in the gastrointestinal tract and strengthens the immune system. Moreover, it contains a fewer amount of lactose and is better for individuals with lactose intolerance. Its use is common in countries with warm climates such as the Middle East, Nepal, India, Pakistan, Southern United States, etc.

Milk refers to an opaque, white fluid rich in fat and protein, secreted by mammary glands for the nourishment of their young. It may also refer to the white-colored beverages that are non-animal such as coconut milk, soy milk, rice milk, almond milk, etc. Generally, milk is a great source of nutrition for humans as well as animals. Though the proportions are variable among sources, the main components of it are protein, calcium, saturated fat, and Vitamin C. Human milk contains 60% of whey and 40% of casein. Cow’s milk contains 20% of whey and 80% of casein. Whey is a mixture of beta-lactoglobulin (65%), alpha-lactalbumin (25%), bovine serum albumin (8%), and immunoglobulins. 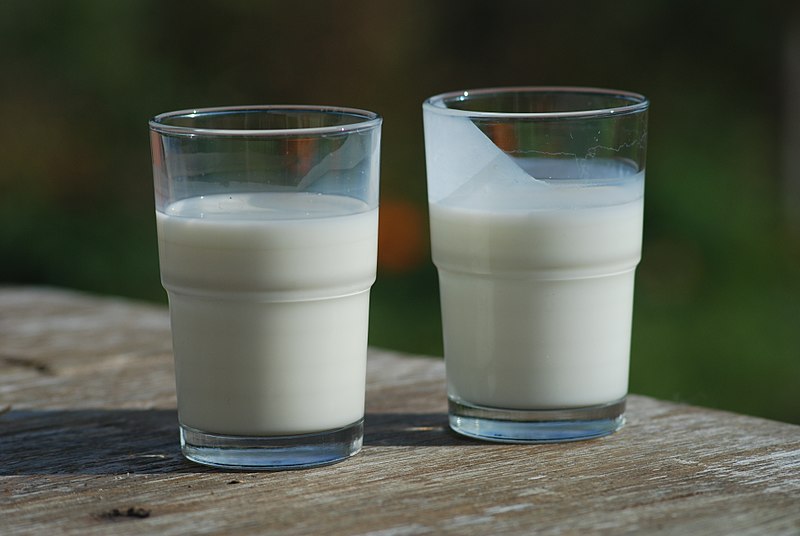 Similarities Between Buttermilk and Milk

Difference Between Buttermilk and Milk

Buttermilk: Slightly sour liquid left after butter has been churned

Milk: Opaque, white fluid rich in fat and protein, secreted by mammary glands for the nourishment of their young

Milk: Can have animal or plant origin

Buttermilk: Curdled by the addition of lactic acid bacteria to the low-fat milk

Milk: Product of the mammary glands

Buttermilk is the fermented form of cow’s milk, which is a bit sour in taste. Generally, milk is the product of mammary glands, which is creamy and sweet. Both contain probiotics. Buttermilk contains a fewer amount of fat than milk. The main difference between buttermilk and milk is mainly in their taste.