What is a Cell Membrane

The structure of the membrane is described by the fluid mosaic model. Cell membrane consists of a lipid bilayer with embedded proteins in it. The lipid bilayer is considered as a two-dimensional liquid, where the lipid and protein molecules are diffused more or less easily in it. It is formed during self-assembly of lipid molecules. These lipids are amphipathic phospholipids. Their hydrophobic “tail” regions are hidden from the surrounding water or the hydrophilic environment by the bilayer structure. Thus, hydrophilic heads interact with either intracellular/cytosolic or extracellular faces. By this, a continuous, spherical lipid bilayer is formed. Therefore, hydrophobic interactions are considered as major driving forces for the lipid bilayer formation.

Lipid bilayer structure prevents the entry of polar solutes into the cell. But, passive diffusion of non-polar molecules is allowed. Therefore, transmembrane proteins function either as pores, channels or gates for the diffusion of the polar solutes. Phosphatidyl serine is concentrated on the membrane, in order to create an extra barrier to charged molecules.

Membrane structures like podosome, caveola, focal adhesion, invadopodium and different types of cell junctions are present in the membrane. These are called “supramembrane” structures which allow communication, cell adhesion, exocytosis and endocytosis. Underlying the cell membrane, the cytoskeleton is found in the cytoplasm. Cytoskeleton provides a scaffolding to anchor the membrane proteins. A detailed diagram of the cell membrane is shown in figure 1.

Figure 1: A detailed diagram of the cell membrane

Cell membrane is mostly composed of lipids and proteins. Three classes of amphipathic lipids can be found in the cell membrane: phospholipids, glycolipids and sterols. Phospholipids are the most abundant type of lipids among them. Cholesterol is found dispersed throughout the membrane in animal cells.

Cell membrane is selectively permeable, regulating a constant internal environment for the functioning of the cell. The movement across the cell membrane can occur either in passive or active diffusion. Four transport mechanisms can be identified in the cell membrane. Small molecules like carbon dioxide, oxygen and ions move across the membrane by passive osmosis and diffusion. Nutrients like sugar, amino acids and metabolites move across passively, through transmembrane protein channels. Aquaporins are a kind of protein channels which transport water by facilitated diffusion. Absorption of molecules into the cell by engulfing them is referred to as the endocytosis. Solid particles are engulfed by phagocytosis and small molecules and ions are engulfed by pinocytosis. Some undigested residues are removed from the cell by invagination and formation of a vesicle. This process is referred to as the exocytosis.

What is a Cell Wall

The cell wall is a rigid, outermost, structural layer found in bacterial, archeal, fungal and plant cells. Structural support and the protection is provided by the cell wall. It also acts as a pressure vessel which prevents the over-expansion of the cell. Structure and composition varies between species.

Structure and Composition of Cell Wall 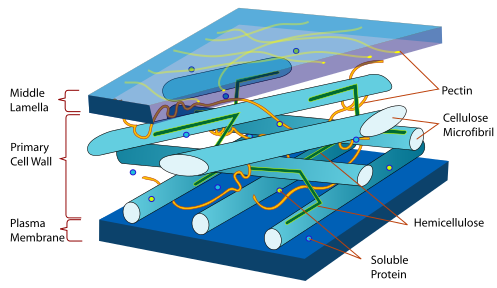 Cell Membrane: Cell membrane is a universal feature of all living cells.

Cell Wall: The cell wall is present in bacteria, archaea, fungi and plant cells and absent in animal cells.

Cell Membrane: Cell membrane can be observed under electron microscope.

Cell Wall: Cell wall can be observed under the light microscope.

Cell Membrane: Cell membrane functions as protective covering to the protoplasm and maintains a constant environment in protoplasm.

Cell Wall: Cell wall functions as a protective covering to the cell membrane and maintains the shape of the cell.

Shape of the Cell

Cell Membrane: Cell membrane provides a round, flexible shape to the cell.

Cell Membrane: Cell membrane is made up of lipids, proteins and carbohydrates.

Cell Wall: Cell wall is made up of peptidoglycan in bacteria, chitin in fungi and cellulose in plants.

Cell Wall: Cell wall is non-living and it is metabolically inactive.

Cell Membrane: Receptors on the cell membrane allow the cell to receive signals from the external environments.

Cell Membrane: Cell membrane gives rise to flagella and pili which help the movement and attachment of the cell, respectively.

Cell Membrane: Cell membrane requires nutrition from the cell and it shrinks during drought conditions.

Cell Wall: Since the cell wall is a mere deposit of substances, it requires no nutrition from the cell.