The main difference between dopamine and endorphins is that brain releases dopamine as a major role in the motivational component of reward-motivated behaviour whereas endorphins serve as natural morphine of the body, triggering in response to physical pain. Furthermore, dopamine is a neurotransmitter of the catecholamine family while endorphins are opioid neuropeptides. In addition, dopamine acts on the brain while endorphins act on both central and peripheral nervous systems.

Dopamine and endorphins are two types of chemical messengers that also act as hormones. Moreover, they are two of the four chemicals responsible for happiness – the other two being serotonin and oxytocin. 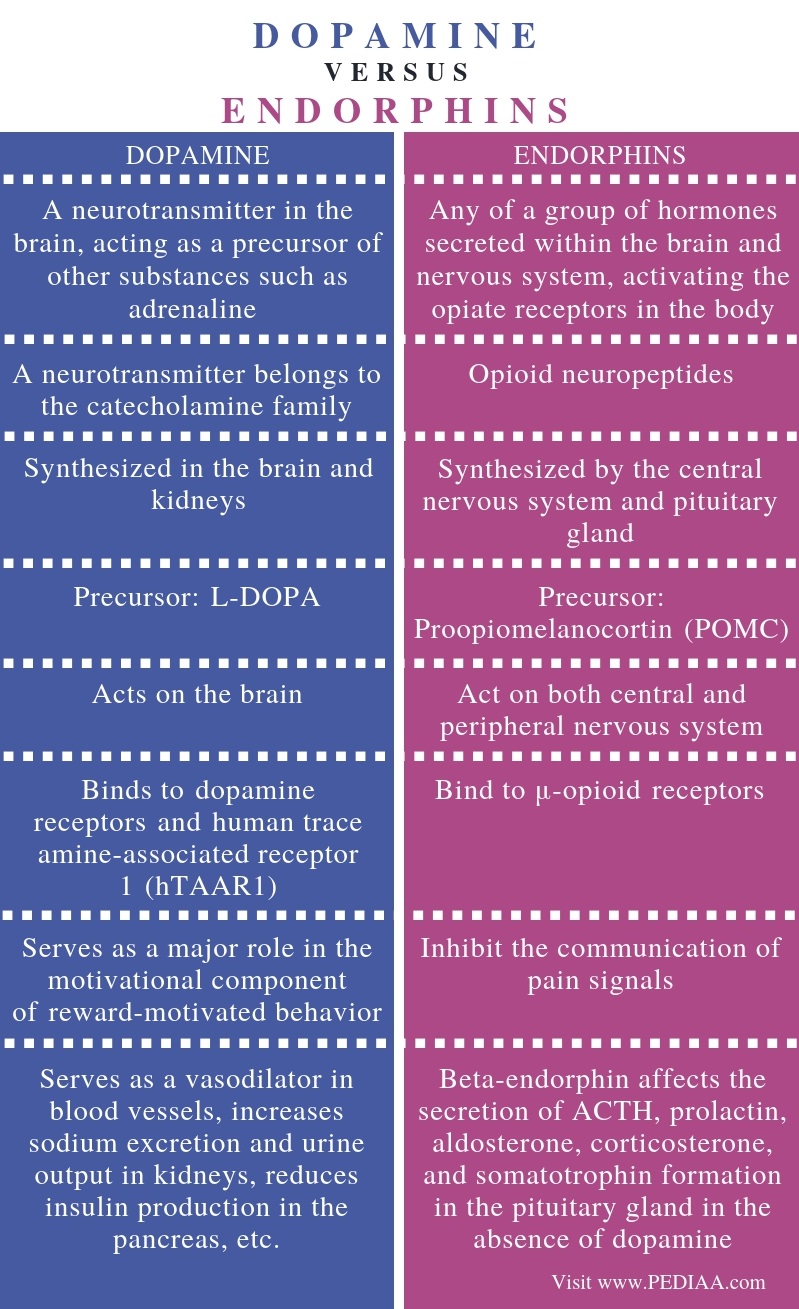 Dopamine is a neurotransmitter of the catecholamine family, acting on the brain. Both brain and kidney synthesize dopamine by using L-DOPA as the precursor. However, even other animals and plants synthesize dopamine in addition to humans. Moreover, dopamine levels increase in the brain in response to many types of rewards in the brain. Generally, the brain only releases dopamine when an important goal is within reach. Otherwise, this neurotransmitter may deplete the energy reserves of the body.

Furthermore, outside the nervous system, dopamine performs several functions vital to the functioning of the body. Basically, it serves as a vasodilator by inhibiting the release of norepinephrine. It also increases sodium excretion and urine output in kidneys. It can also reduce gastrointestinal motility. Moreover, dopamine reduces insulin production by the pancreas. Furthermore, impairments of dopamine production in the brain cause several disease conditions. Here, the reduction of dopamine-producing neurons in the substantia nigra of the midbrain results in Parkinson’s disease. Moreover, altered levels of dopamine cause schizophrenia.

Endorphins are endogenous opioid neuropeptides produced by the central and the pituitary gland of humans and other animals. Moreover, they are morphine-like substances, relieving physical pain. Thus, the main function of endorphins is to inhibit the transmission of nerve signals of pain. Generally, the three classes of endorphins include alpha-endorphins, beta-endorphins, and gamma-endorphins. The original precursor protein of these endorphins is proopiomelanocortin (POMC), fragmented into beta-lipotropin (β-LPH), giving rise to the three different forms of endorphins.

Similarities Between Dopamine and Endorphins

Difference Between Dopamine and Endorphins

Dopamine refers to a neurotransmitter in the brain, acting as a precursor of other substances such as adrenaline, while endorphins refer to any of a group of hormones secreted within the brain and nervous system, activating the opiate receptors in the body.

While dopamine is a neurotransmitter that belongs to the catecholamine family, endorphins are opioid neuropeptides.

Moreover, dopamine is synthesized in the brain and kidneys while endorphins are synthesized by the central nervous system and pituitary gland.

Furthermore, dopamine acts on the brain while endorphins act on both central and peripheral nervous systems.

Furthermore, dopamine serves as a vasodilator in blood vessels, increases sodium excretion and urine output in kidneys, reduces insulin production in the pancreas, etc. while beta-endorphin affects the secretion of ACTH, prolactin, aldosterone, corticosterone, and somatotrophin formation in the pituitary gland in the absence of dopamine.

Dopamine is one of the four neurotransmitters responsible for happiness. Generally, it acts on the brain in response to reward-motivated behaviour. It also serves as a vasodilator outside the nervous system while performing several other important functions. On the other hand, endorphins are another group of chemicals responsible for happiness. However, they act on both the central and peripheral nervous system. Moreover, they act like natural morphine in the body, reducing pain. Therefore, the main difference between dopamine and endorphins is type and function.