According to the theory of psychoanalysis, which was introduced by Sigmund Freud, who is considered the father of psychology, the human mind is divided into three different sections called “id,” the “ego,” and the “superego.” The unconscious state or ‘id’ is defined as humanity’s most primitive desires which act on satisfying individual biological needs whereas ‘superego’ involves the socially-induced conscience which counteracts id in the aspects of moral and ethical prohibitions. Additionally, the largely conscious ‘ego’ is known to be acting as a mediator between id ego and superego. Ego can be simply defined as common sense and superego can be defined as the conscience. This is the main difference between Ego and Superego.

In this article, we are going cover,

1. What is Ego – Definition, Concept, and Characteristics

2. What is Superego – Definition, Concept, and Characteristics

3. What is the difference between Ego and Superego 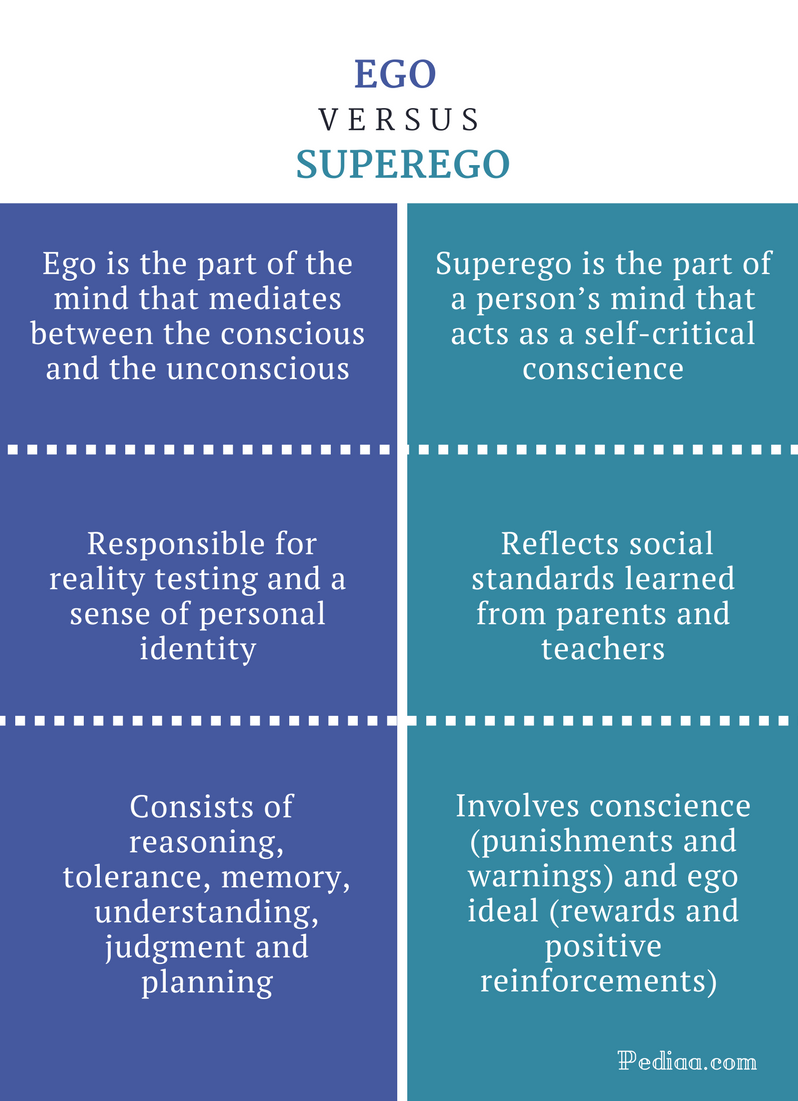 Ego means ‘I’ in Latin and the original German word, applied by Freud is known to be ‘Ich.’ Ego is defined as a sense of self and a set of psychological functions like reality-testing, defense, synthesis of information and memory. Freud’s theory of psychoanalysis explains ego as a concept which mediates between the id (unconscious state), the superego (conscious state) and the external world in order to maintain a balance between most primitive drives, moral ideals, and taboos with some limitations of reality. More importantly, ego should successfully interact with the above aspects and fulfill the fundamental function of adaptation, enforce the postponement of gratification of the drives and impulses of the id, until a time in which the targeted  situation alters in a significant manner or a socially acceptable way to satisfy the drive is identified.

Id, which often involves the driving power of demanding satisfaction, is usually unacceptable to the superego and therefore the concept of ego has a huge responsibility in mediating these drives in order to implement appropriate or acceptable conditions. As a result of the constant struggle with impulses generated by id, the ego often tends to develop several defense mechanisms including repression, reaction formation, projection, regression, denial, rationalization, and sublimation.

These mechanisms are used when a certain internal drive is identified to threaten someone’s inner personality, create anxiety or build up dangerous situations which are usually original, unacceptable impulses, finding it hard to resurface.

In a summary, this concept of ‘huge consciousness’ or ego strongly stands between variable swings of id and superego, thus balancing an individual’s primitive needs and moral beliefs.

Additionally, a healthy ego enhances the capacity of an individual to adapt to reality and interact with the outside world in a way which maintains a positive balance between other two sections of the human mind, explained by Freud as Id and Superego. 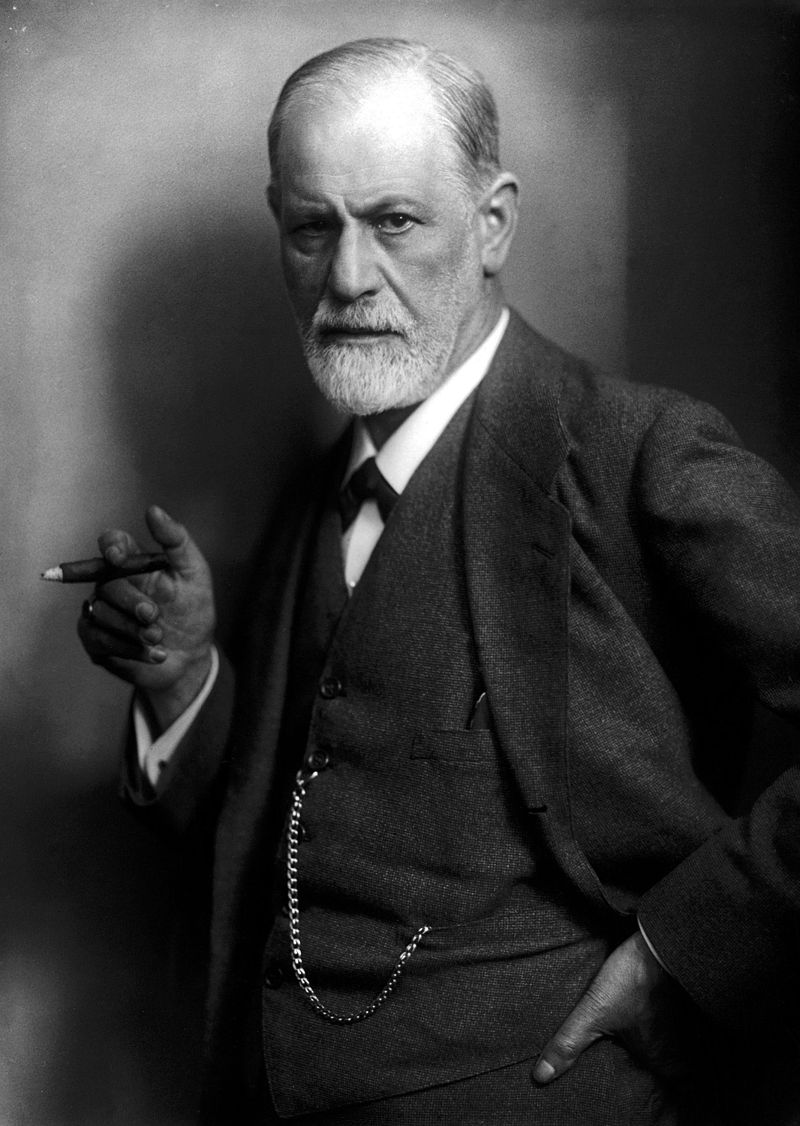 This is defined as a socially-induced conscience which counteracts the id, mainly in the aspects of moral and ethical thoughts. Some religious people have put forward the argument that superego is the part of a human in which God dwells. It is also described as a concept of “above-ego” of the mind.

This section of mind often stands in opposition to the desires, drives, fantasies, etc. generated by id. Superego urges an individual to postpone gratification of these desires until some realistic conditions are met.So basically, superego is identified as a part of human mind which sums up all the norms and prohibitions in a nutshell.

As far as the theoretical part is concerned, superego mainly involves conscience (punishments and warnings) and ego ideal (rewards and positive reinforcements) which function as positives and negatives in two different ends.

Superego of an individual is developed eventually since childhood, mainly depending on the internalization of the world view, norms, parental factors, and environment.

Interestingly, the particular individual will tend to feel guilt or shame if the requirements of this superego are not followed.

Freud has also put forward an important concept about a special inner power or an instinctual drive which is a part of the unconscious mind called the Oedipal Conflict against which superego arises. According to this explanation, feelings of guilt can spontaneously occur without any conscious fault. 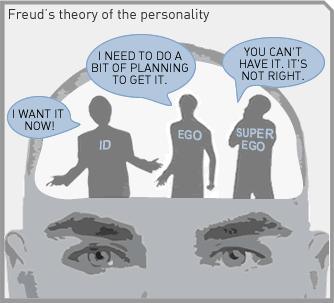 Difference Between Ego and Superego

Although, both these terms are components of the human psyche, they act in different ways which are very important to be identified in order to explain the basic build-up of an individual’s personality.

Ego is the common sense which is defined as an individual’s reaction to his needs and consists of well-organized sections including reasoning, tolerance, memory, understanding, judgment and planning.

Superego is defined as conscience, where an inner voice is constantly reminding the individual to be good. This helps a person to become perfect following his beliefs and norms in life associated with ethics and spiritual values.

Ego is thought to be more related to id or unconsciousness. For example, suppose an over-weight girl is highly passionate about chocolates. Knowing that this is sinful or inappropriate, most of the actions, related to chocolates like craving, watching, tempting and eating will make her feel guilty, anxious and inferior. This is exactly where superego comes to the drama of psyche.

Superego acts like your own critic, and either encourages you or blames you.

Basically, it takes away an individual’s thoughts from mere self-gratification and leads him towards the most acceptable pathway, ultimately making him stand in the society, as a faultless citizen.