In brief, psychology is the scientific study of human mind and its functions, especially those affecting behaviour in a given context. Similarly, all humans have a defence mechanism that allows us to avoid the negative impact of the negative stimuli we encounter. Repression and suppression are two such psychological defence mechanisms that most people use interchangeably without having a proper awareness about their distinctive natures. 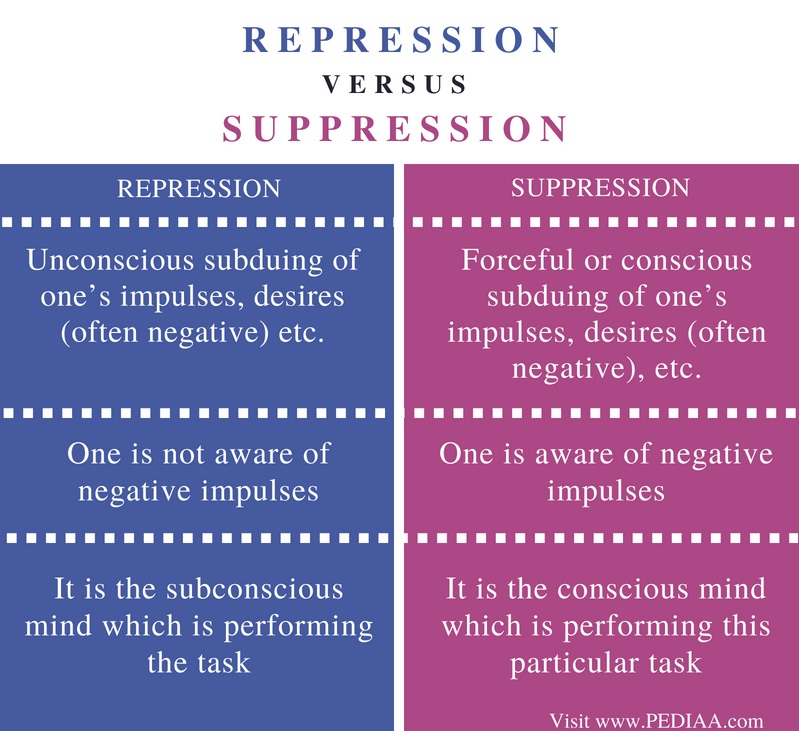 Repression can be defined as the ‘subconscious defense mechanism to direct one’s own desires and impulses towards pleasurable instincts by excluding them from one’s consciousness and holding or subduing them in the unconscious’. Therefore, repression happens unconsciously or without any force like suppression. In other words, it is our subconscious mind which avoids or suppresses these negative or unpleasant impulses from coming to the surface; as a result, we are not even aware of the existence of such impulses within ourselves.

Sigmund Feud, who is considered the father of Psychology, first discovered this. According to him, repression is used by humans as a way of a self-defense mechanism, and he referred to this mechanism as “the corner-stone on which the whole structure of psychoanalysis rests’.

A person having no recollection of being the victim of sexual abuse in his/her childhood is a commons place example of repression. Therefore, it is these traumatic memories that our subconscious pushes away so that we do not feel that agony and pain associated with it.

However, repression can have negative effects on one’s mental well-being since the person himself is not aware of what or why such impulses are denied, and the repercussions of them are affecting the person. Therefore, without having proper control over this phenomenon, the person will eventually become a victim of some mental problem without his awareness. As a result, the belief is that the repression plays a role in the psyche of the average person and can lead to mental illnesses.

For example, in relation to the above example, this victim will eventually find it hard to trust people and even start a relationship with another. He or she may not find the reason why it is difficult for it.

Accordingly, as Freud defines, abnormal repression or neurotic behaviour occurs when repression develops under the influence of the superego and the internalised feelings of anxiety, in ways leading to behavior that is illogical, self-destructive, or anti-social. In other words, repression becomes a trigger for the rise of anxiety and therefore, to neurotic symptoms, which happens when a forbidden drive or impulse threatens to enter the conscious mind, and the subconscious mind is consistently driving it away, resulting in other behavioral side-effects.

Suppression is a useful psychological defense mechanism; here we force the negative impulses out of our awareness by controlling them and eventually not allowing them to have any effect on us. Therefore, suppression means the act of consciously suppressing our impulses, feelings, memories, desires etc. and eventually making them not have any impact on our behaviour. In simple terms, suppression means the conscious avoidance of negative impulses.

The reasons why this is done may be either the impulse is inappropriate and wrong, or there may be time constraints at play. However, these suppressed impulses have a higher tendency of coming into the surface again. Therefore, we are aware that these suppressed impulses will come to the surface again some other time, and then we will resume the activity of subduing them again.

A common example of suppression is when someone is depressed about the bad exam results he/she got, but he or she attends a party of a friend. During the party, he/she will try to forget or suppress that disturbing and troubled thought of having bad results and will try to enjoy his/herself for the moment thinking ‘I should forget about it now without ruining the fun of others around me as well’. Here during suppression, he/she will feel angry or disappointed about not doing well at the exam but will try best to hinder that impulse and enjoy the present moment. Evidently, suppression is helpful for humans to move on, ponder on the mistakes and take a better step on the next go.

Similarity Between Repression and Suppression

Difference Between Repression and Suppression

In suppression, one is aware of negative impulses, whereas, in repression, one might not even be aware of the same. Therefore, repression may become a major cause of several mental problems in people since this phenomenon happens even without their awareness.

As a human being, we consistently and continuously face both negative and positive stimuli. Consequently, the intensity of the negative stimuli we face can affect our mental health directly. In order to avoid this, we have certain defense mechanisms; repression and suppression are two such defense mechanisms in us. However, there is a difference between repression and suppression as well. Repression refers to the unconscious subduing of thoughts, memories etc. while suppression refers to forcefully or consciously subduing certain desire or painful memories etc. in a person.