Fe2O3 and Fe3O4 are two common oxides of iron that can be found naturally along with some impurities. Fe2O3 is also known as hematite, a mineral from which pure Fe2O3 can be obtained via processing and Fe3O4 is known as magnetite for the same reason. These minerals are the feedstock for pure metal iron production. There are many physical and structural difference between Fe2O3 and Fe3O4. The main difference between Fe2O3 and Fe3O4 is that Fe2O3 is a paramagnetic mineral having only Fe2+ oxidation state whereas Fe3O4 is a ferromagnetic material having both Fe2+ and Fe3+ oxidation states. 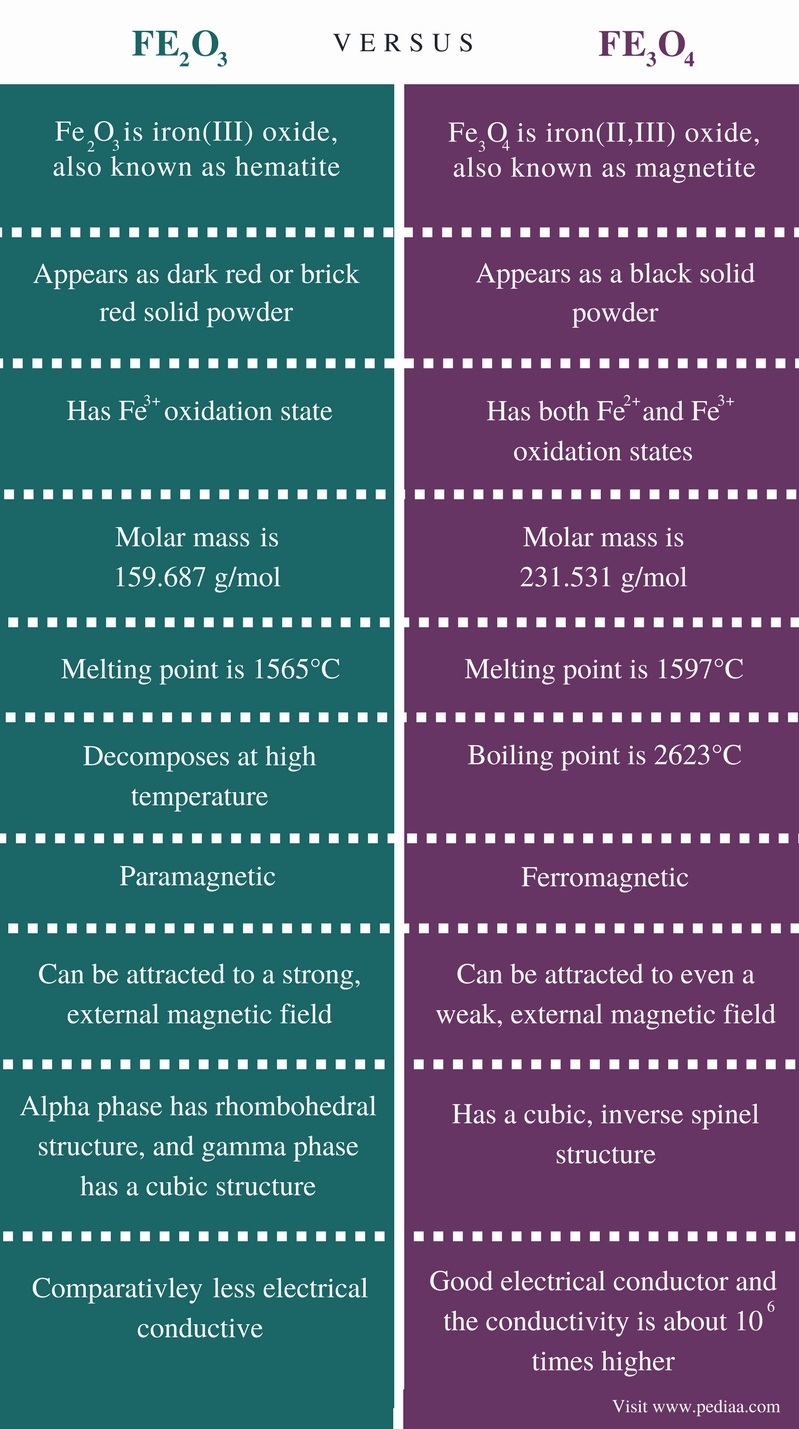 Fe2O3 is iron(III) oxide. It is an inorganic compound (one of the three major iron oxides). Fe2O3 is found in nature as the mineral hematite. Hematite is the major source of iron for the steel industry. Fe2O3 appears as a dark red (brick red) colored solid which is odorless. Fe2O3 is paramagnetic. This means it can be attracted to a strong, external magnetic field. This compound is readily attacked by acids. An alternative name for Fe2O3 is “rust”. 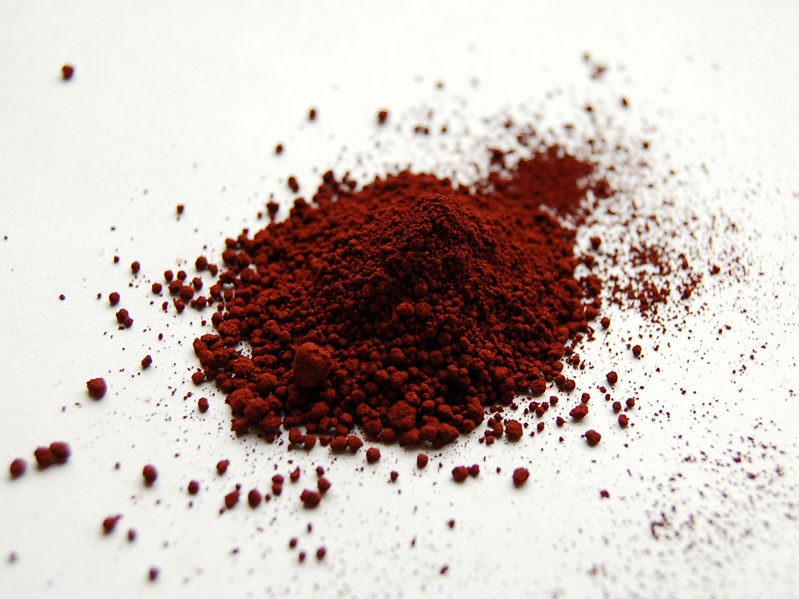 The molar mass of Fe2O3 is 159.687 g/mol. The melting point of this compound is 1565oC; at higher temperatures, it usually decomposes. Fe2O3 is readily soluble in acids and sugar solutions. It is insoluble in water.

The major application of Fe2O3 is in iron production. There, Fe2O3 is used as the feedstock for the blast furnace (In which iron is produced in the form of molten iron). In addition, very fine particles of Fe2O3, known as rouge in common, is used in polishing jewelry to get the final finishing of the product.

Fe3O4 is iron(II,III) oxide. It is named as such since it contains both Fe2+ and Fe3+ ions. This makes Fe3O4 ferromagnetic. This means Fe3O4 can be attracted to even a weak, external magnetic field. The mineralogical name of Fe3O4 is magnetite. It is one of the major iron oxides found naturally on earth. 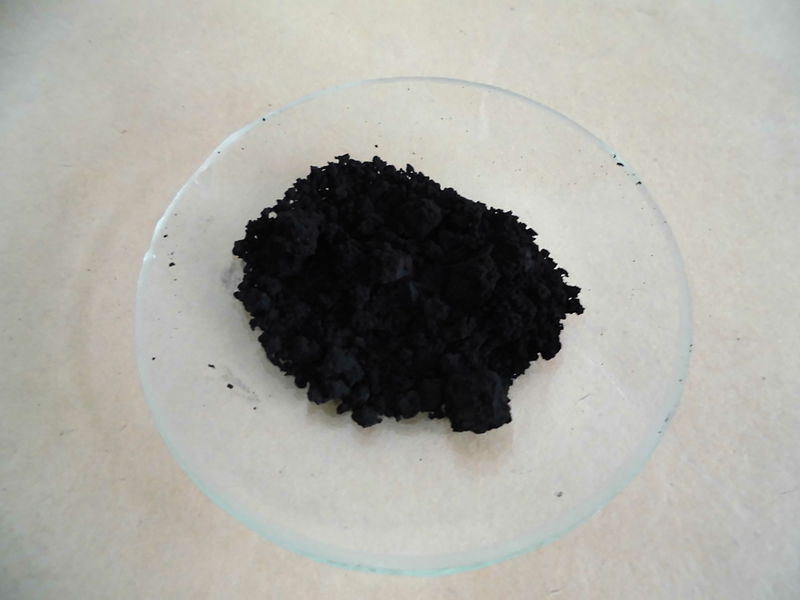 Fe3O4 has a dark (black) color. The molar mass of Fe3O4 is 231.531 g/mol. The melting point of this compound is 1597oC, and the boiling point is 2623oC. At room temperature, it is a solid black powder which is odorless. When considering the crystal system of Fe3O4, it has a cubic, inverse spinel structure.

Fe3O4 is a good electrical conductor (the conductivity is about 106 times higher than that of Fe2O3). When properly induced, Fe3O4 particles can act like tiny magnets. This compound is used as a black pigment and is known as Mars black. It is used as a catalyst in Haber process (for the production of ammonia). Nano- Fe3O4 particles are used in MRI scanning (as contrast agents).

Difference Between Fe2O3 and Fe3O4

Attraction Towards a Magnetic Field

Fe2O3: Fe2O3 can be attracted to a strong, external magnetic field.

Fe3O4: Fe3O4 can be attracted to even a weak, external magnetic field.

Fe2O3: Fe2O3 is less electrical conductive when compared to Fe3O4.

Fe3O4: Fe3O4 is a good electrical conductor, and the conductivity is about 106 times higher than that of Fe2O3.

Hematite and magnetite are the major sources of iron in industrial metal iron production processes. These mineral are used as the feedstock for this production. Hematite mainly contains iron in the form of Fe2O3 whereas magnetite contains iron in the form of Fe3O4. These compounds are the major oxides of irons that can be found in nature. The main difference between Fe2O3 and Fe3O4 is that Fe2O3 is a paramagnetic mineral having only Fe2+ oxidation state whereas Fe3O4 is a ferromagnetic material having both Fe2+ and Fe3+ oxidation states.