Fibrin and fibrinogen are two protein components that play a vital role in blood clotting, fibrinolysis, inflammatory responses, wound healing, and neoplasia. The above functions are regulated by various interactive sites on both types of molecules. Fibrinogen is converted into fibrin by thrombin, a clotting factor. The main difference between fibrin and fibrinogen is that fibrin is a thread of proteins that forms the mesh during the formation of blood clot whereas fibrinogen is a plasma protein involved in the formation of fibrin. The three types of pathways involved in the formation of a blood clot are intrinsic pathway, extrinsic pathway, and common pathway. 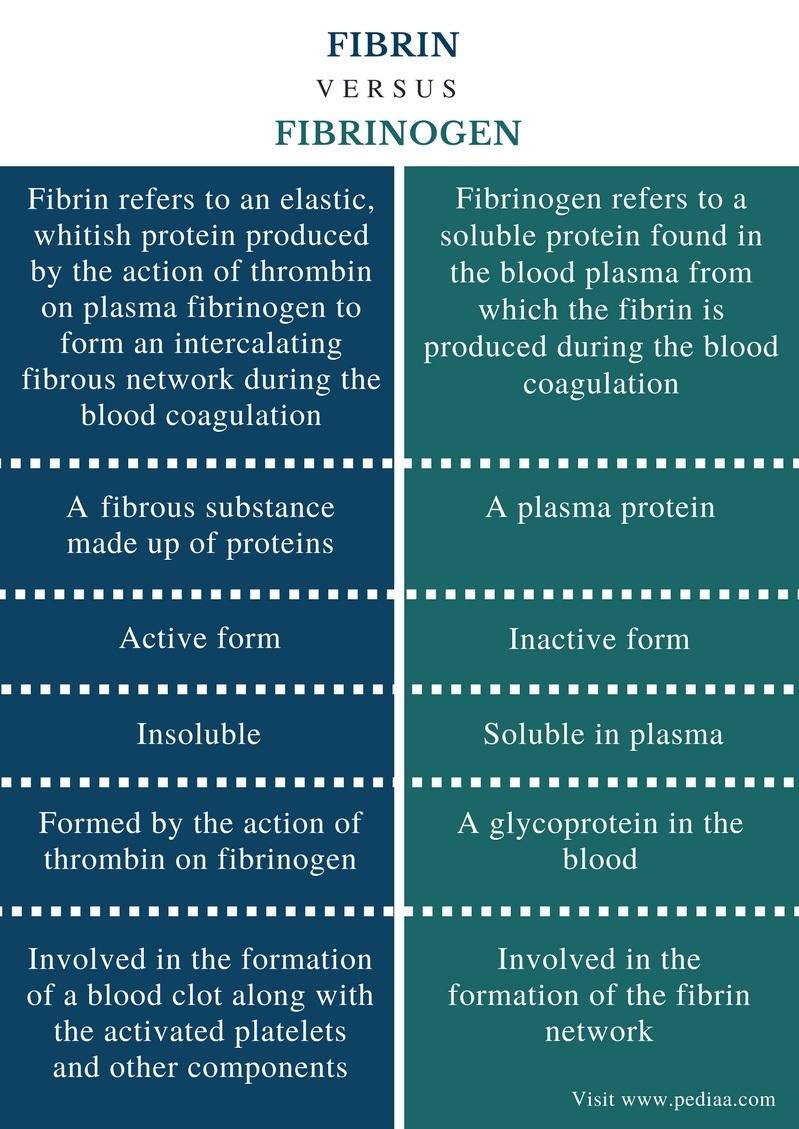 Fibrin refers to an elastic, whitish protein produced by the action of thrombin on plasma fibrinogen to form an intercalating fibrous network during the blood coagulation. Fibrinogen is composed of two sets of Aα-, Bβ-, and γ-chains. The six chains are linked by di-sulfide bridges. Each fibrinogen molecules consist of two D domains connected to a central E domain through a coiled-coil segment. Both extrinsic and intrinsic pathways activate the clotting factors that convert the inactive prothrombin into thrombin. Thrombin converts fibrinogen into cross-linked fibrin. It cleaves the fibrinopeptide A (FPA) from Aα-chains of the fibrinogen molecule, initiating fibrin polymerization. The association of the D and E domains forms double-stranded fibrils. The later lateral association and branching of fibrils form the network of fibrin. The antiparallel, C-terminal assembly of intermolecular γ-chains form covalent cross-links under the influence of a clotting factor XIII or XIIIa, forming γ-dimers. The formation of cross-linked γ-dimers is shown in figure 1. 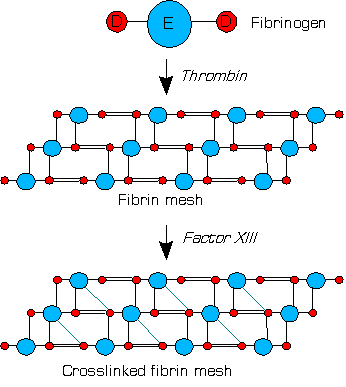 Fibrinogen refers to a soluble protein found in the blood plasma from which fibrin is produced during the blood coagulation. It possesses an elongated structure and is 45 nm long. The Aα-chain, Bβ-chain and γ-chain consist of 610, 461, 411 residues respectively. The cleavage of the N-terminal FPA sequence by thrombin induces the polymerization of fibrin. The crystal structure of native chicken fibrinogen is shown in figure 2.

The main function of fibrinogen is to be circulated throughout the body within the plasma and activated by thrombin to form fibrin.

Similarities Between Fibrin and Fibrinogen

Difference Between Fibrin and Fibrinogen

Fibrin: Fibrin refers to an elastic, whitish protein produced by the action of thrombin on plasma fibrinogen to form an intercalating fibrous network during the blood coagulation.

Fibrinogen: Fibrinogen refers to a soluble protein found in the blood plasma from which the fibrin is produced during the blood coagulation.

Fibrin: Fibrin is a fibrous substance made up of proteins.

Fibrinogen: Fibrinogen is a plasma protein.

Fibrin: Fibrin is the active form.

Fibrinogen: Fibrinogen is the inactive form.

Fibrinogen: Fibrinogen is soluble in the plasma.

Fibrin: Fibrin is formed by the action of thrombin on fibrinogen.

Fibrinogen: Fibrinogen is a glycoprotein in the blood.

Fibrin: Fibrin is involved in the formation of a blood clot along with the activated platelets and other components.

Fibrinogen: Fibrinogen is involved in the formation of the fibrin network.

Fibrin and fibrinogen are two types of protein components in the animal body, and they possess a vital role in the blood coagulation. Fibrin is the thread-like protein formed by the polymerization of fibrinogen by the action of thrombin. It forms a network to trap activated platelets and other components for the formation of a blood clot. Fibrinogen is a plasma protein. The main difference between fibrin and fibrinogen is the structure and function of each protein component.