Formaldehyde is the simplest aldehyde with the chemical formula CH2O, and its IUPAC name is Methanal. Other than the IUPAC name, formaldehyde is also known as Formol, Formic aldehyde, Methaldehyde, Morbicid, Paraform, Methylene oxide, Oxymethylene, Oxomethane, etc. Its boiling point is -19.5 oC. Therefore, it exists as a colorless gas at room temperature with a pungent odor. This gas appears in the environment as a result of natural processes or man-made sources, such as photochemical oxidation and incomplete combustion of hydrocarbons. Formaldehyde has trigonal planar structure, and it belongs to C2v point group. The Figure 1. and 2. Illustrate the structure and hybridization of the bonds in formaldehyde.

Formaldehyde is very soluble in water and organic solvents like ether, acetone, benzene, and alcohol. Apart from solubility, it reacts rapidly with perchloric acid, aniline, performic acid, nitromethane magnesium carbonate, and hydrogen peroxide. Formaldehyde has acute effects on mammals, and inhalation of their high concentration causes hypersalivation, acute dyspnea, vomiting, muscular spasms, convulsions and finally deaths. Since this is a highly reactive gas, it can be easily absorbed at the point of contact. Even though it is weakly genotoxic, it has the ability to induce gene mutations in mammalian cells. However, formaldehyde is easily subject to photodegradation and biodegradation, which produces carbon dioxide and water.

In order to prevent polymerization, methanol is added to formalin.

Formalin is a colorless liquid. It has a sharp irritating smell due to off-gassing of formaldehyde. This solution has a neutral PH value, but it can act as a reducing agent to reduce other substance while producing formic acid. Strong formalin solutions are flammable. This solution can be used as disinfectants and germicides, as they can destroy harmful microorganisms. Other than that, they have a dehydrating effect, preservation ability and also it can combine with proteins, inactivating them and killing cells. Because of these properties, formalin is commonly used in aquariums to kill parasites that live on fish. Here, a diluted solution of formalin is used to avoid causing harm to the fish.

Difference Between Formalin and Formaldehyde

Formaldehyde: Pure formaldehyde (Has only one component)

Formalin: Formalin can be used as disinfectants and germicides. Also, it is widely used for preserving tissue samples while preventing cell decay. 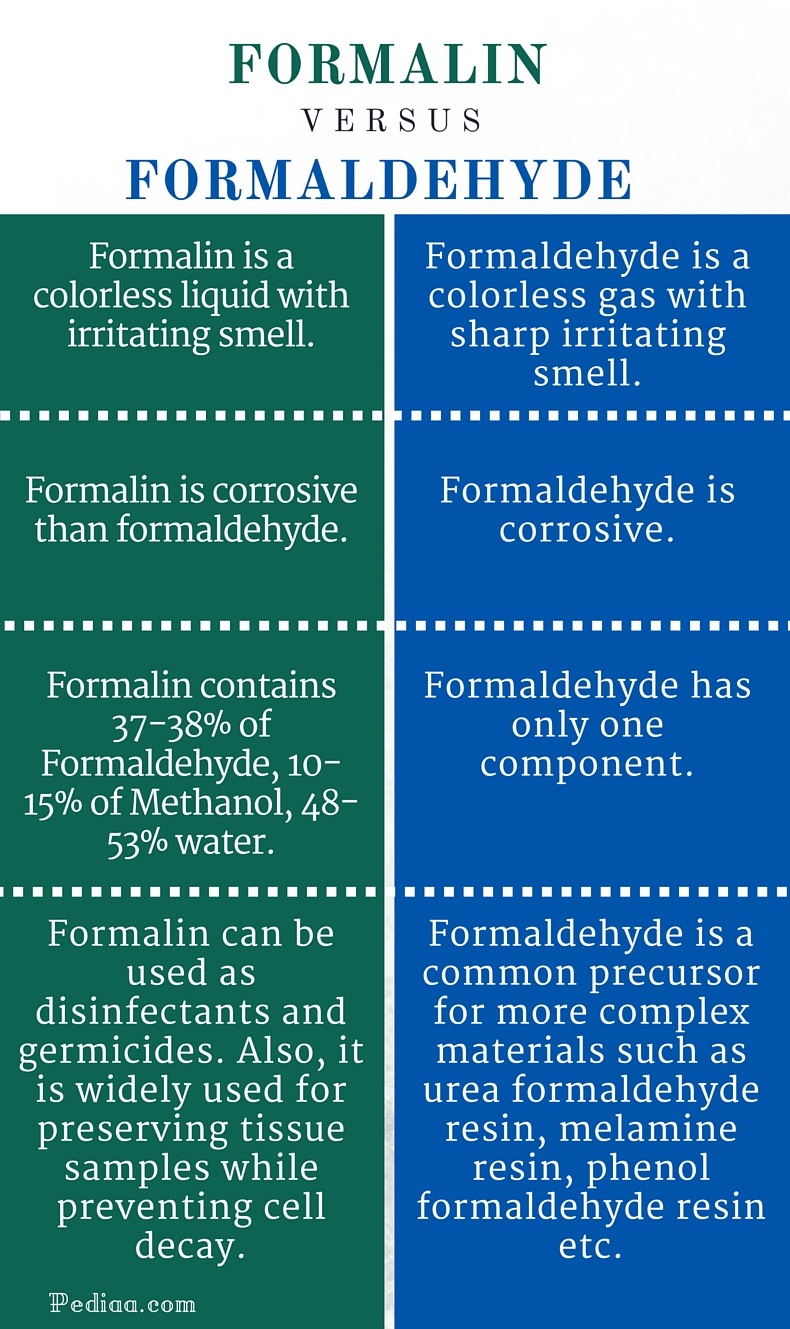