Some diseases are caused by certain abnormalities in the structure of DNA which can either get transferred from one generation to another or halt at the affected individual then and there. This is the basic idea on which genetic and hereditary aspects of a disease is discussed on and many people use these terms interchangeably due to their common features, which are not very easy to differentiate from one another. The main difference between Genetic and Hereditary Diseases is that genetic disease is a condition which occurs due to an abnormality in the individual’s genome while a hereditary disease is a condition caused by a mutation of a gene which can be characteristically transmitted from one generation to another.

1. What is a Genetic Disease?
– Definition, Types, Examples

2. What is a Hereditary Disease?
– Definition, Types, Examples

3. What is the difference between Genetic and Hereditary Diseases?

What is a Genetic Disease

A Genetic disease is defined as a condition which occurs due to an abnormality in the individual’s genome. There are various patterns of genetic inheritance in common diseases we often encounter in day to day life including

Due to changes or mutations in the DNA sequence of a single gene under autosomal dominant, autosomal recessive and X-linked forms. Accounting for more than 6000 diseases of this type, single gene inherited disorders are known to take place in about 1 in 200 births.

Caused by a combination of environmental factors and multiple gene mutations.

Caused by abnormalities in chromosome number or structure.

Caused by mutations in the non-chromosomal DNA of mitochondria.

Genetics diseases do not necessarily pass from one generation to another unless there is a hereditary transmittable potential in it. 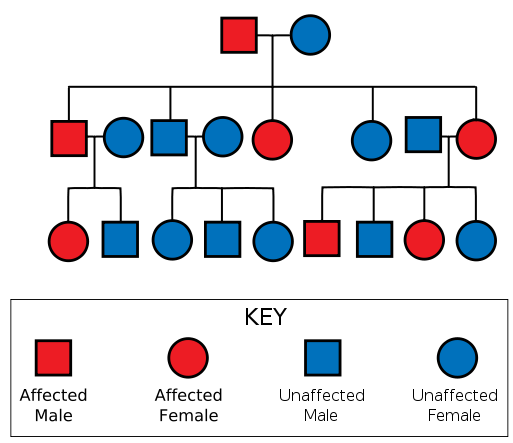 What is a Hereditary Disease

This is defined as any health condition, caused by a mutation of a gene which can be characteristically transmitted from one generation to another. In fact, conditions present in parents can also be seen in offsprings due to the capacity of feature transmission through defective genes.

One example of how the hemophilia gene is inherited

Difference Between Genetic and Hereditary Diseases

Genes are the materials present in our body which are responsible for transmitting traits from parents to offspring from one generation to another.

However, several spontaneous or induced gene mutations can result in defective or faulty genetic material, some of which will be acting as the basis for various types of inherited diseases, characteristically carrying these mutated changes from parents to offsprings.

The main difference between these two terms lies in the fact that hereditary diseases have the potential of being carried from one generation to another whereas a genetic disease can either be hereditary or not, but there will always be a mutational change in the genome.

“Autosomal Dominant Pedigree Chart2” By Jerome Walker – Derivative work of an image created by GAThrawn22, (CC BY 2.5) via Commons Wikimedia