Mosses and ferns are two types of primitive plants. Mosses belong to the phylum Bryophyta whereas ferns belong to the phylum Pteridophyta. Both mosses and ferns are non-flowering, seedless plants. Ferns are more developed plants than mosses. The main difference between mosses and ferns is that mosses are non-vascular plants whereas ferns are vascular plants. Furthermore, the plant body of ferns is differentiated into true leaves, stem, and roots. In contrast, the plant body of mosses consists of less differentiated leaflets. Mosses mostly grow in wet, shady environments. But, ferns are adapted to grow in dry environments as well. Mosses are few centimeters tall while ferns can grow higher than 4.5 m. 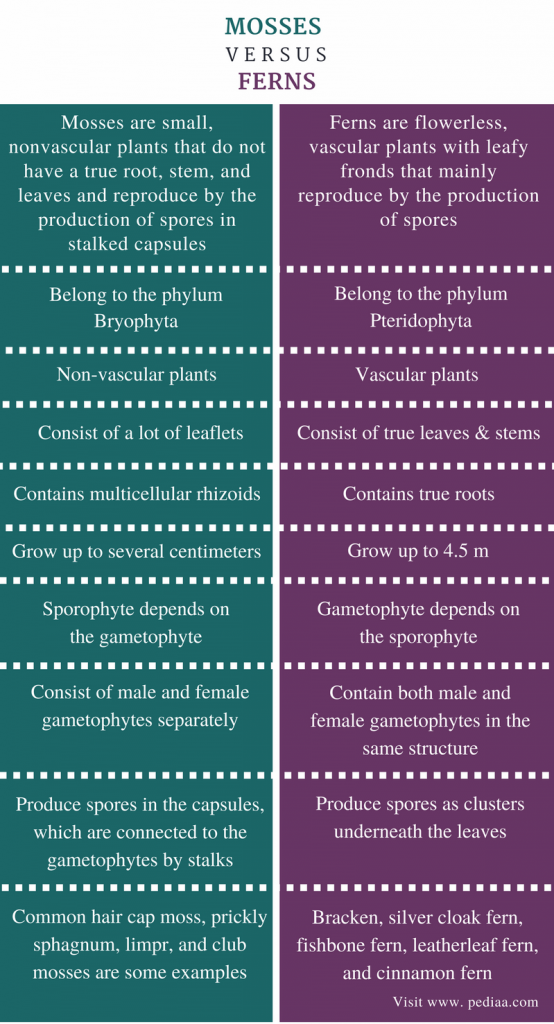 Mosses are a type of non-vascular plants that produce spores in capsules. They are classified under the plant phylum Bryophyta. Mosses are very similar to leafy liverworts. They undergo alterations of generations with a prominent gametophyte. The sporophyte appears on the gametophyte. The spores are produced in the capsule held by a stalk. The germination of spores produces a protonema, which is a filamentous structure. The protonema gives rise to one or more stems, which then develop into gametophytes. The gametophytes of the mosses are leafy-stemmed structures. Since the stems of mosses are weak, the plants are unable to grow for more than one centimeter. However, some mosses can grow up to 60 centimeters with free-standing stems. Some mosses contain highly branched stems. The leaf-like structures develop in a spiral arrangement along the stem. 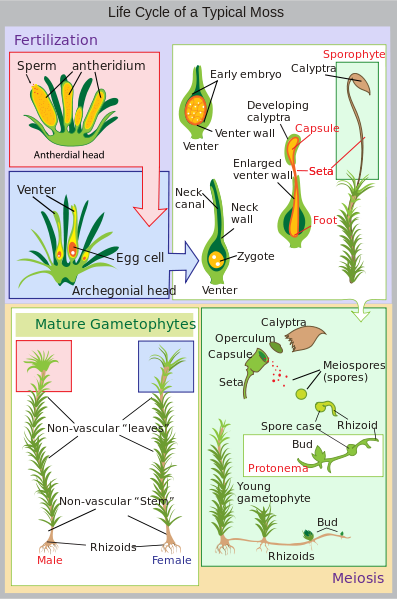 Figure 1: Lifecycle of a Moss

The mosses contain root-like structures called rhizoids. These rhizoids are multicellular and attach the plant to the substrate and absorb water from the soil. Mosses develop male and female gametophytes separately. The male gametes are produced in the antheridia whereas the female gametes are produced in the archegonia. The acrocarpous mosses produce archegonia at the tip of the main stem whereas the pleurocarpous mosses produce archegonia on side-shoots. The fertilized eggs on the female gametophyte produce the sporophyte. The typical life cycle of a moss is shown in figure 1.

Ferns are flowerless, vascular plants that mainly reproduce by the production of spores. They are classified under the plant phylum Pteridophyta. Ferns also undergo the alterations of generations. The sporophyte is prominent over the gametophyte in ferns. The sporophyte is differentiated into true leaves, stem, and root. The leaves of ferns are called fronds. The fronds consist of branched vein systems. That means ferns are vascular plants. The young leaves of the ferns are rolled. The size of ferns can vary from few millimeters to 10 to 25 meters. Some ferns are terrestrial, and others can be found floating on ponds. The spores of the ferns are produced underside of the fronds. 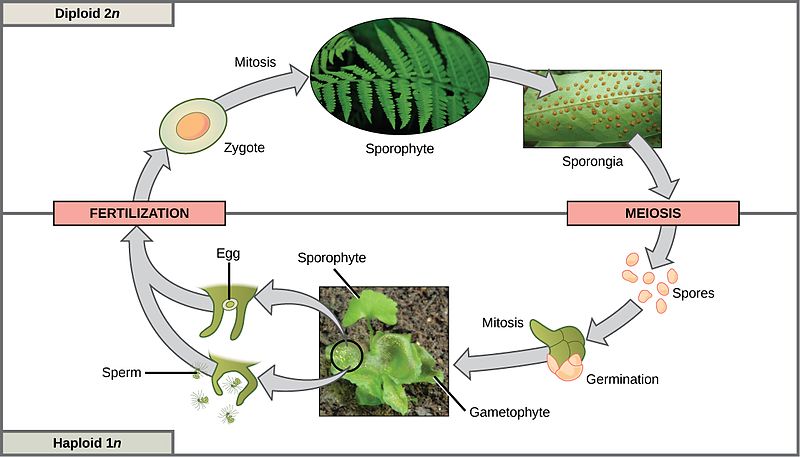 Figure 2: Lifecycle of a Fern

The germination of spores produces a heart-shaped gametophyte with both male and female gametophytes present in the same structure. This allows self-fertilization, which is more successful in dry conditions since the distance to travel by the sperm cells is less. The fertilization produces a new sporophyte on the gametophyte. The typical life cycle of a fern is shown in figure 2.

Similarities Between Mosses and Ferns

Difference Between Mosses and Ferns

Mosses: Mosses are small, nonvascular plants that do not have a true root, stem, and leaves and reproduce by the production of spores in stalked capsules.

Ferns: Ferns are flowerless, vascular plants with leafy fronds that mainly reproduce by the production of spores.

Mosses: Mosses consist of a lot of leaflets.

Mosses: In mosses, the sporophyte depends on the gametophyte.

Ferns: In ferns, the gametophyte depends on the sporophyte.

Ferns: Ferns contain both male and female gametophytes in the same structure.

Mosses: Mosses produce spores in the capsules, which are connected to the gametophytes by stalks.

Ferns: Ferns produce spores as clusters underneath the leaves.

Mosses and ferns are two types of primitive plants. Both plants are non-flowering plants. Therefore, both of them are seedless plants as well. Both mosses and ferns undergo alterations of generations. That means both are spore-producing plants. The gametophyte is prominent is mosses, but the sporophyte is prominent in ferns. The sporophyte of ferns is differentiated into true leaves, stem, and roots. In contrast, mosses lack true leaves, stem or roots. Ferns are vascular plants, but mosses are not. The main difference between mosses and ferns is the presence or absence of a vascular system.