Flagella are long, whip-like, helical appendages that protrude through the cell membrane. They are mainly composed of flagellin protein. Since flagella are motile, they are used for the locomotion of cells, moving towards or away from the source of stimuli like chemicals, light, air and magnetism.

A flagellum is anchored to both cell membrane and cell wall. It is composed of three parts: basal body, hook, and filament. Basal body and hook are embedded in the cell envelope, while the filament is free. The growth of the flagellum occurs at the tip. Hence, it can be regenerated once it is damaged. Basal body of the gram-positive bacteria consists of one pair of rings named S and M. Gram-negative bacteria contains two pairs of rings in the basal body named S, M, P, and L. The relative rotation of rings causes the propeller-like motion of the flagellum. Three types of flagella are found: bacterial, archaeal and eukaryotic. Eukaryotic flagella are thicker than prokaryotic flagella. The (9+2) microtubule arrangement occurs in eukaryotic flagella. Flagella in E. coli shown in figure 1. 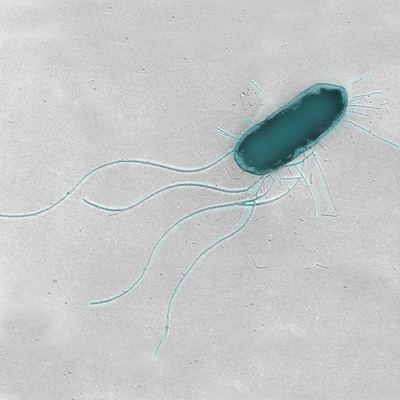 Pili are hollow, non-helical, filamentous appendages that protrude from the surface of the cell. They only occur in gram-negative bacteria. Pili originate from the plasma membrane and are mainly composed of pilin protein. Since pili are made up of proteins, they are antigenic. pili are shorter than flagella and straight. The name pili typically refer to sex pili while other pilus-like structures are called fimbriae. Pili are involved in the transformation of genetic material during conjugation. Hence, sex pili also called conjugative pili. A mating bridge is formed by pili between the donor and recipient bacteria, establishing a controlled pore that allows the transfer of DNA. Type IV pili are the other type of pili that are involved in the locomotion. They also allow the binding of bacterium to solid surfaces. Conjugative pili are shown in figure 2. 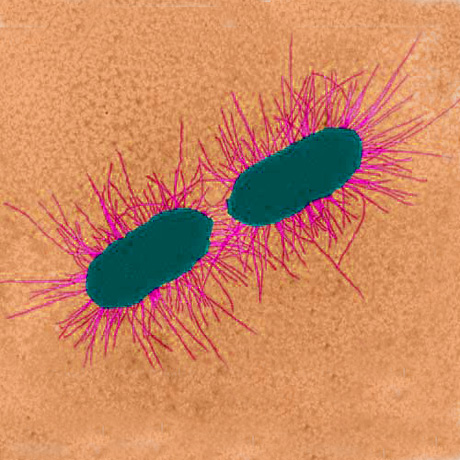 Difference Between Flagella and Pili

Flagella: Flagella are helical, but not straight.

Pili: Pili are non-helical and straight.

Flagella: Flagella are long and whip-like.

Pili: Pili are short and hair-like.

Flagella: Flagella are thicker than pili, 15-20 nm in diameter.

Flagella: The occurrence of flagella can be either polar, lateral or peritrichous.

Pili: Pili occur throughout the surface of the cell.

Pili: Pili are only found in gram negative bacteria.

Flagella: Flagella are made up of flagellin protein.

Pili: Pili are made up of pilin protein.

Flagella: Flagella are not required for conjugation.

Pili: Pili are required for conjugation.

Flagella: Flagella are mainly responsible for motility. They are sensitive to temperature, chemicals and metals.

Pili: Pili are mainly responsible for attachment during conjugation. They are involved in the motility as well.

Pili: A twitching motility is shown by type IV pili.

Flagella and pili are are two types of cellular protrusions mostly found in bacteria. Flagella are also found in eukaryotic cells. Flagella are thicker and longer than pili. pili occur in large numbers throughout the cell surface. Flagella are mainly involved in the locomotion. Hence, they are sensitive to environmental stimuli like chemicals and light. In contrast, pili are attachment appendages. They allow bacteria to attach to solid surfaces. Conjugative pili facilitate the DNA transfer between two cells. Therefore, the main difference between flagella and pili is their function in cells.