Home » Technology » IT » Programming » Difference Between OOP and POP

A programming paradigm is a fundamental style of arranging the structure and the elements of a computer program. It defines the style and capabilities of a programming language. A programming language can be classified into one paradigm or more paradigms. OOP and POP are two common paradigms. OOP divides the program into objects. POP divides the program into functions. It is difficult to do modifications to the code and to model real-world scenarios using POP. OOP was introduced to overcome the limitations of POP. 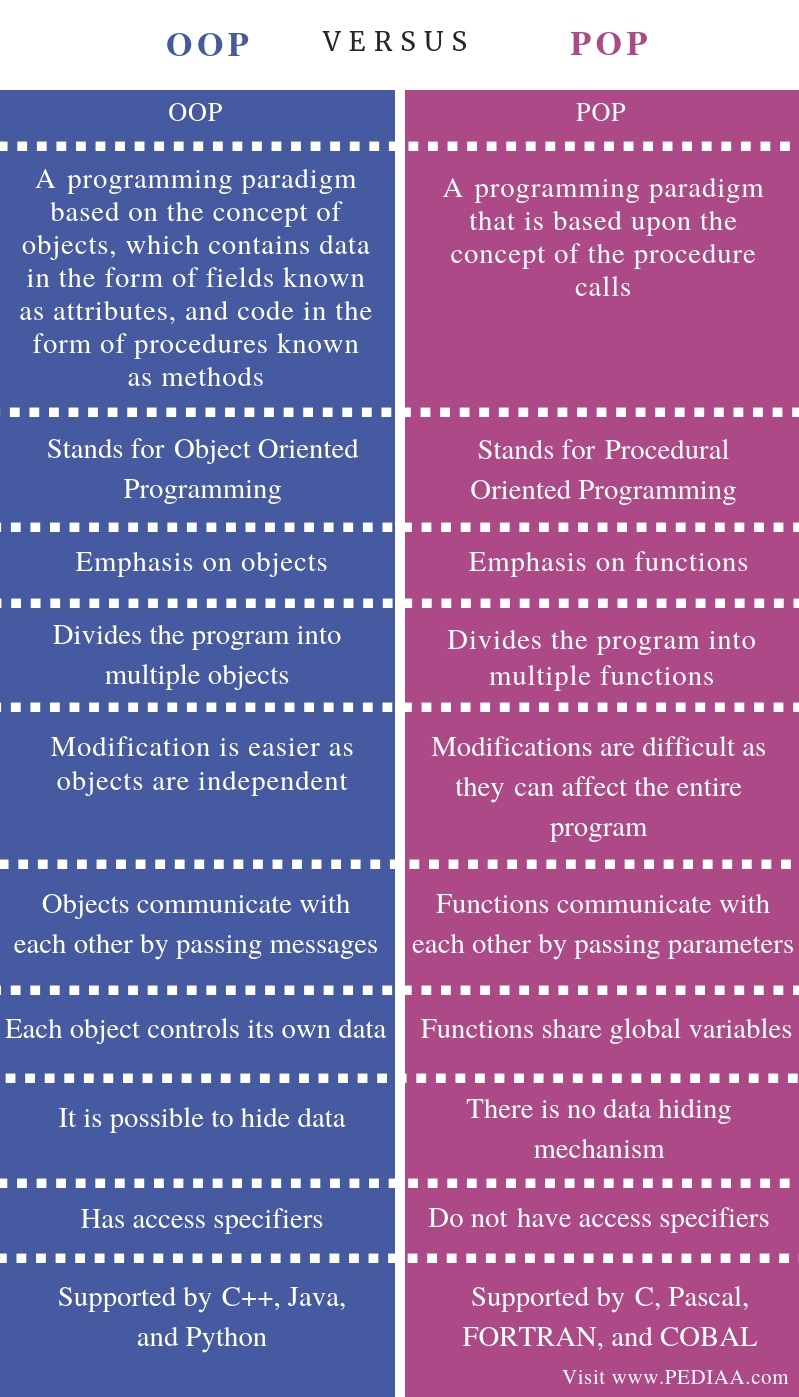 OOP (Object Oriented Programming) allows programmers to model real-world scenarios using objects.  An object is any entity that has a state and behavior. It is an instance of a class. A state is called the properties, attributes or data. Behavior is called a method. Student, Lecturer, Person, Course, Book, etc. are some examples of objects. These objects communicate with other objects by passing messages.

A class is a blueprint to create an object. Therefore, it is not possible to create objects without a class. For example, the object called Ann is created using the class Student. This object has states such as name, age, id, city, grade, and behaviors such as reading, walking, studying, eating, etc. The object and class are two fundamental concepts in OOP.

Furthermore, there are four major pillars in OOP. They are the inheritance, polymorphism, abstraction, and encapsulation. They are as follows.

Inheritance – When an object uses the properties and methods of an already existing object, it is called inheritance. It improves code reusability and maintainability.

Polymorphism – Allows an object to perform in multiple ways. Method overloading and method overriding are used to achieve polymorphism.

Abstraction – Hides the internal details and shows only the functionality. Abstract classes and interfaces are used to achieve abstraction.

Encapsulation – Binds the attributes and methods into a single unit.

Overall, OOP makes the development and maintenance easier. It secures the data and provides the ability to simulate real-world problems much more effectively.

POP stands for Procedural Oriented Programming. This paradigm focuses on procedures or functions that are required to perform the computation. It focuses on the process, rather than on data.

In POP, the program is divided into multiple functions. Each function has a clearly defined purpose. A function is a set of instructions to perform a certain task. These functions share global variables. Data is exchanged among functions.

On the other hand, there are a few drawbacks to POP. Since all functions share the same global variables, data is not very secure. If new data is added, all the functions have to be modified to access the data. Furthermore, it is also difficult to model real-world scenarios in POP.

Difference Between OOP and POP

While OOP emphasis on objects, POP emphasizes on functions. This is one main difference between OOP and POP.

Modification is easier in OOP as the objects are independent. Modifications in POP can affect the entire program. Therefore, modifications are difficult in POP.

In OOP, each object controls its own data. In POP, the functions share global variables.

It is possible to hide data in OOP. It avoids illegal access to the data or the attributes. Therefore, OOP makes data more secure. On the other hand, there is no data hiding mechanism in POP. This is another important difference between OOP and POP.

OOP has access specifiers such as private, protected, and public to change the visibility of attributes and methods. There are no access specifiers in POP. This is also an important difference between OOP and POP.

Although OOP has inheritance to reuse the already existing code, there is no inheritance in POP.

1. “CPT-OOP-objects and classes” By Pluke – Own work (CC0) via Commons Wikimedia