What is a Phrase

A phrase is a group of words that does not convey a complete thought. As phrases do not express a complete idea, they can’t stand alone. They can only be used as parts of sentences. It lacks a subject or a verb or in some cases both. Therefore, it cannot form a predicate. In the English language, there are five main kinds of phrases. They are,

Examples: a cute baby, an old lady, many of the theories, a hot summer day, some teachers, etc.

Examples: She has been eating, was walking, had to be hospitalized, singing a song etc.

Prepositional Phrase: gives information about a time, location or condition. A preposition always appears at the front of the phrase.

Examples: down the road, after a long time, beside the lake, on the table, etc.

A sentence refers to a group of words that expresses a complete thought. A sentence necessarily contains a subject and a verb. There are four types of sentences. They are as follows,

The Child is sleeping on the floor.

Radium was discovered by Marie Curie.

Imperative sentences issue commands or orders or they can express wishes or desires. These sentences can contain a single word, or they can be lengthier.

Interrogative sentences ask a question. They are easy to understand as they contain a question mark at the end. Example:

Did you go to school yesterday?

I won the first place!

Difference Between Phrase and Sentence

Phrase is a group of words that are arranged in a grammatical construction and acting as a unit in a sentence.

Sentence is a grammatical unit of one or more words that expresses an independent meaning.

Phrase does not express a complete thought.

Phrase does not contain both a subject and a predicate.

Sentence contains both subject and predicate.

Phrase does not give complete information about the subject or the predicate.

Sentence gives complete information about the subject or the predicate.

Phrase does not begin with a capital letter or end in punctuation marks.

Sentence begins with a capital letter and ends with a full stop, question mark or exclamation mark. 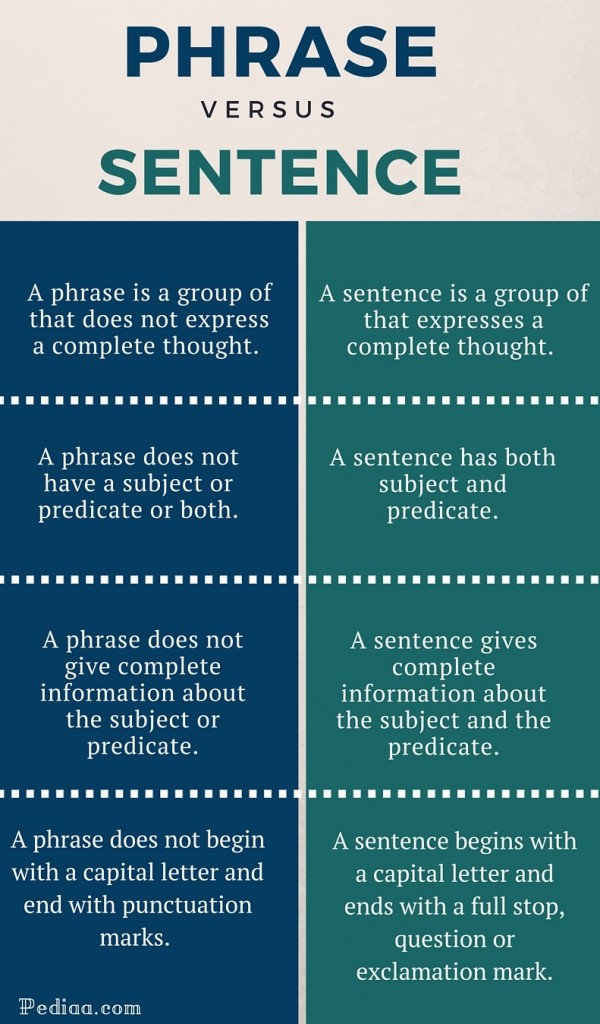