The main difference between placenta and uterus is that placenta is a temporary organ attached to the uterine wall, connecting the developing fetus to the uterine wall through umbilical cord whereas uterus is one of the main organs of the female reproductive system, conceiving and developing the young until birth. Furthermore, placenta only develops during pregnancy while the uterus is called the womb during pregnancy.

Placenta and uterus are two organs of the female reproductive system. Moreover, they are responsible for the development of the fetus, protecting and nourishing it.

The placenta is a flat, slab-like organ that develops during the pregnancy. Therefore, it is a temporary organ. Generally, the placenta begins to develop with the implantation of the blastocyst into the endometrium. Moreover, it expels from the body upon the birth of the fetus. Furthermore, the placenta is a fetomaternal organ, consisting of two components. They are the fetal placenta, which develops from the blastocyst, and maternal placenta, which develops from the maternal uterine tissue. 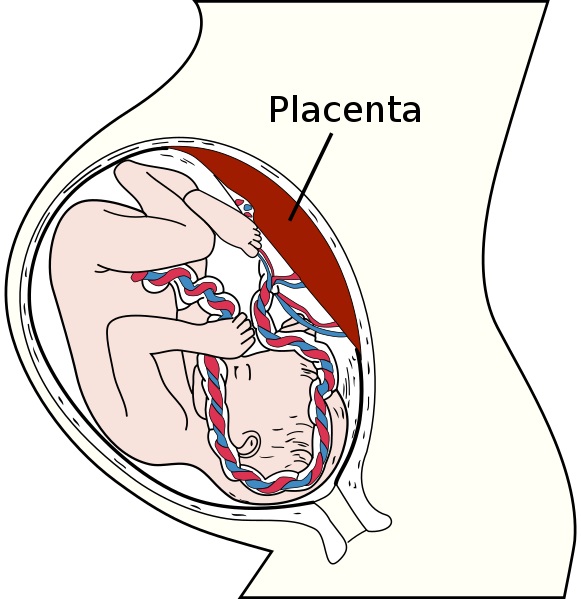 Furthermore, the type of placenta that occurs in placental mammals is a chorioallantoic placenta, forming from the chorion and allantois. The main function of the placenta is to connect the fetus to the uterine wall through the umbilical cord. Here, the umbilical cord inserts into the chorionic plate of the placenta. Moreover, the blood vessels inside the placenta form villous tree structures by branching out over the surface of the placenta. These structures form cotyledons by grouping into lobules on the maternal side. However, there are two types of blood circulation systems inside the placenta: maternal placental circulation and fetoplacental circulation. Moreover, maternal and fetal blood do not intermingle and this is known as the ‘placental barrier’.

What is the Uterus

The uterus is a pear-shaped organ of the female reproductive system, conceiving and developing the fetus during gestation. Moreover, the uterus conceiving a fetus is called the womb. Generally, the four regions of the uterus include fundus, corpus or the body, cervix, and cervical canal. The fundus is the uppermost region of the uterus, connecting to Fallopian tubes on either side. Moreover, the cervix makes a protrusion into the vagina. 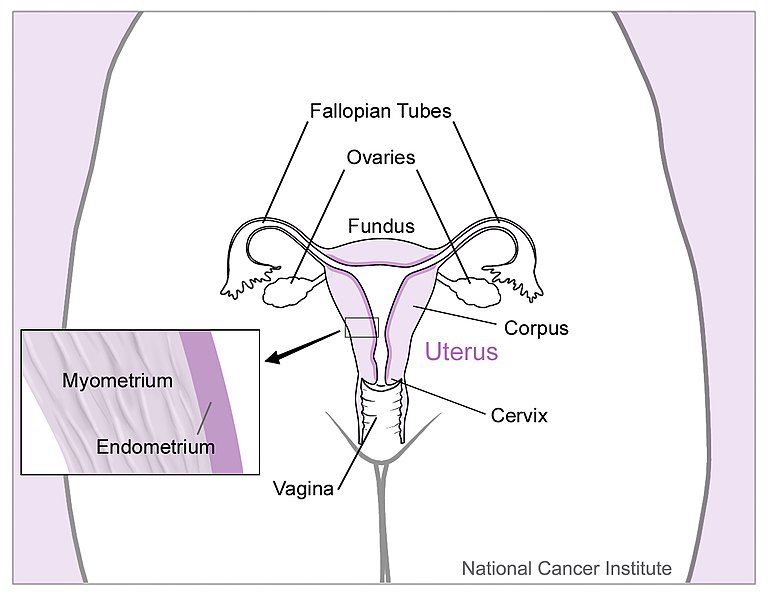 Similarities Between Placenta and Uterus

Difference Between Placenta and Uterus

Placenta refers to a flattened circular organ in the uterus of pregnant eutherian mammals, nourishing and maintaining the fetus through the umbilical cord, while uterus refers to the organ in the reproductive system of female mammals, conceiving and gestating the offspring before birth.

Placenta occurs in placental mammals, marsupials, and some non-mammals while uterus occurs in most of the mammals.

Moreover, placenta only develops during the pregnancy while uterus occurs inside the mother from birth.

The placenta attaches to the inside of the uterus and connects to the fetus through the umbilical cord while uterus occurs within the pelvic region immediately behind and almost overlying the bladder, and in front of the sigmoid colon.

Moreover, the placenta is a pancake-shaped organ while the uterus is a pear-shaped organ.

The placenta consists of two components: fetal placenta and maternal placenta while the four regions of the uterus are the fundus, corpus, cervix, and the cervical canal.

The placenta contains villous tree structures, which group into lobules on the maternal side, while the uterine wall has three layers: the endometrium, myometrium, and perimetrium.

Placenta serves as an endocrine gland by producing human chorionic gonadotrophin (hCG), estrogen, progesterone, and human placental lactogen (hPL) while the uterus responds to the hormones like estrogen and progesterone.

The placenta is a temporary organ developed inside the uterus during pregnancy. It is a flat organ, which contains villous tree structures. In addition, the main function of the placenta is to supply nutrients while allowing the elimination of wastes, gas exchange, and thermoregulation via the mother’s blood supply. The uterus, on the other hand, is one of the main organs in the female reproductive system of mammals. It is a pear-shaped organ and its wall consists of three layers: the endometrium, myometrium, and perimetrium. Moreover, the uterus is responsible for conceiving and the development of the fetus until birth. Therefore, the main difference between placenta and uterus is anatomy and function.