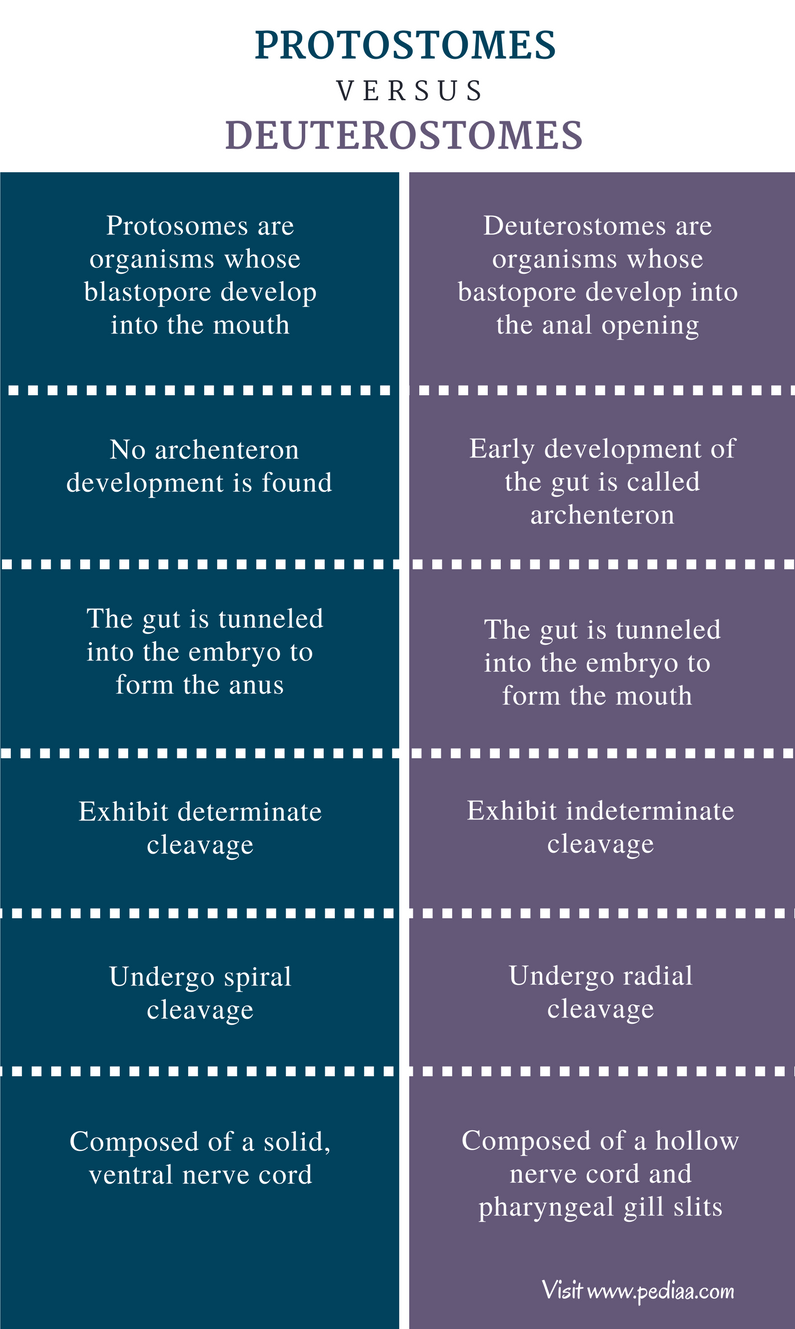 Protostomes belong to the clade Nephrozoa of Bilateria. In protostomy, the blastopore forms the mouth of the protostomes. During the development of the gut, protostomes first develop the mouth from the dent, blastopore. The anal opening is formed secondly by the tunneling of the gut through the embryo. Some bilaterian animal forms such as Acoelomorpha, consist of a single mouth with no anus. A solid mass of the embryonic mesoderm of protostomes splits to form a coelom. Thus, they are called schizocoelomates. The coelom cannot be identified in some protostomes such as Priapulids. Some phyla of protostomes exhibit spiral cleavage in the absence of large yolk concentration. Equal spiral cleavage is the most occurring and sometimes they undergo unequal cleavage. The developmental fate of the cells is determined during the early development of embryo. Thus, protostomes belong to the determinate cleavage. A solid, ventral nerve cord is found in protostomes.

Protostomes can be further divided into two superphyla: Ecdysozoa and Lophotrochozoa. Examples for Ecdysozoa are arthropods and nematodes whereas molluscs, annelids, platyhelminths and rotifers are the Lophotrochozoas. 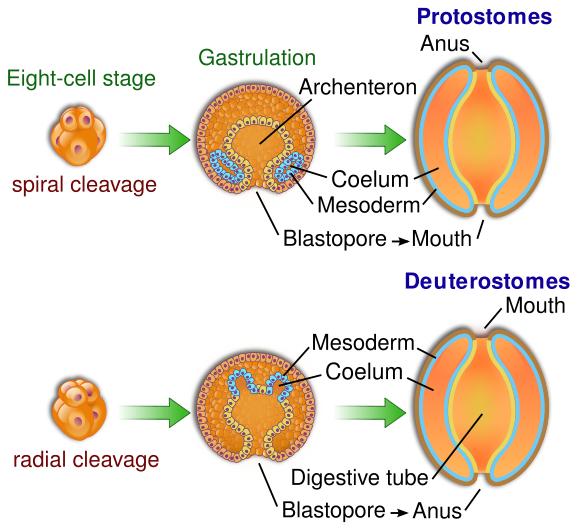 Figure 1: Fate of the Blastopore

Deuterostomes belong to the subtaxon: Deuterostomia of Bilateria. In deuterostomes, the original blastopore develops into the anal opening. Eventually, the gut is tunneled to form the mouth. The early development of the gut is referred to as the archenteron in deuterostomes. Longitudinal pouches of the archenteron forms the coelom of the deuterostomes. Thus, they are called enterocoelous. The coelom later develops into separated cavities. In the absence of large yolk concentration, deuterostomes exhibit radial cleavage. They have either parallel spindle axes to the polar axis of the oocyte or right angles to the polar axis. Their cytoarchitectural features are undisturbed. Therefore, deuterostomes belong to the indeterminate cleavage. Three major clades of deuterostomia is identified: Hemichordata, Echinodermata and Chordata. Deuterostomes consist of a highly modified nervous system. Crordata is containing a hollow nerve code. A tubular nerve code is contained by Hemichordatas. Deuterostomes are characterized by a hollow nerve cord, pharyngeal gill slits and circular and longitudinal muscles with a segmented body. Examples for Hemichordata are graptolites and acorn worms. Starfish, sea urchins and sea cucumbers are the examples of Echinodermata. Chordata are all vertebrates and their kin. 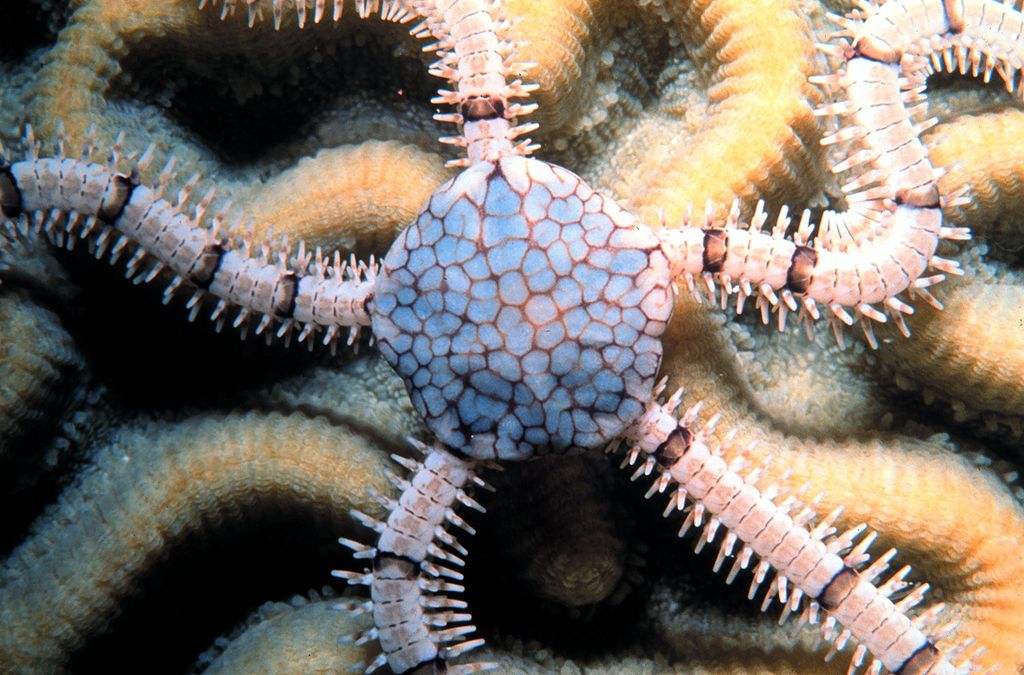 Difference Between Protostomes and Deuterostomes

Development of the Blastopore

Protostomes: The blastopore develops into the mouth.

Protostomes: No archenteron development is found in protostomes.

Deuterostomes: The early development of the gut is called archenteron in deuterostomes.

Later Development of The Gut

Protostomes: The gut is tunneled into the embryo to form the anus.

Deuterostomes: The gut is tunneled into the embryo to form the mouth.

Protostomes: Protostomes are called schizocoelomates, since the coelom is developed by splitting of the solid mass of the embryonic mesoderm.

Deuterostomes: Deuterostomes are called enterocoelous since the longitudinal pouches of the archenteron forms the coelom.

Type of the Holoblastic Cleavage

Protostomes: Protostomes are composed of a solid, ventral nerve cord.

Deuterostomes: Deuterostorms are composed of a hollow nerve cord and pharyngeal gill slits.