What are Sensory Neurons

Rod cells and cone cells in the retina are activated by light. This activates specialized nerves called retinal ganglia. The nerve impulses generated in the retinal ganglia are transferred to the brain via the optical nerve, sensing the sight. In sensing smell, the odor of a molecule dissolves in the mucus and attaches to microvilli. Dendrites of the sensory neurons are present in the microvilli. The contact of odor molecules with the dendrites stimulates the sensory neurons to send the impulses to the brain, sensing the smell.  Tastes buds are also sensory neurons which are present on the tongue. The sensory neurons in the tongue work cooperatively with the olfactory neurons in the nose.  Free nerve endings and corpuscles are the two types of neurons found on the skin. Free nerve endings are embedded in the dermis. They detect mechanical stimuli like touch, pressure, and stretch. They also detect temperature and danger (nociception) as well. The inner hair cells in the ear stimulate the afferent audio nerve and signals send to the brain, allowing an organism to sense different sounds.

What are Motor Neurons 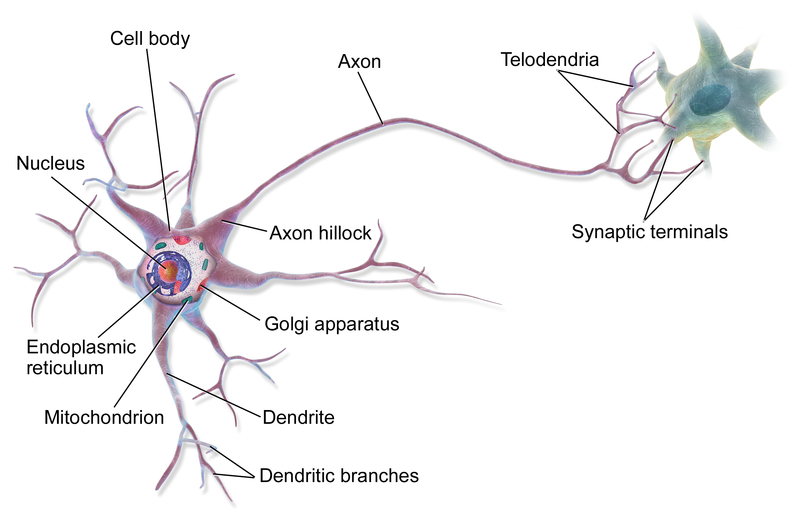 Difference Between Sensory and Motor Neurons

Motor Neurons: Motor neuron is a nerve cell whose cell body is located in the spinal cord and axon fiber projects outside of the spinal cord. It directly or indirectly controls effector organs like muscles and glands.

Motor Neurons: Motor neurons do not consist of a receptor.

Sensory Neurons: Cell body of the sensory neuron is situated in the dorsal root ganglion of the spinal cord, and no dendrites are found in it.

Motor Neurons: Cell body of the motor neuron situated in the ventral root ganglion of the spinal cord and consists of dendrites.

Sensory Neurons: Sensory neurons carry signals from the outer part of the body into the central nervous system.

Motor Neurons: Motor neurons carry signals from the central nervous system to the outer parts of the body.

Sensory Neurons: An adult has around 10 million sensory neurons in the body.

Motor Neurons: Around half million of motor neurons are found in the body.