Serum and plasma are two derivatives of blood which lack blood cells like red blood cells, white blood cells, and platelets. Both contain proteins, drugs, hormones, toxins, and electrolytes. Both serum and plasma have therapeutic and diagnostic uses. They can be separated from blood by centrifugation, which removes the cellular portion of blood. Anticoagulants are added to blood once it is transfused in order to prevent clotting. The serum is amber-colored but plasma is straw-colored. The main difference between serum and plasma is that serum is the protein-rich liquid, which separates out when blood coagulates whereas plasma is the liquid component of blood which holds blood cells in whole blood in suspension.

The serum is an amber-colored, watery portion of animal blood, which remains after blood coagulation. Hence, serum lacks blood cells like red blood cells, white blood cells, and platelets. It also lacks clotting factors like fibrinogen. But, serum contains all the proteins like albumin, and globulin that are not involved in blood coagulation process. It also contains antibodies, antigens, electrolytes, hormones, drugs, and microorganisms. Serology is the study of serum. The serum is separated from blood by centrifugation, which removes the cellular component of blood, which is followed by coagulation. Coagulation removes clotting factors like fibrinogen, prothrombin, and tissue thromboplastin from the blood. The serum is a good source of electrolytes. It is used for various diagnostic tests for hormones and enzymes. It is used for the determination of blood groups as well. Animal sera are used as anti-venom, anti-toxins, and vaccinations. The serum can be stored at 2-6 ºC for several days. 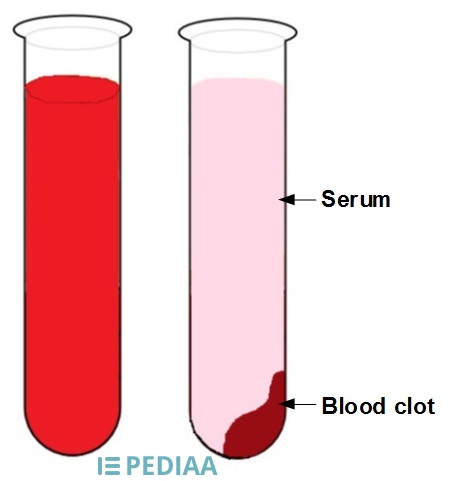 Plasma is the liquid portion of blood. It is a straw-colored, protein-salt solution which suspends blood cells and platelets. Hence, plasma serves as an extracellular fluid. It takes up 55% of the total volume of blood. The water content in the plasma is about 92%. Plasma contains dissolved proteins like albumin, globulin, and fibrinogen, glucose, clotting factors, hormones, electrolytes, carbon dioxide, and oxygen. It maintains a satisfactory blood pressure and volume, balances the body pH, and serves as a medium for exchanging minerals like sodium and potassium.

Plasma is separated from its cellular portion by centrifugation. Four units of plasma are diluted with one part of the anticoagulant, citrate phosphate dextrose (CPD) up to a total volume of 300 mL. When the plasma sample is frozen within 8 hours of collection, it is called fresh-frozen plasma (FFP). When it is frozen longer than 8 hours but less than 24 hours, the plasma sample is called frozen plasma (FP). After preservation by adding anticoagulants, frozen plasma can be stored up to one year at -18 ºC. Plasma transfusion is done for trauma patients, patients with severe liver diseases, and in multiple clotting factor deficiencies. Plasma derivatives like special plasma proteins can be obtained by fractionation.  Viruses that cause HIV, hepatitis B and C are destroyed by treating with heat or solvent detergents. Scheme of a blood sample after centrifugation is shown in figure 2. 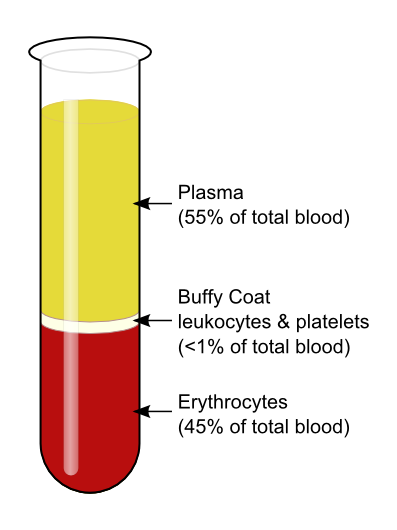 Figure 2:  Scheme of a blood sample after centrifugation

Difference Between Serum and Plasma

Serum: Serum is an amber-colored, protein-rich liquid, which separates when blood coagulates.

Plasma: Plasma is a straw-colored, liquid component of blood in which blood cells are suspended.

Serum: Serum is the part of the blood which does not contain blood cells and clotting factors.

Serum: Serum is acquired from the spinning after clotting.

Plasma: Plasma is acquired from the spinning before clotting.

Serum: No anticoagulants are required for the separation of serum from blood.

Plasma: Anticoagulants are required for the separation of plasma from blood.

Serum: Serum is difficult to separate and time-consuming.

Plasma: The separation of plasma is comparatively easier and less time-consuming compared to serum.

Serum: The volume of serum is less than that of plasma.

Serum: Serum is used for enzyme tests and hormone tests.

Serum: Serum can be stored at 2-6 ºC for several days.

Plasma: After preservation by adding anticoagulants, frozen plasma can be stored up to one year at -18 ºC.

Image Courtesy:
1. “Blood-centrifugation-scheme” By KnuteKnudsen at English Wikipedia (CC BY 3.0) via Commons Wikimedia