What are Red Blood Cells

Red blood cells are the type of cells found in the blood of animals, differentiating into transport of gases. They are also called “Erythrocytes”. The diameter of RBCs is around 6 µm; this size enables them to squeeze through small blood capillaries in the body. RBCs are the most common type of cells found in blood. There are around 4 to 6 million cells per cubic millimeter of blood. The lifetime of blood is 120 days. Macrophages in spleen and liver are involved in the clearing off the old blood cells from the system. RBCs are found in different colors due to the presence of pigments like hemoglobin, hemocyanin, chlorocruorin, hemerythrin and hemovanadin. Hemoglobin is found in vertebrates, and it gives a bright red color to the RBCs as well as the vertebrates’ blood. Mollusks contain hemocyanin in their RBCs, which gives a blue color to the blood. Annelids contain green color chlorocruorin in their RBCs and marine invertebrates contain violet-pink color hemerythrin in their RBCs. Mustered yellow color hemovanadin is found in ascidians and tunicates.

The process which produces RBCs is called “Erythropoiesis”. By erythropoiesis, 2 to 3 million of RBCs are produced and released into the circulation by bone marrow. Mature RBCs of mammals do not contain a nucleus as a differentiation for the efficient transport of oxygen by storing more hemoglobin inside the RBC. The biconcave shape of the cells also increases the ability to transport more oxygen by increasing the surface area for the diffusion of oxygen per RBC. In contrast, non-mature mammals like fish and birds contain a nucleus in their RBCs. Anemia is caused by the reducing levels of hemoglobin in RBCs in the circulatory system. Genetic defects in hemoglobin also form disease conditions like sickle cell anemia. Red blood cells are shown in figure 1. 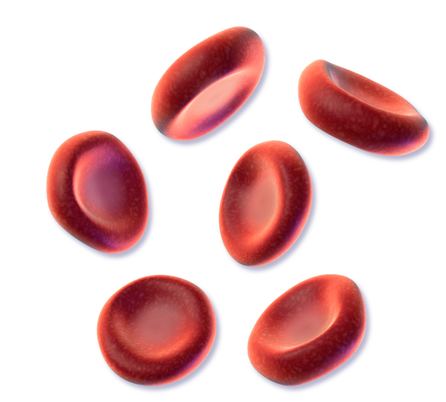 What are White Blood Cells

White blood cells (WBCs) are another type of blood cells found in blood, involved in the defense mechanisms of the body of animals by destroying pathogens. They are also called “Leukocytes”. WBCs are different with each other by shape and size. The nucleus of some WBCs consists of multiple lobes. Some nuclei are large and round. Some of the WBCs contain granules in their cytoplasm. Hence, they are called granulocytes. Other than the shape, WBCs consist of various functions in the immune system of the body.

Five types of WBCs are found in the blood. They are neutrophils, basophils, eosinophils, lymphocytes and monocytes. Neutrophils contain a poly-lobed nucleus, which is irregular in shape. Hence, they are called polymorphonuclear cells. They are ganulocytes containing granules filled with enzymes in order to digest pathogens. Monocytes are developed into macrophages when they migrate into tissue, engulfing and digesting pathogens. They possess an immediate response prior to the entrance of other WBCs into the infected area. Kupffer cells in the liver are kind of macrophages, removing harmful agents in the blood. The inhaled harmful agents are destroyed by Alveolar macrophages in lungs. Old and defective RBCs are removed from the circulation by macrophages in the spleen. Macrophages also serve as antigen-presenting cells, triggering immune systems.

B lymphocytes and T lymphocytes are the two types of lymphocytes found in the blood. B lymphocytes mature in bone marrow whereas T lymphocytes mature in the thymus. Their nuclei are single, round and large. Activated B cells are known as plasma cells, producing specific antibodies to trigger an immune response. T cells coordinate with other immune cells by secreting chemicals. Both eosinophils and basophils are granulocytes. Eosinophils are involved in the triggering of inflammatory response in allergic disorders. The anticoagulant, heparin is contained in basophils, preventing the quick blood clotting. During an inflammatory response, WBC count increases. Deficiency of macrophages increases the risk of bacterial infections. The deficiency of T cells increases the risk of viral infections. The five types of WBCs are shown in figure 2. 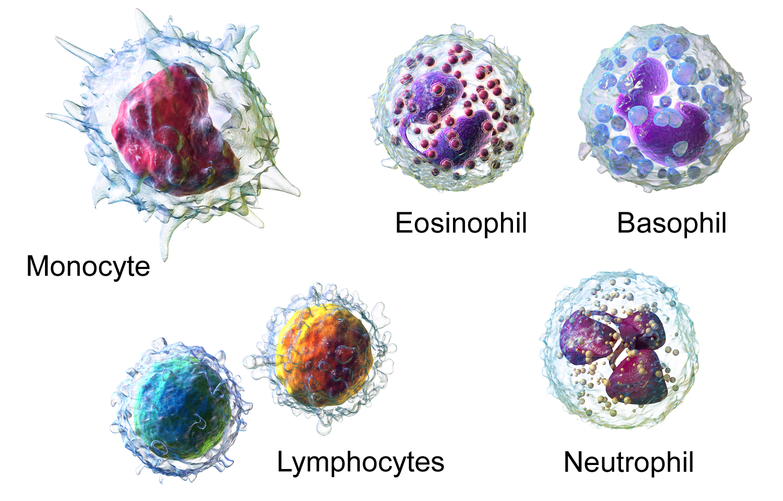 Red Blood Cells: RBCs are red in color due to the presence of hemoglobin.

White Blood Cells: WBCs are mostly produced in bone marrow. Lymph nodes and spleen are also responsible for the production of RBCs.

Red Blood Cells: The production rate is about 2 million RBCs per second.

Red Blood Cells: The diameter of RBCs is 6-8 μm.

White Blood Cells: WBCs are usually rounded in shape. But, sometimes they are irregular-shaped or ameoboid.

Number of cells per mm3

Red Blood Cells: The number can be increased due to exercising or living in high altitudes.

White Blood Cells: The number is increased as a response to infections.

Red Blood Cells: No nucleus is present in RBCs after maturity.

White Blood Cells: WBCs are involved in the defense mechanisms.

Red Blood Cells: RBCs live for 120 days from their formation.

Red Blood Cells: 40-45% of the total volume of blood accounts for RBCs. It depends on the sex, height and weight.

White Blood Cells: Only 1% of the total volume of blood accounts for WBCs.

Red Blood Cells: A single type of RBCs are found in a particular species.

White Blood Cells: No Rouleaux formation can be found in WBCs.

White Blood Cells: WBCs are capable of coming out from blood vessels into connective tissues and lymphatic system.

Red blood cells and white blood cells are found in blood, circulating throughout the body via blood vessels of the circulatory system. WBCs are capable of migrating into tissues as well as the lymphatic system. Both RBCs and WBCs are differentiated for the functions they perform. RBCs have a vital function in transporting gases like oxygen and carbon dioxide. In mammals, the pigment hemoglobin gives a bright red color to the blood, binding to oxygen. The biconcave shape allows more oxygen to be transported by RBCs. Five types of WBCs are found in the blood: neutrophils, basophils, eosinophils, lymphocytes and monocytes. They are involved in the triggering of immune response and destroying pathogens by engulfing them. Mature RBCs in mammals lack nucleus while WBCs consists of differently shaped nuclei in their cells. WBCs also contain granules in order to enzymatically digest pathogens. Therefore, the main difference between red blood cells and white blood cells is their structure and functions.