Unemployment and inflation are two economic determinants that indicate adverse economic conditions. Economic analysts use these rates or values to analyze the strength of an economy. It’s been found that these two terms are interrelated and under normal conditions have a negative relationship between two variables.

The unemployment rate is the percentage of employable people in a country’s workforce. The term employable refers to workers who are over the age of 16; they should have either lost their jobs or have unsuccessfully sought jobs in the last month and must be still actively seeking work. The formula used to calculate unemployment rate is:

Structural unemployment: the unemployment that occurs when changing markets or new technologies make the skills of certain workers obsolete.

Frictional unemployment: the unemployment that exists when the lack of information prevents workers and employers from becoming aware of each other. This is usually a side effect of the job-search process, and may increase when unemployment benefits are attractive.

Cyclical unemployment: type of unemployment that occurs when there is not enough aggregate demand in the economy to provide jobs for everyone who wants to work.

There are two types of inflation:

Cost-push inflation: this occurs when there is a rise in the price of raw materials, higher taxes, etc.

Demand-pull inflation:  this occurs when the economy grows quickly. Aggregate demand (AD) will be increasing faster than aggregate supply. Then automatically create the inflation.

Relationship Between Unemployment and Inflation

Graphically, when the unemployment rate is on the x-axis, and the inflation rate is on the y-axis, the short-run, Phillips curve takes an L-shape. It can be shown by a graph as below. 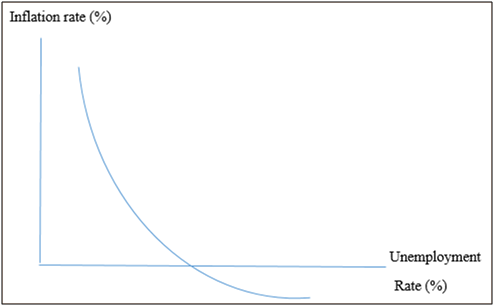 When unemployment rises, the inflation rate will possible to fall. This is because:

Unemployment and inflation are two economic concepts widely used to measure the wealth of a particular economy. Unemployment is the total of country’s workforce who are employable but unemployed. On the other hand, inflation is the increase in prices of goods and services available in the market. There is a considerable relationship between unemployment and inflation. This relationship was first identified by A.W.Philips in 1958. Low unemployment rate and low inflation rate are ideal for the development of a country; then the economy would be considered stable.