Home » Science » Biology » What is the Difference Between Binucleate and Dikaryotic

Binucleate and dikaryotic are two nuclear features that occur in different cells. Both conditions have two nuclei inside a cell. 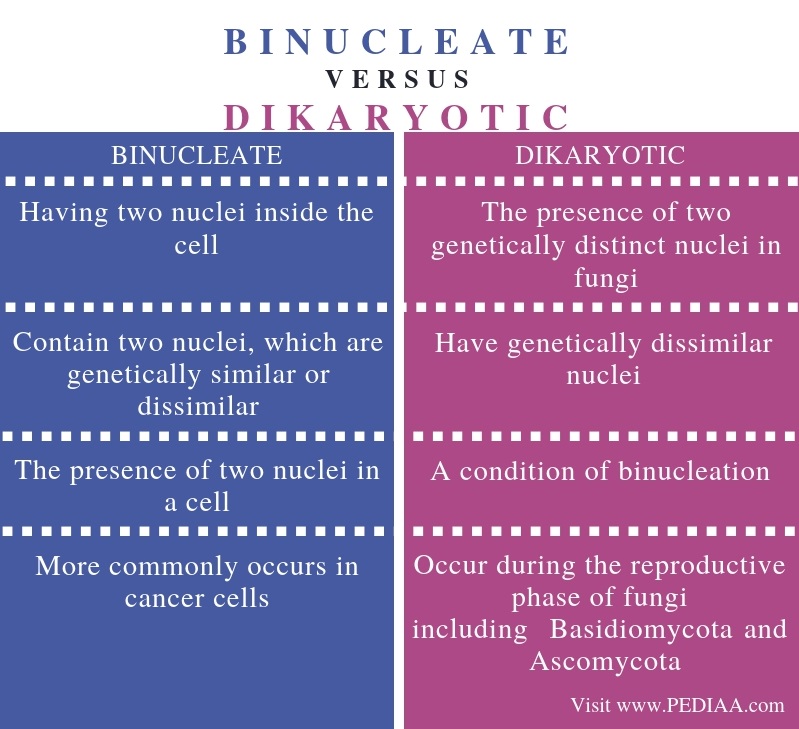 Binucleate is a condition of cells having two nuclei inside the same cell. This condition can be easily visualized in cancer cells under the microscope. The other distinguishing features of cancer cells include multipolar spindles, chromatin bridges, and micronuclei. However, binucleation also occurs in hepatocytes and chondrocytes under physiological conditions. Moreover, the four causes for binucleation are the regression of the cleavage furrow, failed cytokinesis, multipolar spindles, and merging of newly-formed cells. 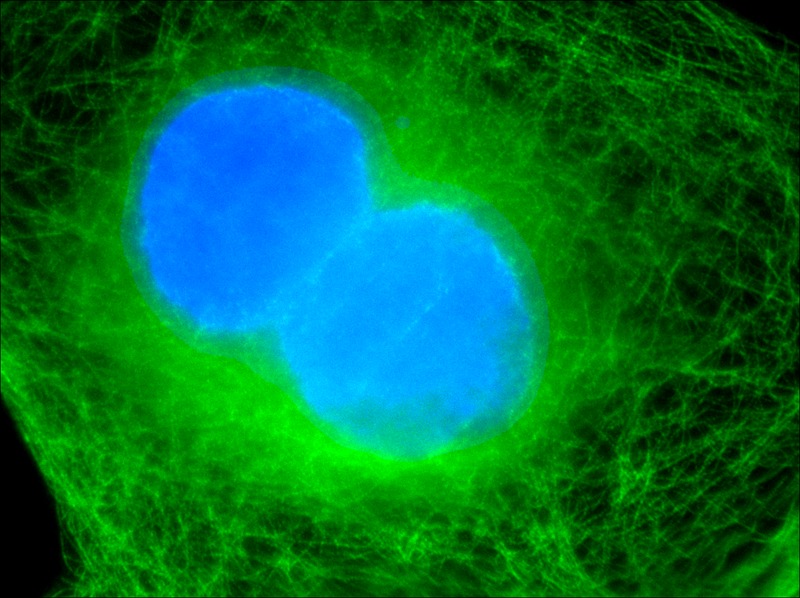 Generally, binucleation has negative effects on cell viability as well as subsequent cell division. Usually, most of the binucleated cells remain in the interphase but, never enter into the mitotic phase. However, mutated cells that undergo subsequent binucleation are more prone to proceed with mitosis. Generally, 95% of the binucleated cancer cells progress through mitosis, while 50% of the normal cells with two nuclei progress through mitosis. However, the subsequent mitosis creates higher rates of mutations in chromosomal disjunctions.

Dikaryotic is the presence of two genetically distinct nuclei in fungi. Generally, compatible cell types from two different mating types of a fungus undergo the fusion of cytoplasm in an event called plasmogamy. Significantly, the resulting cells have two nuclei, each belonging to separate mating types. Furthermore, these nuclei cohabit the cytoplasm without undergoing fusion in a process called karyogamy. Therefore, these fungal hyphae can maintain the dikaryotic stage over generations by synchronous dividing, which passes the two nuclei to new cells in pairs. 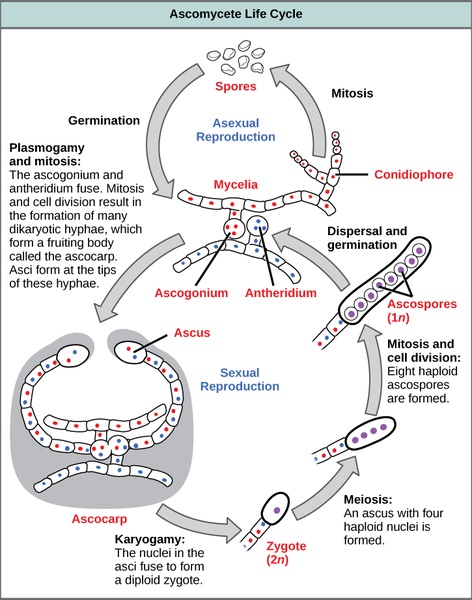 Similarities Between Binucleate and Dikaryotic

Difference Between Binucleate and Dikaryotic

Binucleate refers to having two nuclei inside the cell while dikaryotic refers to the presence of two genetically distinct nuclei in fungi.

Moreover, binucleation is the presence of two nuclei in a cell ,while dikaryon is a condition of binucleation.

While binucleation more commonly occurs in cancer cells, dikaryotic cells occur during the reproductive phase of fungi ,including  Basidiomycota and Ascomycota.

Binucleate cells are a type of cells with two nuclei. However, the two nuclei in the cell can be similar or dissimilar by means of genetics. Generally, binucleation is more common in cancer cells. Also, under physiological conditions, it can occur in hepatocytes, chondrocytes, and in dikaryotic fungi. Therefore, dikaryon is a condition of binucleation. Furthermore, dikaryotic cells occur during the reproductive phase of fungi ,including Basidiomycota and Ascomycota. The two nuclei in dikaryotic cells are genetically dissimilar as they originate from two different mating types of fungi. Hence, the main difference between binucleate and dikaryotic is the type of nuclei.