Ascomycota is a division of fungi characterized by the formation of asci and ascospores endogenously. It is one of the largest and morphologically diverse groups of fungi. There are around 60,000 well-known species of Ascomycota. The group ranges from the unicellular yeast to the multicellular cup fungi. Half of the members of the division involve in the formation of lichens. Others form mycorrhizal relationships with plants. Very few of them are animal and plant pathogens.

Furthermore, the main characteristic feature of Ascomycota is the formation of four to eight sexual spores inside a microscopic sac called ascus. Hence, they are known as sac fungi. Ascocarps bear these asci. However, the main form of reproduction of Ascomycota is the asexual reproduction, which occurs through the formation of numerous asexual spores called conidia. Generally, conidia are formed at the tips of fungal hyphae. 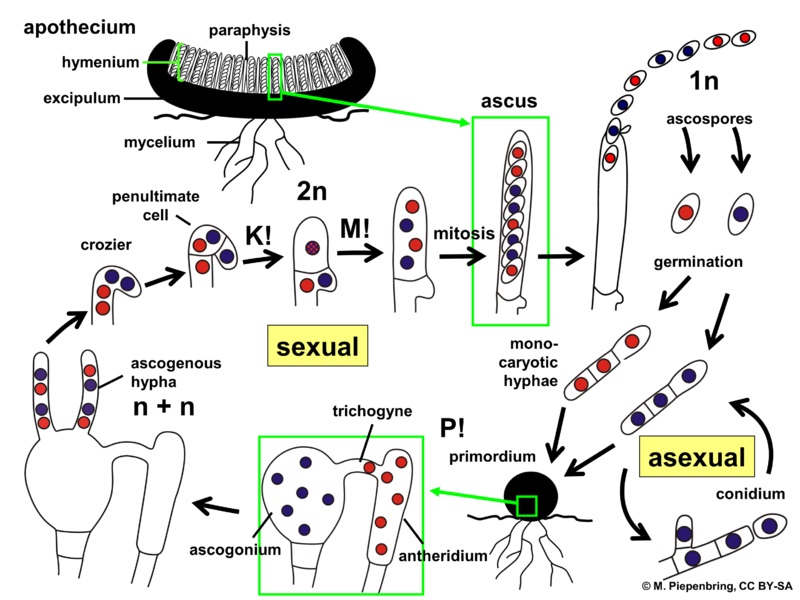 Prior to undergoing sexual reproduction, compatible haploid mating-type hyphae (+ and -) fuse to form a dikaryotic hypha, which eventually gives rise to the ascocarps and ascospores. Here, the intertwining of the two mating type hyphae forms an ascogonium and an antheridium. Ascogonium is the female part and it accepts the nuclei from the antheridium following the plasmogamy. Then, this structure forms the cup-shaped ascocarp. After the formation of asci, karyogamy occurs, forming a highly transient diploid nucleus. The meiosis of this nuclei results in four haploid nuclei, which may undergo an additional round of mitosis to form 8 nuclei or ascospores. Finally, the germination of the ascospores forms the haploid mycelia.

Basidiomycota is a division of fungi characterized by the formation of basidia and basidiospores exogenously. Moreover, due to the presence of sexual spore-bearing cells called basidia, the fungi under Basidiomycota division are called club fungi. Here, millions of spores occur on the club-shaped basidia located on the surface of gills. Therefore, another name of Basidiomycota is gill fungi. Around 25,000 species of Basidiomycota have been identified so far. These fungi can be either decomposers, mycorrhizal or plant pathogens. Additionally, Basidiomycota is capable of breaking down large polymers in the plant cell wall such as lignin. 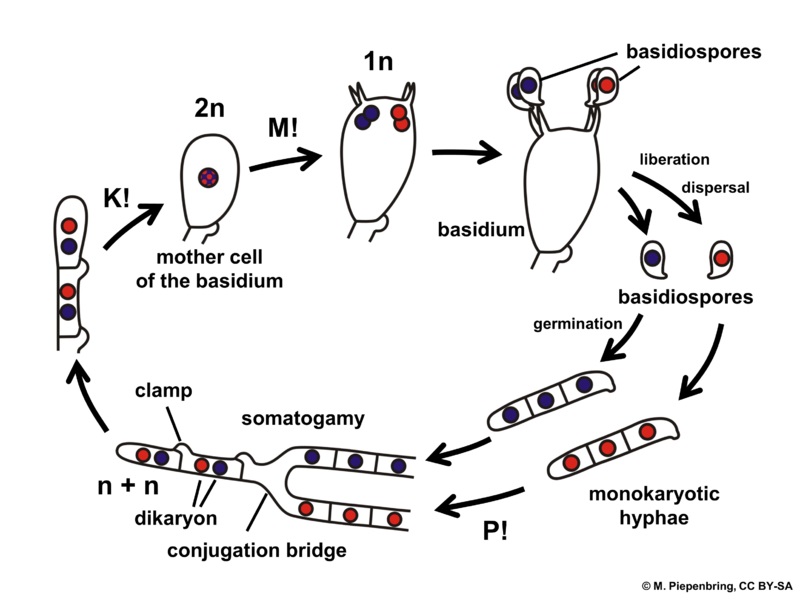 Moreover, sexual reproduction is the most prominent form of reproduction in Basidiomycota. It starts with the fusion of two, haploid, mating-type hyphae (+ and -) to form a dikaryotic hypha. These dikaryotic hyphae are capable of producing a fruit body or a gilled mushroom under favorable environmental conditions. Then, basidia forms on the surface of the gills. After that, the karyogamy produces the diploid nucleus in each basidium followed by the immediate meiosis to form four haploid nuclei. Each nucleus migrates into the appendages and develops into basidiospores, which migrates via wind and germinate to produce haploid hyphae.

Similarities Between Ascomycota and Basidiomycota

Difference Between Ascomycota and Basidiomycota